Nations like South Africa that are committed to improving their existing healthcare systems can learn a great deal from the manner in which the leaders of Singapore planned and implemented healthcare in their country.

South Africa and Singapore are very different nations, of course, except for one important factor: both are committed to providing high-quality, sustainable, cost-effective systems of care for their people.

With South Africa embarking on its ambitious plan to implement a  national health insurance scheme, I would like to offer some ideas from my study, titled Affordable Excellence: The Singapore Healthcare Story, that might prove interesting or useful to healthcare policymakers here.

Why study Singapore? The quality of its healthcare is among the best in the world, with measurable outcomes as good as or better than those of the highest-income nations: the World Health Organisation has ranked Singapore sixth in terms of overall performance.

Some widely acknowledged key measures of the quality of care include life expectancy, under-five mortality rates and maternal mortality rates. In these and other measures, Singapore has achieved some of the best scores in the world – in many cases better than those of developed countries such as the United States (see graphic). Its cancer survival rates are similar to Europe's, and its cardiovascular disease death rate is half that of the rest of the Asia-Pacific region.

Singapore spends 4.6% of its gross domestic product gross domestic product on its healthcare versus, for example, 17.9% of GDP in the United States and 9.3% in the United Kingdom, according to World Health Organisation figures. So not only does Singapore produce results that rival those of the world's most developed nations, it also does so at a fraction of the cost (see graphic).

Many say Singapore is merely a tightly governed city-state without the complications and complexity of a country like South Africa, so its methods and achievements may not be applicable elsewhere.

As a scientist, I am trained to look at "proof of principle" – working examples that do what they are supposed to do. Singapore's healthcare system does what it is supposed to do – deliver high-quality care at a very low cost. It works, and so has something to teach us, even if we are unwilling or unable to replicate exactly what they have done.

There is another response to these concerns: megacities are becoming the new unit of government in many regions of the world and, with the growth of Johannesburg and Cape Town, the phenomenon is very relevant to South Africa.

Megacities around the world are taking the initiative to grow their economies, prepare their infrastructures for business, trade globally, set environmental policies and attract innovative business leaders. In this new world environment, the lessons of Singapore become more relevant than ever.

With a 14-year timetable for implementing a national health insurance scheme in South Africa, the programme is likely to encounter some unforeseen challenges along the way, and perhaps some usable ideas and inspiration will be found in Singapore's example. 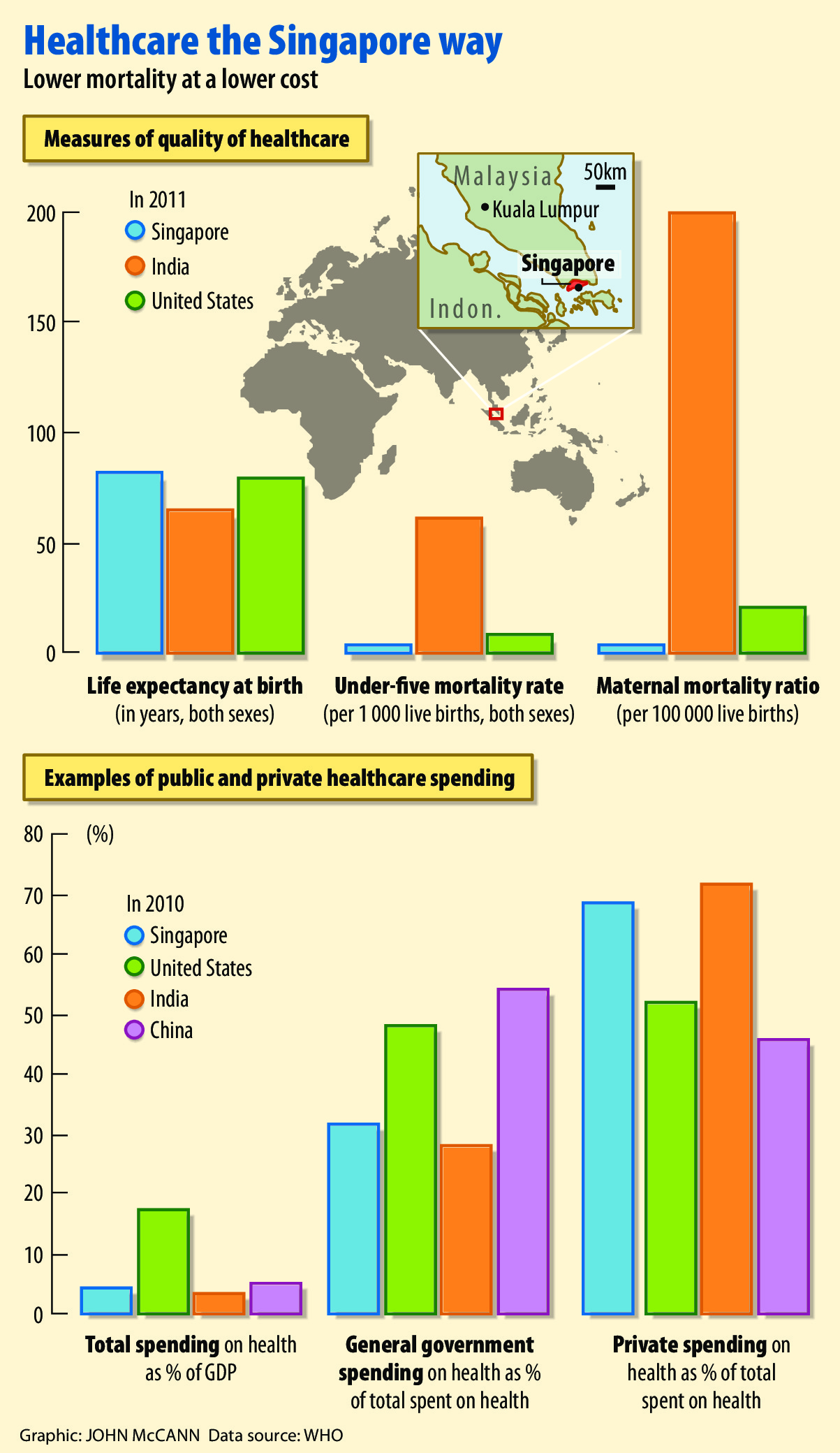 Laying the groundwork
The earliest steps taken by the government were aimed at generally improving public health through the control of prevalent infectious diseases, establishing systems for proper sanitation and developing sources of clean water and food.

Once these goals were reached, planners were able to turn their attention to building the healthcare infrastructure, including community primary care centres and regional hospitals providing variously designated levels of care.

Establishing fees
Like South Africa, Singapore wanted to create a system that would provide a basic level of care for all people, regardless of their income or station in life, but it carefully avoided the notion of "free" healthcare for all.

Singaporeans bear a portion of the costs of their medical treatment in the form of co-payments, which are often higher than in other nations' systems. The idea is that patients will be more careful in their use of medical services if they know they must share in the cost.

Singapore's first prime minister, Lee Kuan Yew, sounded the note in the earliest days of independence. Unhappy with what he saw as the debilitating effects of Britain's dedication to "free" medical care for all, he was determined to add a sense of personal responsibility to Singapore's approach to care.

Savings programmes
In order to ensure that the people of Singapore could afford co-payments and other out-of-pocket medical costs, the government established a medical savings account for individuals called Medisave, a mandatory savings account that is an expansion of the central provident fund.

The provident fund, as it is known, is a useful remnant of British rule – a mandatory retirement savings plan aimed at helping Singaporeans to build their retirement nest eggs.

With Medisave, workers contribute a specified percentage of their salary to their account, as do their employers. They can use the Medisave funds in the account to pay for health and medical services as well as for health insurance premiums. The funds can be applied to expenses incurred by account owners as well their family members.

Health insurance
A system of health insurance was also created to help individuals to pay for their medical needs. The system included both public-sponsored and private insurance, both carefully regulated by the government.

The policies are kept affordable through competition and government intervention, but they include the use of deductibles and co-payments, in keeping with the notion of promoting individual responsibility.

The most prevalent type of insurance is catastrophic insurance, covering the partial cost of expansive or long-term treatment.

With insurance in place, patients must usually pay 20% of the cost of such care through co-payments.

Levels of service
Public hospitals in Singapore provide different levels of amenities that carry different cost structures. Though access to the same doctors and types of treatment is assured for patients at every level, the amenities differ, from open wards with shared bathrooms to private rooms, the absence or presence of air conditioning or having physicians assigned and the option of calling in private doctors.

As amenities move beyond the basic level, subsidies decrease, and the cost to the patient increases.

Price and transparency
Singapore's ministry of health publishes on its website the hospital bills for common illnesses, treatments and ward classes.

Patients can look up the costs of specific surgeries and tests. One simple example of the effectiveness of controlling prices through transparency is the dramatic drop in price for Lasik eye surgery, from 2 300 Singapore dollars (about R18 000) per eye in 2004 to S$1 400 in 2008.

When consumers can see pricing information they can shop for services, a concept that has found its way into most purchasing experiences – except healthcare.

Developing competition
Singapore sees the healthcare market as a quasi-capitalist market. In the early 1990s, with healthcare costs soaring, the architects of the system decided something had to be done.

In 1993 they issued a white paper titled Affordable Health Care that, among many other important goals, set the goal of engaging competition and market forces to improve service and raise efficiency, and opened the way for the state to intervene directly in the healthcare sector when the market failed to keep costs down.

And intervene is what the state has done and continues to do, controlling the number of doctors practising in the country, stepping in when necessary to prevent oversupply of services – moderating demand and creating incentives to keep costs down.

Wages of doctors in the public sector are kept reasonable. They are periodically reviewed with the goal of keeping them competitive with the private sector.

The private sector continues to thrive, serving patients who wish to pay more for certain services, and still competes with public sector facilities on price and quality.

Dr William A Haseltine is president of Access Health International and the author of Affordable Excellence: The Singapore Healthcare Story