She sits alone on a bench in a spacious garden. She coughs once. She coughs again. As the cough takes over, her whole body convulses. She coughs so violently that pieces of her hair, neatly tucked away in a long dark plait, come loose and mask her face. She covers her mouth with her left hand and tries to stifle the cough until it eventually subsides. She slowly moves her hand away from her mouth. Her palm is covered in blood. She looks up into the distance with pain in her eyes and blood on her lips.

Bollywood actress Sonakshi Singh plays Pakhi Roy Chaudhary in this scene from the recent film Lootera. In the film, set in 1950s India, a troubled romance plays out between the two main characters, set against  Pakhi's slow death from tuberculosis (TB).

"TB was a popular choice of Indian filmmakers in the past," says Jaya Shreedhar, a professor of health journalism at the Asian College of Journalism in India.

Before the days of special effects, according to Shreedhar, TB was relatively easy to portray with "lots of coughing and dark shadows under the eyes and nine times out of 10 the character with the disease dies".

She says that these depictions of TB "fanned fears of transmission and audiences were led to believe TB was a terrible fate that had no hope and if you were noble you would not pose a danger to others, but go away or kill yourself".

The characters suffering from TB in these old films often commit suicide or flee from their loved ones.

Stigma stuck in culture
Many decades later Bollywood seems to have cut down on films about TB, yet the stigma and misinformation around the disease remain.

According to the World Health Organisation, India accounts for 17% of the global population but carries 26% of the global burden of TB. The stigma associated with the disease is a major barrier to the government's extensive TB control programme.

"In India, patients with TB often experience rejection and social isolation because of the lack of knowledge about the disease," says Sarabjit Chadha, project director at the Indian branch of the global organisation International Union Against Tuberculosis and Lung Disease.

"The main reasons for the discrimination is the unfounded belief that TB is incurable, hereditary and spreads through handshaking and sharing food and clothes."

These beliefs often deter people from getting tested or "cause patients to keep their condition a secret for fear of being shunned, even by their own family members", he says.

Two months ago 32-year-old Abdool Rasa, a cook living in a Chennai slum, developed a cough and began sweating excessively at night. After a few weeks he could no longer work in the smoky kitchen environment and was diagnosed with TB.

"I don't tell people I have TB," he says. "If they know they will stand apart from me. They're afraid to even associate with me."

He says he is lucky that his wife and children support him; it is in his family that he finds "comfort".

"Before I started treatment I couldn't even walk a few steps," he says. "But one month later I feel like I'm getting my health back. There are people in my community who don't know TB is curable. They lack that information, which is why they hold on to those old beliefs."

Chadha says that many men lose their jobs because of the stigma associated with the disease and unmarried women, even those cured of TB, "often find it difficult to find life partners and are rejected".

"Married women are often abused by their in-laws and deserted by their husbands," he says.

Mr Sputum saves the day
In an effort to create much-needed awareness about TB, as well as change the perceptions which have been entrenched in the history of Indian cinema and society, a TB fighting superhero was created –Bulgam Bhai.

"Normally TB is associated with distress and despair and the awareness adverts on TV were very depressing," says Chadha. "So we [the international union] created something unique: this character Bulgam Bhai, which is roughly translated into English as ‘Mr Sputum', to associate humour with TB."

Bulgam Bhai is a large potbellied character with a curling moustache and matching curly eyebrows, who, in a slapstick comedic way, appears next to all kinds of different coughing people – from housewives and vegetable vendors to sculptors and people queuing to buy movie tickets.

Chadha says the objective of the campaign, which has reached over 600-million people through TV, radio and print adverts since the beginning of 2012, is to promote sputum testing.

Bulgam Bhai asks those he meets if they have been coughing for two weeks or more, which is when they should get tested for TB.

"He became very popular in India," adds Chadha. "It was so impressive that the Dominican Republic actually copied this campaign and created a similar character."

According to Chadha, preliminary findings of an impact evaluation study conducted by the union revealed that the project "resulted in a significant change in the awareness levels of the community about TB".

The Bulgam Bhai campaign also won a bronze at the country's annual media awards, the Emvies, in 2012.

The romantic drama film Aah, released in 1953, shows a young man, played by Raj Kapoor, falling in love with a woman. When he is diagnosed with tuberculosis he pretends not to love her and tries to find her a better husband.

• In Meghe Dhaka Tara, a 1960 drama film, the heroine, played by Suprya Choudhury, suffers from tuberculosis as she tries to support her family. The disease kills her by the end of the movie.

• Professor is a 1962 box office hit starring Shammi Kapoor. He plays Pritnam, who is a young unemployed man desperately looking for work to pay for his mother's tuberculosis treatment.

• The 1971 action comedy Amar Akbar Anthony features actress Nirupa Roy, who plays the mother of the three heroes, struggling in poverty while her husband is in jail. She contracts tuberculosis and tries to commit suicide to protect her family.

• The 2013 period drama Lootera is set in the 1950s and tells the story of a young woman suffering from tuberculosis and a broken heart. She stares at an almost barren tree and waits for the last leaf to fall, as she believes that is when she will finally be killed by the disease. 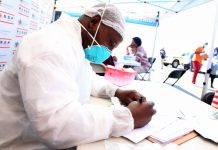 Old lessons, new pandemic: ‘We showed up to do COVID-19 testing & communities told us to pack our bags’