Beep, beep, b-b-beep, beep! Ntombi Mlangeni* takes her cellphone out of her pocket and switches the off button for the daily alarm without even glancing down. She is so used to the sound that she almost automatically makes her way to her bedroom because it's nine o' clock – time to take her HIV medication.

She arranges the colourful pills in a neat row to make sure she remembers to take all three. She swallows the blue pill, called Tenofovir, first, with a gulp of water and winces as she feels the large tablet move slowly down her throat. After a few seconds she tackles Efavirenz, an orange tablet, and finally drinks water with the last, white antiretroviral capsule, Lamivudine.

She pauses in thought for a moment, thankful that she no longer has to take the four other  pills for tuberculosis, which she was suffering from until a few months ago, before she joins her children in front of the television in her Soweto home.

Mlangeni is eager to swap these three "thick" pills for the new all-in-one option that became available in the public sector in April, but at the time only for new patients and pregnant and breast-feeding women.

The new fixed-dose combination (FDC) pill contains three of the most widely used HIV drugs: Tenofovir, Efavirenz and Emtricitabine (which can sometimes be substituted for Lamivudine, the ARV that is part of Mlangeni's regimen). Experts say that this will significantly improve patients' ability to take their medication correctly because one pill is so much easier to take than three.

In October, the health department decided there was sufficient stock to extend the FDC roll-out to all eligible patients. However, some doctors specialising in HIV and activists have criticised the department for failing to keep clinicians updated on the way the FDC should be implemented, causing widespread confusion about when they needed to start prescribing the new tablet for all their HIV patients who qualify to be switched to the three-in-one pill.  Some doctors say large FDC stocks had arrived at hospital pharmacies without them knowing about it.

"All the criteria [that only pregnant women and new patients should get the medication] were dropped in October, when the department decided all eligible patients should be switched to the FDC, and I, along with almost everyone I have spoken to, was not told," said Francois Venter from the University of the Witwatersrand's Reproductive Health and HIV Institute, who consults at the Charlotte Maxeke Hospital in Johannesburg.

Ebrahim Veraiwa, an HIV doctor in Tshepong Hospital in Klerksdorp in the North West Province, said: "We were not officially told, nor was there any notice that I had seen, but patients are being swapped to the FDC in the province."

According to health activists, only doctors in the Western and Eastern Cape were officially told that they had to switch their patients to the FDC pill and, as a result, there have been delays in other provinces.

According to health department statistics, slightly more than 900 000 of the estimated 2.4-million patients on treatment had been switched to the FDC by the end of November.

A survey by pressure group the Stop Stock Outs Project, which was released in November, found one out of five public health facilities that provide ARVs ran out of stock in September and October. It is hoped that the FDC pill will be easier to distribute and store as well as cut down on drug shortages.

Mlangeni is anticipating her next doctor's appointment where she will find out whether she will be switched to the FDC – patients with kidney problems or those who have become resistant to the three ARVs it contains can't take it.

"I heard about the FDC on the news last year already and I would like it to be rolled out to everybody," she says. "I would love to take it and hope I qualify."

Two years into the government's National Strategic Plan on HIV, tuberculosis and sexually transmitted infections and the 2016 target for placing 80% of patients who need it on HIV treatment has been met, but experts warn that there are still serious problems to address.

According to Marcus Low, head of policy at the Treatment Action Campaign, Health Minister Aaron Motsoaledi and his team "deserve credit" for meeting the plan's target.

"However, we need to start looking beyond just the absolute treatment numbers to how those patients are actually doing. Many people who start treatment drop out – we don't really know exactly how many patients are defaulting on their treatment in South Africa, but the little available evidence suggests that it is a very serious problem."

Mark Heywood, head of advocacy group Section27, said that one of the "biggest problems" with the plan is that there is no "robust and independent monitoring and evaluation framework".

"It's been two years since this plan was launched and we still have no credible monitoring system, which means that in reality we don't actually know what's going on. The South African National Aids Council [Sanac] needs to sort this out." Sanac is tasked with monitoring the strategic plan.

During an interview, Sanac head Fareed Abdullah was unable to provide HIV testing figures to reflect the progress made towards meeting the plan's targets.

Abdullah said there has been a 40% decrease in new HIV infections, according to a United Nations report, which is close to the target of 50%. But Heywood said the figure doesn't "sound right".

"We need to seriously interrogate how that was extrapolated; the figure is likely significantly lower," he said. "I'm unsure as to why Sanac is quoting UN figures – it needs to have its own figures available."

Low said that nationwide drug shortages, reported in November by pressure group the Stop Stock Outs Project, are a "very serious weakness in our treatment programme".

Another concern to experts is that close to 14% of women in the age group 15 to 24 are living with HIV, compared with the much lower figure of 3.9% for men of the same age.

"We are very concerned about the high rate of new infections in young women," said Abdullah. 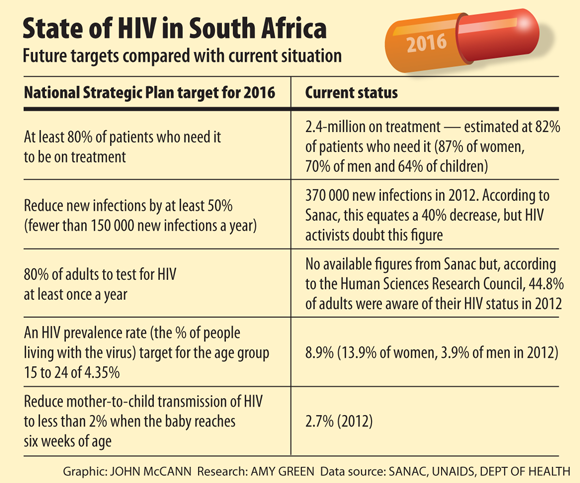