The Free State health department is no longer considered fit to manage its own budget. Financial management authority has been transferred to the provincial treasury, according to a written response from the chief director of provincial budget analysis in the national treasury, Edgar Sishi, to the Budget Expenditure Monitoring Forum, a group of civil society organisations that monitors the health department’s implementation of its policies.

According to the forum, the provincial health department is on the verge of collapse and has racked up R700-million in debt, dating back to the department’s financial crisis in 2008-2009.

Sishi confirmed that the head of the provincial treasury, Godfrey Mahlatsi, “has been given full accounting officer powers over the [provincial] health department”. His main brief is to “deal with the nonpayment of critical medicines and medical suppliers in the province” and “poor procurement of goods and services so that we cut out any waste and inefficiency; and ensure that there is enough money in the bank to pay for future supplies”.

Sishi said the “main problem is that there appears to have been very poor management of the medical supplies in the past and … things like invoices were not being properly managed”. He emphasised that, “once we’re out of the woods, there will be investigations or assessments to uncover what happened, who was responsible”.

Health Minister Aaron Motsoaledi this week also intervened in the province’s department by sending in a national health department team to assist to “rearrange and realign up to R40-million of the provincial department’s budget” to ensure payments to drug companies and fix and maintain boilers and other equipment at hospitals. The national team will take over the purchasing and maintenance of certain medicines and equipment for the province.

“We are extremely concerned about the state of the Free State health department and realise our involvement will have to be ongoing. Our task team’s assessment this week showed that the [provincial] depot has dangerously low levels of stock. Therefore something had to be done,” Motsoaledi’s spokesperson Joe Maila told the Mail & Guardian this week.

In June an investigation by social justice organisation Section27 and the Treatment Action Campaign (TAC) found that the Free State health system was “collapsing with stockouts of more than 200 essential drugs and supplies at the provincial depot, desperate health workers begging for help and stockouts of supplies needed for critical medical investigations such as electrocardiographies.” (ECGs monitor heart activity).

According to Maila, the national health department is now “directly following up with unpaid suppliers to make sure that they get paid and supply the needed drugs”.

He said the national department’s most urgent intervention is to ensure that each provincial hospital has a working boiler to heat water and sterilise equipment. “We found that each of the 27 [health] institutions had some level of dysfunctionality that creates a situation where things aren’t running as they should.”

A team from the national health department will spend the next six weeks further evaluating the health system in terms of “other essential equipment in the Free State”.

“We know the auditor general has been extremely critical of the supply-chain controls over the procurement of goods and services [in the Free State],” forum co-ordinator Thokozile Madonko told the M&G.

According to Madonko, it is “clear that the [provincial] budget has not been developed in a manner that speaks to implementing the right to health in the province, but rather in line with a broader strategy to contain spending at the expense of a key social service such as health. We therefore see tradeoffs being made between infrastructure maintenance, central hospitals and HIV and tuberculosis expenditure.”

Maila said the national health department is confident that this week’s “rearranging and realignment of the provincial budget” will enable the Free State health department to pay its bills. “I’m not going to comment on the R700-million deficit, but … if the need is there, we will further intervene with financial assistance.”

Last week the M&G revealed how patients using free public healthcare in the province were being deprived of access to HIV medication, doctors and basic services such as water to wash after giving birth.

The Free State health department has not publicly responded to the crisis or to any of the repeated requests from the M&G for answers. Said Section27 head Mark Heywood: “The department seems to be denying that there is a severe collapse in part of the health system. It has not reassured the 2.5-million people in the Free State who depend on public healthcare that it has a plan to fix those services, which is in itself hugely problematic because all these people are left uncertain and in some cases afraid.”

The M&G also reported on how MEC Benny Malakoane allegedly ordered doctors at Dihlabeng Hospital to set up an intensive care unit (ICU) bed for an ANC cadre who, according to national protocols, did not qualify for a bed in the ICU.

Meanwhile, other patients were turned away and at least one of them died. The patient who received an ICU bed had been a secretary of an ANC branch in the region and according to doctors his prognosis was too poor to benefit from a bed in the unit.

Activist organisations, including Section27 and the TAC, have repeatedly called for Malakoane’s resignation, but Motsoaledi declined to comment on “matters relating to the MEC”. Maila said: “The MEC reports to the premier, not to the minister.”

Neither Free State premier Ace Magashule nor Malakoane have publicly responded to the allegations at Dihlabeng Hospital, but Heywood has told the M&G a witch-hunt has been launched to “track down the source[s] of the M&G’s story and that Malakoane now argues that, because he is a qualified medical doctor, he had the authority to overrule the clinical managers’ decisions”.

“This is utter nonsense because these specialists work with established ethics and protocols. You can’t, as an MEC on the basis at best of limited partial information from a distance of 250km, make an informed instruction that contradicts the decision of medical staff at the hospital.”

‘We buy food for patients from our own pockets’
“If they find out I’m speaking to you, I’ll lose my job,” says Thabang Molemela*, a paramedic at a hospital in Bethlehem in the Free State.

“They’ll fire and threaten me,” he says over the phone. “But I had to speak to you. Last week I saw all those things about the crisis of the health department in the news. I work in that crisis.
“In December I had a patient dying in my arms because we didn’t have oxygen in my ambulance. We requested a backup from advanced paramedics.

They also didn’t have oxygen. They tell us there are no funds.”
Molemela says he has had to buy his own stethoscope (R120), blood pressure monitor (R480) and blood glucose monitor (R200) when he started to work for the Free State health department five years ago.

“It’s not only equipment; we even bought food for the hospital patients last month. We each gave R10 so the patients could have something to eat. The nurses came to collect the money. When we get paid this month on the 15th, I think they will ask us to help again.”

Molemela has not been paid for working overtime since July last year and has not received his night-time work allowances.
Emergency health workers are not the only ones not getting paid.
On Wednesday, Selina Hlabahlaba led an all-night sit-in of about 100 community health workers and patients at Bophelo House in Bloemfontein (the seat of the Free State health department). They braved temperatures of -6°C.

“We want to show the MEC [Benny Malakoane] how serious we are. We are not going to just leave without any explanations. We need our jobs back.”

Malakoane sent out a memorandum in April terminating all community health workers’ contracts, declaring them “ghost workers”. This is the second sit-in the group is staging after the MEC ignored their protest on June 27.

Community health workers earn a stipend of R1?400 a month.
But instead of Malakoane coming to address the workers, police were sent to arrest them.

According to Free State Treatment Action Campaign spokesperson Sello Mokhalipi, police at the scene told him “they got the order from Malakoane and the head of the Free State health department to come and arrest us”.

“We are very disappointed in government. It’s like they’re saying if they want to save money they can kick us on the street. It’s like all the work we’ve done is for nothing,” says Hlabahlaba.

At 5pm on Thursday evening, after print deadline, Mondli Mvambi spokesperson for the Free State health department responded in writing to Bhekisisa:

“We have acknowledged our financial constraints and the new financial allocations should enable us to get out equipment functioning optimally. We are delighted the Provincial Treasury is assisting us to buy the necessary equipment.”

On allegations raised against the MEC for health, Benny Malakoane:

“There is no truth in the allegations made by Mail & Guardian in what was purely emotionally charged and biased reporting. The only witch-hint is what is being embarked upon by Mail & Guardian which seeks to do anything to dent the image of the department.” 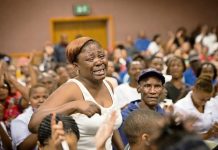