Some 130 community health workers, who were charged with participating in a prohibited gathering in July, have rejected an arbitration offer from the state, which would have seen the charges dropped in the Bloemfontein magistrate’s court on Monday.

“We met with the National Prosecuting Authority, which offered to drop the charges if we admit guilt. We drew up a list of conditions that had to be met for us to accept their offer but they rejected it,” said Anele Yawa, the national chairperson of the HIV lobby group Treatment Action Campaign (TAC).

The
health workers were arrested after they staged a night vigil on July 9 outside Bophelo House, the head office of the Free State’s health department, in protest against what they describe as their “unfair dismissal”.

They effectively lost their jobs in April when the provincial health department ended the contracts of the non-profit organisations that employed them, in what it claimed was a clean-out of “ghost workers”.

Willing to accept guilt
According to John Stevens from the social justice organisation Section27, the health workers had been willing to accept guilt on condition that the MEC agreed to meet them within 10 days; the commissioner of police apologised for the violent manner in which workers were arrested; and that their protest would be acknowledged as being justified considering their circumstances.

Another condition of the arbitration offer was that the health workers would not participate in future gatherings similar to the one they were arrested for.

“We have tried to meet with the MEC for many months to settle the matter and he ignores us. If we cannot hold these night vigils how can we hold him accountable?” Yawa said. “That would be suppressing our freedom.”

“Our question is, who prohibited this gathering? We are not pleading guilty because we strongly believe our actions were justified. If the South African Constitution says people have freedom of expression, how can this be illegal?” he said. “We will go to the Constitutional Court if need be.”

After the court appearance, health workers and activists marched to the Bloemfontein police station to lay a complaint against Malakoane, and other senior officials in the provincial health department, for his alleged involvement in the preferential treatment of an ANC official at Dihlabeng hospital in July as reported by the Mail & Guardian.

“We repeat our call to Premier Ace Magashule to dismiss MEC Malakoane and to appoint an appropriately qualified and committed person in his place,” TAC said in a statement on Monday.

The health workers’ case has been postponed to October 2. 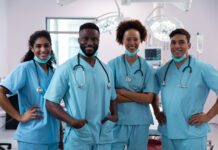 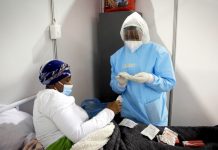