‘When I woke up I saw bits of hair blowing in the breeze from the window above my bed. As I sat up I saw more hair on my pillowcase.”

Resting her elbows on the table in the boardroom of the health organisation Soul City Institute’s office in Johannesburg, where she is today the chief executive officer, Lebo Ramafoko recalls the day she first experienced alopecia, an autoimmune condition that causes hair loss.

Ramafoko was 18 years old and a first-year student at the University of Zululand when this happened.

“I got up from the bed and went to look at myself in the mirror and there were bald spots on my head where my hair used to be. It would just fall out. Whenever I ran my fingers through my hair I would end up with hands full of hair.

“I was terrified. I had no idea what was happening to me. I had never had problems with my hair before. “

Over the next few days, she continued to lose more hair. “I was so ashamed. I wore hats to cover the hair loss. At that age you are already so unsure of yourself that this just compounded my insecurities.”

That weekend Ramafoko flew home to Johannesburg where her parents took her to a doctor who gave her a shampoo as part of the treatment for her condition. But this did not stop her hair from falling out. Soon Ramafoko had lost all of her hair – even her eyebrows and lashes.

After a few weeks, she reluctantly went back to university to prepare for her final exams.

“Going back to school was tough. Although I can honestly not remember being ill-treated or people being rude to me; but I do remember how ashamed I felt.”

Ramafoko put on the Afro wig her mother had bought her and made the trip back to Durban to finish her first year of study. “Back in the 1980s those wigs were ugly and I’m sure people could see that something was wrong,” she says. “It was a very tough time. And back then we knew nothing about alopecia.”

Hair loss
Suretha Kannenberg, a dermatologist at Stellenbosch University, says alopecia means hair loss but the condition has a variety of causes, one of which, as Ramafoko would later realise, “may be familial when it is inherited on a genetic basis”.

“When alopecia develops due to advanced age, the condition is referred to as senescent alopecia. Patterned hair loss, for example male- or female-pattern hair loss, is hormonal and sometimes has a genetic component as well,” she explains. “Alopecia may [also] develop as a consequence of a severe bacterial or fungal scalp infection.”

Alopeca areata, Kannenberg says, is a special form of alopecia in which your own immune system starts attacking your hair follicles, which was the case with Ramafoko.

“Sometimes hair loss may follow a very traumatic event, illness or pregnancy. Medication [such as chemotherapy] may also give rise to alopecia,” says Kannenberg. “Traction alopecia is something that we see often in South Africa when ethnic hair is exposed to all the damaging long-term styling procedures to straighten the hair [such as chemical relaxers].”

Treatment
Although alopecia “may be curable, depending on the cause”, the familial form of the condition, which is what Ramafoko has, is not curable.

Treatment of alopecia depends on what caused it. “In male- and female-pattern phair loss one can apply minoxidil 5% to stimulate hair growth and take in specific hormonal medication to halt the progression of the condition.

“Underlying scalp infections are treated and causative medications are stopped. A topical cortisone product – or something similar – is harnessed for the treatment of alopecia areata, but sometimes this condition requires much more aggressive treatment,” says Kannenberg.

In alopecia areata, other autoimmune conditions such as vitiligo and autoimmune thyroid conditions are also possible – Ramafoko has hyperthyroidism.

“Alopecia areata is more common in females due to the increased prevalence of autoimmune conditions in females,” says Kannenberg.

It is for this reason, Kannenberg says, that “traumatic alopecia is more common in individuals with ethnic hair”. The condition is also more common in women because of styles that pull hair back tightly such as braids and ponytails.

According to a 2014 University of Cape Town study, traction alopecia “affects up to 32% of women and 22% of high school girls with Afro-textured hair but can start in the preschool years”.

“In traction alopecia, atraumatic hair procedures and natural hairstyles are recommended,” says Kannenberg. “Unfortunately, by the time we see these patients with traction alopecia, most of the damage is done and there is no chance of regrowth.”

Concept of beauty
Ramafoko says losing her hair made her realise how much emphasis society puts on women’s appearances. “I don’t know why we feel like we need to buy hair to feel beautiful.”

The insecurity of losing her hair was a struggle that Ramafoko had to deal with over the years. Although she worked hard to “conquer” her condition, she says it was always there, like a dark cloud hanging over her head.

The feelings of shame and insecurity she had suppressed over the years came flooding back more than a decade ago when her daughter was 10 years old. “I still remember that day; it was December 29 2001 – she was swimming at a friend’s house. When she got out of the pool I saw a small patch of hair in the water and it was like I could die.”

Although her daughter was blissfully unaware of what was happening, Ramafoko’s world was spinning out of control. “When she was born, the first thing I did was check that she had 10 fingers and 10 toes – that she was normal.”

Ramafoko thought she had left the alopecia behind her. The patch of hair she had seen in the swimming pool was an ominous sign. The 43-year-old mother of two was flooded with feelings of guilt and blamed herself for passing the condition on to her daughter.

“We had never talked about alopecia before because as far as I was concerned I had left that behind me.” That evening her daughter went to the movies with her friends as planned. “But I couldn’t even go to the cinema. It was like all of the things that I hadn’t dealt with all those years ago were now coming back to haunt me,” she says.

Before her daughter was diagnosed with alopecia, Ramafoko used to wear wigs on a daily basis.

Acceptance
But her daughter’s attitude to alopecia gave Ramafoko the strength to deal with her own issues. “She is a very strong girl and I tried my best to emphasise to her how beautiful she is with or without hair.”

Although she is in a much better frame of mind, Ramafoko says she still struggles with her condition and is yet to conquer alopecia.

But watching her daughter face the same condition has given Ramafoko the courage she needs to speak publicly and raise awareness about the condition.

She recalls the first time she didn’t wear a wig in public; it was her daughter’s first day at a new school.

“That morning I got dressed and, as usual, the wig is the last thing I put on. And as I was putting it on I said to myself, ‘Wait a minute, what kind of example am I setting to my child?’ So to support her I decided not to wear the wig, because she had to face the world without the cover of a wig.

“After dropping her off at school I had an interview on a talk show and that was the first time that I spoke openly about my illness.” 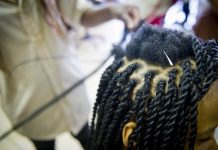