Today, on World Aids Day, I find myself thinking, as I often do on this day, of two remarkable men, both of whom died unnecessarily of Aids-related illnesses: Reuben Mokae and Sonwabo Qathula.

Like the hundreds of thousands of men who die of Aids each year in Africa, Reuben and Sonwabo’s lives and early deaths remind us of the urgent need to address an enduring blind spot in our collective response to HIV and Aids – our failure to adequately reach men with gender equality education and life-saving HIV services, especially testing and treatment.

Remarkable for the lives they lived, their deaths conform to a now predictable pattern: nearly two-thirds of Aids mortality globally is among men. Not enough is being done to address this. Our failure to act on the evidence before us is not only bad for men, but it’s also bad for women and it severely undermines our ability to reach the ambitious goals set by activists to end Aids by 2030.

Reuben Mokae was part of a remarkable group of Johannesburg-based men involved in the now defunct Men as Partners Network, a coalition of grassroots organisations that educated men about the impact of gender inequalities and supported them in taking action to prevent gender-based violence and HIV and Aids.

The father of 3 young boys, the son of a priest, and active in the anti-apartheid struggle, Reuben was invited to join the Men as Partners Network through the HIV support group he and his wife attended after both tested HIV positive in 1998.

I remember being inspired by Reuben as he conducted workshops with men across Soweto, encouraging them to understand the impact of domestic violence and rape, use condoms, get tested for HIV and access treatment. At community meetings, Reuben spoke often, and always with enormous pain, about his own use of violence against his wife and how deeply he regretted it. He urged men in hall after hall across Johannesburg to question definitions of manhood that equated being a man with asserting dominance over women, pursuing multiple sexual partners and being reluctant to use health services.

Reuben bravely used his own life story to help men understand the devastating effects these gender stereotypes have on women – and on men like himself. He always talked proudly about how he had rejected gender stereotypes in caring for his wife as she struggled with Aids-related opportunistic infections and finally died in 2003 at a time when anti-retroviral treatment was still not easily available in South Africa.

Tragically, Reuben was seduced by the Aids denialism that characterised the South African government’s response to Aids at that time and stopped taking his medication after he heard the minister of health describe ARTs as toxic. His health slowly deteriorated until he died in June 2005. I still remember the anguish and confusion on the faces of his young sons at his funeral. Their father need not have died.

Like so many men from South Africa’s rural Eastern Cape province, Sonwabo Qathula left home as a young adult to work on the mines in Johannesburg where he eventually contracted HIV. Fortunately, when he returned home sick, he became active in another initiative like the Men as Partners Network that Reuben had been active in. The One Man Can Campaign mobilised men in rural villages across the Eastern Cape province to respond to the twin and interlinked epidemics of gender-based violence and HIV and Aids ravaging those communities. Concerned about children orphaned by Aids, Sonwabo established a community garden and started an after school feeding scheme through which he promoted gender equality and educated community members about HIV prevention. A wonderful picture of him remains imprinted in my memory. He’s standing, preparing food for children in a frilly, floral cooking apron as though deliberately defying the gender stereotypes deeply embedded in his rural community. 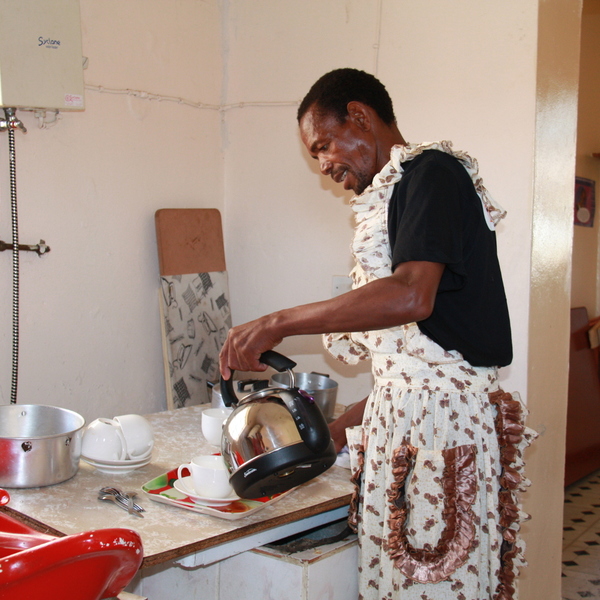 During that time, Sonwabo also began attending a support group for people living with HIV. He even produced a short film chronicling his experiences as a man living with HIV. But as remains typical of such groups and the treatment adherence groups that have they have often evolved into, the group had no other men. Sonwabo found it lonely there and struggled to find people who could relate to his struggles of living openly as a man with HIV in a society that still stigmatised men who sought health services as weak.

We were shocked to hear of Sonwabo’s death in 2011. Tragically, like Reuben, he had also stopped taking his treatment. We later learned that he stopped attending the support group regularly and began to default on treatment, ultimately succumbing to Aids-related illnesses Reuben and Sonwabo’s lives convey a simple truth: it is possible to get men to recognise the harm rigid gender norms cause to both women and men, and it is necessary to then support them in taking action to promote equality and address HIV and Aids. Indeed, many evaluations have shown that programmes like the Men as Partners Network, One Man Can, and many others can reduce men’s violence against women, increase their support for gender equality and improve their use of condoms and other HIV prevention strategies. Tragically, very few of those programmes are currently being implemented. To stop Aids, we will have to recommit to rolling such programmes out across Africa.

Reuben and Sonwabo need not have died. However, like far too many men, they fell through the gaps of an HIV and Aids response that is oriented primarily towards reaching women during their reproductive years and doesn’t do a very good job of engaging men. While HIV prevalence is more or less equal between women and men, men constitute almost 60% of Aids-related deaths globally, and make up the majority of Aids-related deaths in every region of the world. In most of Africa men make up only about a third of those getting tested and treated, but nearly two-thirds of those who die of Aids. Not only do we have a responsibility to address this, we won’t succeed in our efforts to stop Aids if we don’t.

When we fail to develop policies and programmes that increase men’s access to and use of HIV services, the outcomes are predictable. Men get sick and die unnecessarily. Quite evidently, this is bad for men. But it is also bad for their sexual partners, their families, their communities, and the health systems that serve them. When men do not know their HIV status, they are  less likely to use condoms, and are thus much more likely to transmit HIV to their partners. They are also less likely to access treatment and decrease their viral load, which we now know makes it extremely difficult to transmit the virus. Not being on treatment also guarantees that people living with HIV will sooner or later need care and support – initially at home where the burden of care is almost always borne by women, and then later by public health officials who attend to men with low CD4 counts who require expensive treatment to restore their health.

Our failure to adequately engage men with health services drastically reduces the effectiveness of the many impressive, new HIV prevention breakthroughs which could break the back of the epidemic if adopted widely. Without a doubt, the success of approaches like treatment as prevention, or pre-exposure prophylaxis, will be dramatically undermined if we don’t do a better job of reaching men and supporting them to access and stay in HIV care.

Over the last decade a growing number of studies have raised the alarm about men’s low involvement in HIV services and urged action on two fronts: challenging the norms about manhood that encourage men to view health seeking behaviours as a sign of weakness, and developing improved health system policies, programmes and service delivery strategies to ensure better provision of HIV services to men.

Next week UNAIDS and Sonke Gender Justice will convene a high level meeting on men, gender and HIV in Geneva. It will bring together experts to advise the UN and its member states on how to roll out campaigns that engage men to transform harmful gender norms and promote gender equality, and it will propose strategies to improve men’s access to HIV services. We will attempt to honour the memories of Reuben Mokae and Sonwabo Qathulo, two men who bravely advocated for gender equality but did not receive the health services they needed to outlast HIV.