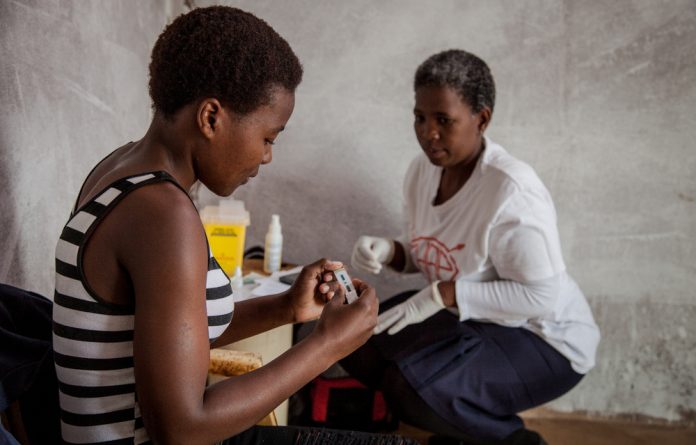 Care workers may be the backbone of community health care but they sure aren’t paid like it.

This week, a panel of experts released its recommendations for a proposed minimum wage of R3 500 per month. In its report, the panel noted that care workers were by far the most likely to earn significantly below this threshold with wages so low that workers were in effect “subsidising the cost of these services through low-wage or no-wage work”.

This is hardly news to many of the country’s community health workers who continue to battle for regularised pay and benefits.

Gauteng community health workers recently marched to the department of health. The march was prompted by, in part, the department’s decision this year to summarily change the conditions of employment. These workers, who were paid directly by the department until March 2016, have been forced into contracts with Smart Purse, an outsourced payment management system. Essentially outsourced workers, they are not eligible for benefits such as paid maternity leave, state-subsidised pension payments and a myriad of other benefits afforded to government employees.

The department gave workers an ultimatum: accept the new conditions or face dismissal.

For some, this is only the latest protest in a struggle for decent pay and working conditions that has dragged on for years.

As with other community health workers around the country, the grievances of those in Gauteng are manifold. They do not have the basic tools with which to do their jobs, including the masks and gloves meant to protect them from contracting germs such as the bacterium which causes tuberculosis when treating patients. Workers receive erratic monthly stipends and these vary widely depending on where they work in the province. Monthly stipends that are as low as R1 800 barely cover transport costs — let alone feed their families. If they are injured at work, they are not covered by the occupational health and safety act and so are not compensated.

The vulnerability of workers like these did not escape the expert panel that this week presented a proposed minimum wage to the country’s National Economic Development and Labour Council (Nedlac). In fact, the care work sector was so out of sync with national pay scales “partly as a result of low levels of government subsidy”, the panel recommended a separate expert panel be convened to address poor pay.

Central to these issues may be the national health department’s lack of support for the mainstreaming of these workers into the healthcare system. Workers in many parts of the country continue to be outsourced, paid by the department of health but formerly employed by non-governmental organisations.

In 2011, the South African national department of health listed the employment and training of large numbers of community health workers as one of the key foundations of its health human resources strategy. The department also acknowledged the need to standardise their training and conditions of employment. In the same year, the country launched ward-based community outreach teams.The strategy aimed to ensure that teams of, for example, nurses, health promoters and at least six community health workers were present in each district. The teams have however not been deployed nationally.

Four years later, the country’s human resource strategy has failed to deliver on the uniform, formal and dignified employment conditions it promised for the country’s almost 74 000 community health workers. A national community health worker policy has been in a draft form for more than two years. When Motsoaledi was pressed about its finalisation, he said that he had referred it to provincial health MECs but promised an announcement would happen in September 2016. To date, nothing has been forthcoming.

It is baffling that the national community health worker policy continues to go unimplemented when it outlines so clearly what is required of both the national and provincial departments of health.

The draft national community health worker policy makes specific undertakings in relation to the conditions of employment for both community health workers and home-based carers. The draft policy is clear that whether employed directly by the state or an NGO, workers must be remunerated equally and according to department of labour standards. The document also states that workers should be issued with three-year contracts.

But even the KwaZulu-Natal programme is not without its weakness. Community health workers have complained that although they are the ones interacting with communities and gathering important data on health outcomes, district officials do not treat them as equals and fail to address patient issues.

Community health workers deserve fair and decent working conditions because without them communities suffer. When they are forced to strike for better conditions, people default on medication or die from infections that could have been treated with a proper referral. Community health workers are a vital link between patients and care in our health system. They deserve to be treated as such.

Until a national policy that regulates the conditions of community health worker employment – including remuneration – is finalised and implemented, workers who are the backbone of our health service remain vulnerable and abused.

Ntsiki Mpulo is a writer for public interest law at SECTION27.

Ntsiki Mpulo is a writer for public interest law at SECTION27.