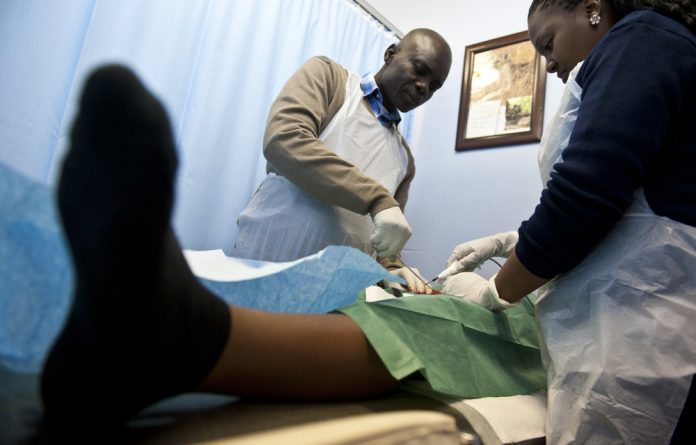 Circumcision can prevent thousands of HIV infections by 2030 at a relatively low cost, but the uptake has been slower than expected.

Arriving at a clinic in Johannesburg in April, Thabo Khoza* (23) was greeted by Nurse Lettie Tshabalala*. He informed her that he had heard about the benefits of voluntary medical male circumcision on the radio and from someone at work. He told the nurse he wanted to get circumcised because it would help him be more hygienic. One of his girlfriends had also insisted that “circumcised men are so much better in bed”.

Tshabalala could see that Khoza was very nervous. She smiled at him, offered him a seat in the waiting area and brought him a glass of water to put him at ease. She explained that he would undergo a physical examination before the circumcision procedure. He would also be counselled and tested for HIV. Although the health department recommends an HIV test, it isn’t mandatory. If Khoza’s physical examination showed that he was in good health, he would therefore still be able to get circumcised without taking a test.

International studies have shown that medical male circumcision – when the foreskin of a man’s penis is removed either surgically or using a World Health Organisation pre-approved non-surgical circumcision device – can reduce the risk of contracting HIV for a heterosexual man by up to 60%.

Khoza glanced at some of the posters on the walls in the waiting area. They gave details on medical male circumcision and offered a 24-hour hotline number in case of an emergency. The men on the posters looked healthy and were smiling. “Perhaps it’s not so bad,” Khoza thought.

On the table in the waiting area, there were containers filled with colourful condoms and pamphlets. Khoza tried to calm his nerves by paging through information booklets on HIV, tuberculosis and other conditions such as diabetes and high blood pressure. But Khoza grew increasingly worried. He was concerned that the operation would be painful. The idea of being tested for HIV, and the possibility of testing positive, also filled him with fear.

Khoza grew up in a rural village in North West province. He moved to Johannesburg last year to take up a job. He frequently travels between his home village and the city and has several concurrent relationships with women in both locations.

To protect himself from contracting sexually transmitted infections such as HIV, Khoza uses condoms – but not all the time. He has often had unprotected sex with at least two of his regular girlfriends. “Skin on skin is the best, after all, isn’t it?” Khoza and his partners have often argued. But he now realised it was possible that he could have contracted HIV, and, even worse, he could have spread it to his girlfriends.

Khoza started to talk to a middle-aged man, almost twice his age, in the waiting area. The man was also there to be circumcised. He told Khoza that male circumcision doesn’t only reduce a man’s risk of contracting HIV. It also helps to prevent certain cancers in men and their female sexual partners.

The man ruefully admitted that he had not been to a healthcare facility in years and that coming in for circumcision gave him an opportunity to speak to a doctor or nurse about his occasional dizziness and night sweats. He told Khoza that high blood pressure runs in his family, and his father passed away a year ago following a stroke. The tragedy encouraged him to overcome his fear of being seen as weak if he sought medical help. That is why he took advantage of the free medical care being offered through South Africa’s national medical male circumcision programme.

Studies have shown that men in South Africa rarely visit clinics for routine medical check-ups. Most only seek help if they are extremely ill. Going for medical male circumcision might be their only interaction with formal healthcare.

As all clients are screened for various diseases and undergo a full physical examination during which their temperature, heart rate, blood pressure, blood sugar and weight are measured, health conditions that would otherwise not be picked up can be diagnosed and treated.

Data from the United States President’s Emergency Plan for Aids Relief – Pepfar – and the District Health Information System suggest that most men undergoing medical circumcision in South Africa voluntarily consent to be counselled and tested for HIV. In 2015, 85% of men being circumcised at Pepfar-supported sites were tested, with 2.3% testing HIV positive, according to Datim, Pepfar’s data collection system.

All men testing HIV-positive were referred for further care and treatment at specialised facilities. If it were not for free circumcision programmes, these men may have never tested for HIV. Khoza’s conversation with the older man made him realise that he too could face his fears and take an HIV test.

South Africa introduced its free medical male circumcision programme in 2010. According to the draft National Strategic Plan on HIV, Sexually Transmitted Infections and Tuberculosis for 2017-2022, 2.3-million men between the ages of 15 and 49 were medically circumcised between 2010 and 2015 – about 55% of the national target of 4.2-million circumcisions by the end of 2016. Although the target will not be reached by the end of this year, medical male circumcision services continue to attract men to healthcare facilities and contribute to HIV prevention in several ways.

Such programmes don’t only offer a medical intervention to reduce men’s chances of contracting HIV – they also reach men with HIV prevention messages and help those who test HIV positive to access specialised care and treatment. Medical male circumcision services play a crucial role in ensuring men access healthcare earlier, and, in the process, are linked to holistic care and treatment for any other medical conditions they may be suffering from.

Back at the clinic, Khoza was relieved to learn that he had tested negative for HIV. The circumcision procedure itself was not as painful as he had imagined. There was no bleeding and his wound was securely bandaged.

After waiting for a short time in a special “post-operative” waiting area, Khoza was told how to care for his wound and given a detailed pamphlet he could take home. Nurse Tshabalala explained it was important to abstain from sex for at least six weeks. Khoza also received dates to return to the clinic for follow-up visits to check on his healing and receive treatment if necessary.

Tshabala invited Khoza to return for free condoms or advice at any time. The counselling he had received helped Khoza to understand the importance of regularly testing for HIV, as well as using condoms every time during sex to protect both himself and his sexual partners from HIV and other diseases.

Mathematical modelling has shown that medical male circumcisions will help to prevent thousands of HIV infections at a relatively low cost when compared to other interventions. It will play a crucial role in achieving the United Nations goal of ending the Aids epidemic by 2030.

Tell us what you think – make a comment and rate our story on a scale of 1 (really bad) to 10 (excellent). We’d love to hear from you

Donna Jacobs works for University Research Co as its chief of party for the United States Agency for International Development Applying Science to Strengthen and Improve Systems (Assist) Project. She is also the Southern African regional director of the Quality & Performance Institute.

“We take the fish out of the water”: Three myths about vasectomies – busted

These gun laws saved 30 lives a month in two big cities. Here’s what it could mean for SA