On Wednesday, heads of states will sign the first UN declaration on the most deadly infectious disease on earth: TB. The ink is mostly dry on the 16-page agreement, but what’s not in the final version — and who is likely to snub its signing — tell their own story.

Wednesday’s high-level meeting is only the fifth time in the UN’s 73-year history that the body has called such a gathering on a health issue. High-level meetings, designed to tackle specific issues of unprecedented importance, have been convened around Ebola, antibiotic resistance, non-communicable diseases and HIV. In 2001, the UN’s historic gathering on HIV was widely credited with creating increased political will to address the pandemic and ushering in an era of regular tracking of countries’ responses.

South Africa, and Health Minister Aaron Motsoaledi, in particular, have played a leading role in the meeting, both in its inception and taking a hard line during heated negotiations on the declaration’s final wording.

The document commits the world to, among other goals, curing 40-million people of TB in the next four years and ensuring that almost an equal number receive the medication — isoniazid — needed to prevent developing active TB. The drug is one of two medicines commonly used to treat TB but it can also help to prevent it.

South Africa saw almost half a million new cases in 2017, according to the World Health Organisation’s latest report.

On Wednesday, President Cyril Ramaphosa and other heads of state will ratify the document, but it’s mostly a formality. UN member states have already agreed to adopt the declaration in principle earlier this month, but not before South Africa spearheaded last-minute protests over a 20 July draft of the statement that failed to incorporate important access to medicine issues.

The two bones of contention: Language that would have affirmed countries’ rights to wave specific patent protection to promote public health as set out by the World Trade Organisation (WTO). And commitments that could help usher in new ways of developing cheaper drugs for the bulk of the world’s TB patients in developing countries.

Watch: Find out what South Africa is doing to find “the missing 30%” when it comes to TB

In the wake of the September 11 terrorist attacks in 2001, strange parcels laced with deadly bacteria began arriving at US office buildings, including those of high-ranking government officials. News reports showed teams in hazmat suits collecting nondescript envelopes from building and quarantining offices. The tiny bugs inside, once inhaled, could give way to an infection known as anthrax that is almost always fatal, the US research organisation Mayo Clinic explains.

Fearing a chemical weapons attack, the US moved to begin stockpiling antibiotics to treat what could become a mass outbreak. The only trouble was that the patented medicine by pharmaceutical company Bayer was too costly for a widescale response.

So the US threatened to use the World Trade Organisation’s 2001 Agreement on Trade-Related Aspects of Intellectual Property Rights (Trips) to issue a compulsory license for the drug. This kind of arrangement would allow other companies to produce Bayer’s product without a patent because of the public health emergency. Trips protects countries’ rights to safeguard access to medicine by challenging conventional patent protection on public health grounds.

Faced with the prospect of a compulsory license, Bayer chose to sell the drug to the US government at discounted rates.

Although the US has dabbled in Trips flexibilities itself, trade officials have had a nasty habit of being less welcoming when others do. Given the history, South African officials may not have been surprised when the  20 July version of the TB declaration made no mention of the tools under Trips at countries’ disposal.

It did, however, contain this line: “[We recognise] that intellectual property rights are an important incentive in the development of new health products.”

International humanitarian organisation Doctors Without Borders (MSF) was quick to point out that the statement is untrue when it comes to epidemics such as TB that are concentrated in developing countries.

While South Africa halted deliberations in protest, MSF’s head of its Access Campaign for affordable medicines shot back.

“For almost two months, negotiators have been in heated talks that resulted in a draft declaration that widely diverged from language in previous UN declarations on health and access to medicines,” Els Torreele said.

“This aggressive push by several countries backed by Big Pharma lobbies would severely undercut needed guarantees to protect access to vital tools and medicines for people living with TB.” 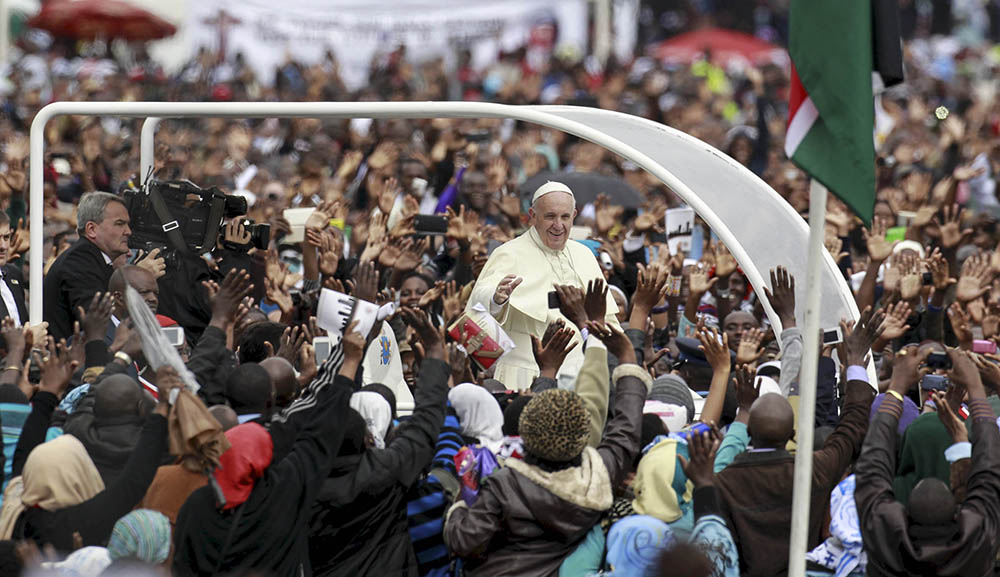 Pope Francis hits the streets of Nairobi. The Vatican took strong positions in the formation of the declaration, advocating for a stronger emphasis on childhood TB.

South Africa’s objections led to what Access Campaign HIV and TB advisor Sharonann Lynch calls a “showdown with the US government” – not just on Trips, but also on the role profits should play in TB research and development. South Africa has found staunch allies in many countries, including the G77 Block of developing nations, which are home to the bulk of the world’s TB patients.

In drug development, money is the kingmaker. When epidemics of illnesses such as cancer or diabetes affect more and more people who can pay, drug developers often follow that, working on new drugs where profits can be assured.

When diseases affect poorer communities or when they are so rare they might only affect one in a million, those markets are likely to be unable to pay much or result in significant market share. This means that drugs for illnesses like TB or the blood infection schistosomiasis — found largely in Africa — are low on the list of research and development (R&D) priorities.

To combat this, activists are increasingly speaking about the need to de-link R&D costs from a drug’s ultimate price. In fact, it was recommended by a group of experts, including South Africa’s national health department director-general Malebona Precious Matsoso, as part of a recent UN panel.

But on Wednesday, heads of state will sign onto a declaration that will not mention the word  “de-linkage” by name but does include many statements espousing the principles that underlie the new R&D model, co-director of TB for the advocacy organisation  Treatment Action Group Mike Frick explains.

“The declaration speaks about promoting TB research and development efforts and ‘aiming’ [that those] be needs-driven and evidence-based,” he says.

“That was watered-down from earlier iterations and suggestions from civil society that would have had stronger language committing states to ensure that all R&D efforts are needs-driven, evidence-based, etc. So we have weaker text in that there is no firm commitment here. There is just a desire to ‘promote’ that.”

The text above Ramaphosa’s signature will make scant mention of Trips but not the tools it offers countries.

“The preamble text is meant to be descriptive. But in the text of the document, there is no corresponding operative paragraph or commitment to be agreed upon and acted upon by [UN] member states,” he says.

“This definitely wouldn’t stop states from making use of Trips flexibilities, but it is just that the political declaration would not be another tool for countries to do so.”

The declaration has also been criticised for being weak on accountability — affirming global targets rather than instituting national ones. Questions are asked about whether that will be enough to help spur the national leadership needed in the TB response.

Meanwhile, activists have confirmed that at least three high-burden countries — Belarus, Brazil and India — are expected to skip the meeting. China’s president Xi Jinping is also likely to miss the event.

“We’re rather disappointed when countries are not sending high-level representation because frankly, that’s what’s been missing in TB. TB for too long has been in the shadows: it suffers from lack of accountability, it is allowed to be treated with mediocrity both in terms of R&D and the political will behind it,” Lynch says.

“Unfortunately we are not going to be able to smash that status quo if it’s all the same people in the room talking to each other. In order to fight TB, you have to show up.”