Our computers and phones keep us connected but a key ingredient in them keeps children as young as six locked in a vicious cycle for about R26 a day.

Until recently, I knew cobalt only as a colour. Falling somewhere between the ocean and the sky, cobalt blue has been prized by artists from the Ming dynasty in China to the masters of French Impressionism. But there is another kind of cobalt, an industrial form that is not cherished for its complexion on a palette, but for its ubiquity across modern life.

This cobalt is found in every lithium-ion rechargeable battery on the planet – from smartphones to tablets to laptops to electric vehicles. It is also used to fashion superalloys to manufacture jet engines, gas turbines and magnetic steel. You cannot send an email, check social media, drive an electric car or fly home for the holidays without using this cobalt. As I learned on a recent research trip to the Democratic Republic of the Congo, this cobalt is not awash in cerulean hues.

Instead, it is smeared in misery and blood. 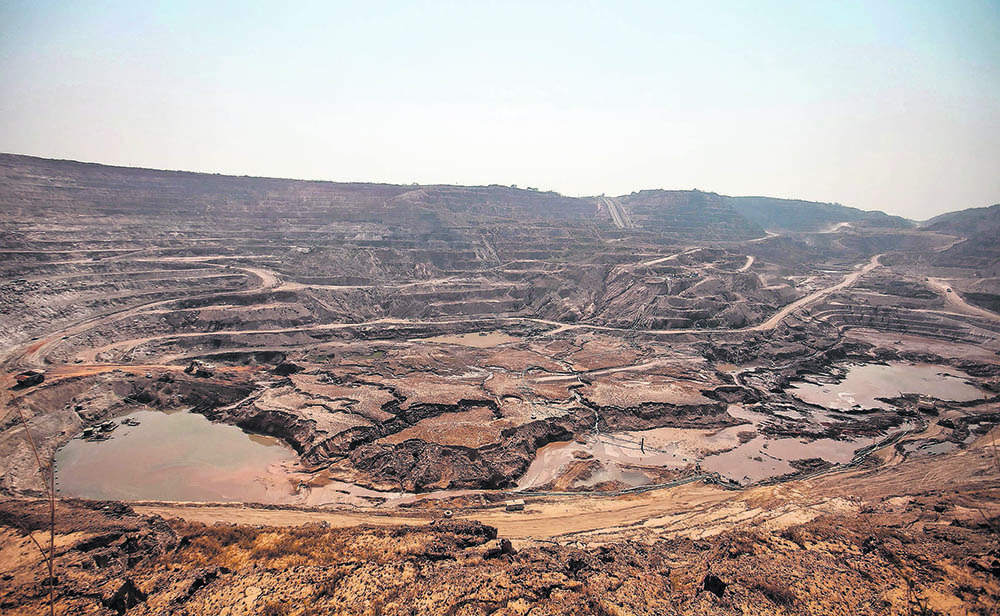 At least 35 000 child cobalt miners could be working in the south-east of the DRC. (Bloomberg)

Elodie is 15. Her two-month-old son is wrapped tightly in a frayed cloth around her back. He inhales potentially lethal mineral dust every time he takes a breath. Toxicity assaults at every turn; earth and water are contaminated with industrial runoff, and the air is brown with noxious haze.

Elodie is on her own here, orphaned by cobalt mines that took both her parents. She spends the entire day bent over, digging with a small shovel to gather enough cobalt-containing heterogenite stone to rinse at nearby Lake Malo to fill one sack. It will take her an entire day to do so, after which Chinese traders will pay her about $0.65 (R9.50). Hopeless though it may be, it is her and her child’s only means of survival.

More than half of the world’s supply of cobalt is mined in the “copper belt” of the south-eastern provinces of DRC, a 2016 report by Amnesty International says.

According to the government agency charged with oversight of the informal or “artisanal” mining sector, at least 20% of this supply is mined by locals like Elodie, called creuseurs, Amnesty says. The remainder is produced by industrial mines that are typically operated by foreign companies following the collapse of the state-owned mining company, Gécamines.

Across the south-eastern provinces, I observed that Chinese companies run many of the industrial mines in the region. The Chinese also appear to run most of the “buying houses” that purchase cobalt from children such as Elodie. Every one of the 23 buying houses I documented in detail were operated by the Chinese, and I must have seen a hundred more with Chinese traders inside.

Chinese processors then mix cobalt from industrial and artisanal sources during a preliminary refining stage to produce crude cobalt hydroxide, which they drive to ports at Dar es Salaam and Durban for export to China.

After additional refining in China, the cobalt is sold to major component manufacturers and consumer electronic companies across the world.

These companies are collectively worth trillions of dollars. Yet according to Amnesty International in a report at the end of 2017, none of them are making sufficient efforts to ensure that their riches are not being built on the backs of the oppressed women, men and children of the Congo who toil in putrid conditions, endure pitiful wages, grave injury and risk death to mine their cobalt.

I documented the horrors at 31 artisanal mining sites in the south-eastern provinces, including several previously undocumented sites in remote mountains near the Zambian border. Based on the data I gathered, I estimate there are more than 255 000 creuseurs mining cobalt in DRC, at least 35 000 of whom are children, some as young as six. 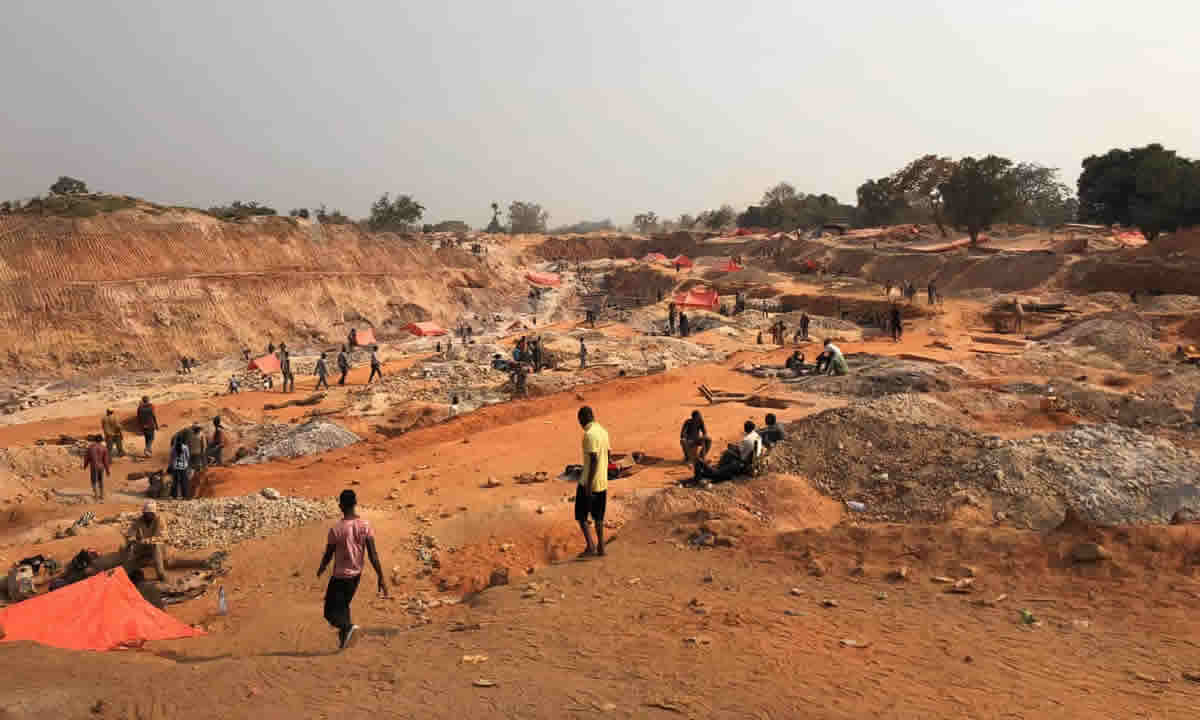 A cobalt mining site near Kasulo in the DRC.  (Siddharth Kara)

While market prices of cobalt have spiked 300% in the past two years, none of that increase makes its way down to creuseurs like Arthur. The 16-year-old boy joined a group of young men who spent two months digging a tunnel 26m straight down before they hit a heterogenite vein. Now they descend into darkness each day, spending up to 24 hours at a time in narrow tunnels unable to stand, hacking away for cobalt. Every minute is suffused with dread, because many tunnels have collapsed in Kasulo, burying alive everyone inside.

At the surface, I follow the men from Arthur’s tunnel with several sacks of cobalt to one of the dozens of Chinese buying houses nearby. The entire neighbourhood has in fact been walled off, in an effort to keep people from documenting the perilous conditions.

The cobalt under Kolwezi is purer than at Elodie’s site, so the traders at the nearby buying house pay a higher rate for each kilogramme. It works out to roughly US$1.80 (R26) a day in income for Arthur, but he is unlikely to get to keep all of it. Numerous local creuseurs told me that children like Arthur are forced to pay bribes to the local government functionaries who are supposed to ensure there are no children working at sites like Kasulo.

In mine after mine, I witnessed heartrending suffering at the bottom of global cobalt supply chains.

The companies that source cobalt from DRC are surely aware of the appalling conditions under which the mineral is mined in some sites in the country. Aside from the Amnesty reports, labour abuses linked to cobalt mining in the region have been widely documented by human rights groups and by media organisations across the world.

Yet while major consumer electronic and automobile brands state they do not tolerate child labour in their supply chains, none have invested enough resources or time into ensuring that they can adequately address the human rights abuses that could be lurking in the products they sell to millions across the world. They have consistently shifted responsibility for human rights abuses in the Congo on to their Chinese suppliers.

In the absence of full accountability, suffering can run riot. No company should be able to jettison their responsibility for the vicious and unjust treatment of the people who mine cobalt and other minerals simply because they are separated from them by a few thousand miles, and a few layers in their supply chains.

From stone to phone, they must be accountable.

Any company sourcing cobalt from DRC must establish an independent, third-party system of verification that all mineral supply chains are cleansed of exploitation, cruelty, slavery, and child labour. They must invest whatever is needed to ensure the decent pay, safe and dignified working conditions, healthcare, education and general wellbeing of the people whose cheap labour they rely on.

There is little we can do as consumers at present, apart from refusing to buy their products until they take sufficient action.

A gust of wind swept across Elodie’s mine, swirling toxic dust over every inch of child and infant. Her son awoke, crying meekly. She wiped the grit from his face and sat in the dirt to feed him.

She asked me what I was going to do when I left her and her baby.

I wanted to tell Elodie I would try to help. I wanted to tell her that despite all the evidence to the contrary, there were people in the world who cared about her and her son.

But I left in silence. I knew these words would be worthless.

Siddharth Kara is an adjunct lecturer at the Harvard Kennedy School of Government and a visiting scientist at the Harvard School of Public Health. This piece was originally published in The Guardian’s Global Development section.