The investigation of an independent panel recommends reviewing whether UNAids executive director Michel Sidibé should continue in his role.

An independent body has found “overwhelming evidence” that organisational culture at the United Nations’s HIV body, UNAids, allowed for abuses of power, bullying and sexual harassment.

“UNAids mirrors the whole UN as a ‘boys club’ with hierarchical and patriarchal culture of discrimination, lack of transparency and accountability that enables harassment,” said one official with ties to senior management at the UN body’s Geneva secretariat.

“The leadership has a rhetoric for a harassment-free zone but do not push for it instead they are aware of sexist and sexualised remarks as if women were sexual objects.”

The official, quoted in a report released Friday, was one of several hundred that participated in a review of the body following years of allegations regarding sexual harassment. In response, the agency convened an independent panel of experts including gender activists to investigate claims. As part of this, the committee interacted with about 60% of UNAids secretariat staff either through in-person interviews, written submissions or via an online survey.

“The UNAids Secretariat is in crisis, a crisis which threatens its vital work”, the panel found.

“The leaders, policies and processes at UNAids have failed to prevent or properly respond to allegations of harassment including sexual harassment, bullying and abuse of power in UNAids.”

The report is especially damaging when it comes to UNAids executive director Michel Sidibé. The panel credits Sidibe with being a passionate and effective advocate for groups, such as young women, who remain at a high risk for HIV infection.

But the committee says that his “personalised, patriarchal management style has, however, come at a significant cost to transparent due process within the UNAids secretariat and enabled a culture of harassment, including sexual harassment, bullying, and abuse of power”.

Sidibé may now be at risk of losing his job if the HIV body implements the panel’s recommendation for a change of leadership. It adds that it has “no confidence that the current leadership can deliver cultural change” when it has been mostly responsible for the current situation.

The release of the report comes less than a day after the organisation issued a statement denying that it had ever offered economic compensation to complainants of sexual harassment in exchange for non-disclosure agreements.

In response to the report, UNAids says it is putting together what it describes as an agenda to transform the organisation into a “model working environment for all staff that ensures safety and inclusivity and upholds the highest standards of accountability and integrity.”

Sidibe, in a 62-page response by management to the panel’s findings, said he is committed to using this as an opportunity to strengthen engagement with staff.

“I know that not all of our staff, in all their diversity, are experiencing the inclusive work culture to which we aspire. And, as UNAids’ most senior leader, I know that I am the most important role model. The ultimate responsibility for creating the culture we want is mine. Model behaviour starts with me”, he wrote.

Public health expert and activist Paula Donovan who cofounded with the organisation Aids-free World with former UN Special Envoy for HIV/Aids in Africa Stephen Lewis. She called on UN General Secretary António Guterres to take action on the report and for increased independent oversight of the UN system as a whole.

“In 30 years, I have never heard of an independent report that delivered such a scathing indictment of internal UN leadership,” she said in a statement.

“Sidibé and the inner circle that has been protecting him can no longer continue to lead UNAids. The report points to one brutally obvious conclusion: Abuse of power reigns when the UN is allowed to police itself.”

Aids-free World previously alleged that UNAids had been suppressing the report, writing in a 3 December statement that an official memorandum circulated to UNAids staff had said all reports regarding the inquiry would be made public on that day. The organisation also undertook an extensive campaign regarding allegations of sexual harassment at the organisation.

Meanwhile, whistleblowers and HIV activists took to Twitter Friday to express their reaction to the report.

Sima Newell, a former director at UNAids, took her story about harassment at the UN body to The Guardian, alleging that the woman at the centre of the claim was promoted within the UN system despite the fact that her claims had not been properly investigated. 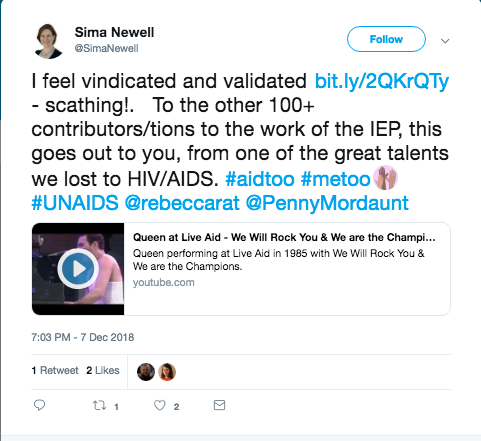 In South Africa, activists tweeted out excerpts of the report and demanded that not only Sidibé resign but that his resignation letter include an apology to longtime HIV activist Vuyiseka Dubula. Tlaleng Mofokeng is the vice-chairperson of the Sexual and Reproductive Justice Coalition. Mofokeng tweeted this shortly after the report was made public.

In May, Dubula joined 22 other women in penning an open letter calling for Sidibé’s removal. In the document, they wrote how a UNAids country director Erasmus Morah had pleaded with Dubula to help protect UN agency head, Health-e News reported. She, in turn, received a letter threatening legal action against her from the country director, who was subsequently placed on special leave in late September.

HIV activist Yvette Raphael took to Twitter to recount how instrumental South African activists had been in voicing their concerns over conduct at UNAids. 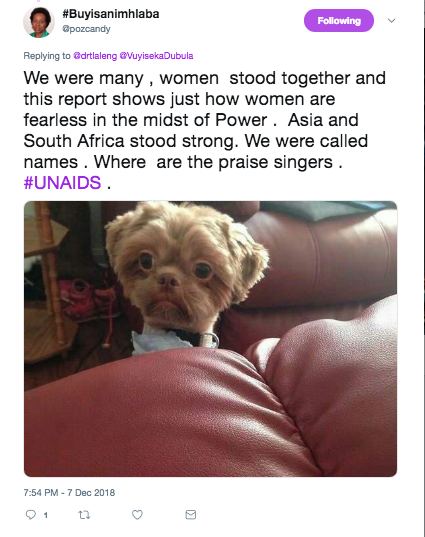 This is an updating story. Read the panel’s full report below:

The 62-page response from UNAids management can be read in full below:

Health Beat | Should future Aids conferences only happen in the Global South? (Episode 1)