Arriving in the village of Kivalo in south-west Madagascar after a boat ride of about three-quarters of an hour through beautiful mangrove from the nearest land point, is a bit like stepping out of time. Children frolic in the water. Palm trees sway in the ocean breeze. Chickens run between thatched huts as fishing nets hang by the beach, ready for the next outing. It feels like very little has ever changed here.

Yet this tranquillity belies the enormity of the change ahead. Few countries are more vulnerable to climate change than Madagascar, the location of which – in the Indian Ocean, off the south-east coast of Africa – leaves it hugely exposed. The island nation’s pervasive poverty and lack of economic development also severely restrict its capacity to adapt to climatic shifts.

Broadly speaking, the main changes experienced by Madagascar will be rising temperatures, extended drought periods, as seen in the south, greater variability in rainfall, the intensification of cyclones – cyclone Enawo, in 2017, was the most destructive in 13 years – and rising sea levels and sea temperatures.

In Kivalo, much of this is already familiar. “The southern wind used to start in January and last until June or July,” says Bikison Thomas, a local fisherman. “But it’s still going now [ in November].”

On very windy days, fishermen cannot go out to sea. “There is also more fog, which makes it difficult to leave early in the morning,”says Thomas. 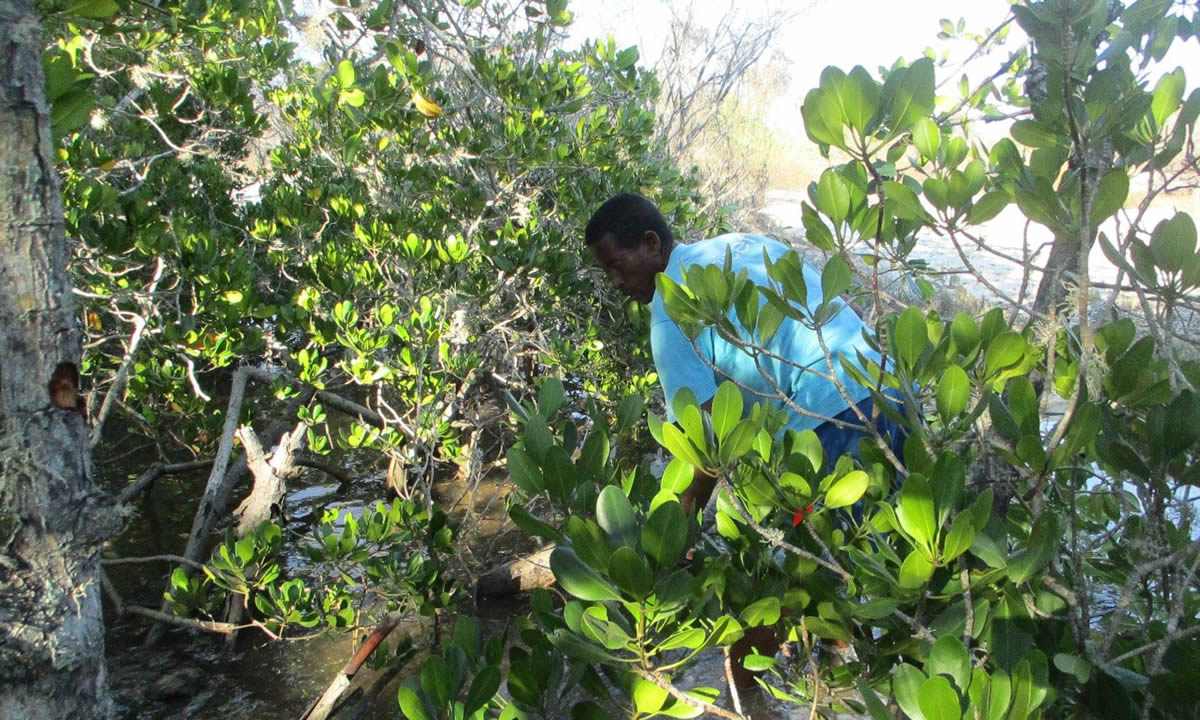 Mangrove restoration work in Kivalo, sponsored by WWF, has so far restored about 10 hectares of the shrub. (Courtesy Kivalo)

Other factors are also contributing to reduced catches, not least overfishing and the loss of mangrove, a crucial habitat for the regeneration of fish stocks.

Further down the coast, in the city of Morondava, hotels and restaurants in the seaside neighbourhood of Nosy Kely are grappling with another effect of climate change: sea-level rise. Two years ago, Chayune Badouraly bought a hotel there, the Coco Beach: it had a few bungalows and a lovely beach. Badouraly then built a new building with bedrooms, a reception and a restaurant. But in September, during the powerful equinox tides, the sea destroyed two of his five bungalows. The water level has not returned to its original level since.

“We used to have 150m of beach, now it’s minus five,” he says, bitterly. “I knew we had coastal erosion problems, but I didn’t think it would be that bad. I would never have bought.”

The government of Madagascar is well aware of the country’s vulnerability. It has ratified the Paris climate agreement and climate change is listed in every major policy document. Budget allocations usually fall short, however, says Jane Razanamiharisoa, director of adaptation at the National Bureau for the Coordination of Climate Change. “As part of the consultation for the national adaptation plan, we have lobbied about the importance of getting the ministry of planning and budget involved, so that decision-makers can factor climate change in the budget,” says Razanamiharisoa.

The government is also piloting adaptation projects in key sectors, but Razanamiharisoa believes that, for Madagascar to boost its resilience, climate change must become embedded in policy “in every sector, and at every level: national, regional and local”.

Although there are plans to build sea defences in Morondava, Badouraly says it could take months, even years for anything to materialise. Since September, the sea now laps right up against the new buildings, so he’s taken the problem into his own hands by building a 60-metre long sea defence wall from stone blocks, steel rods and sand bags. “Everything we earn goes there,” says Reza Vally, Coco Beach’s manager. 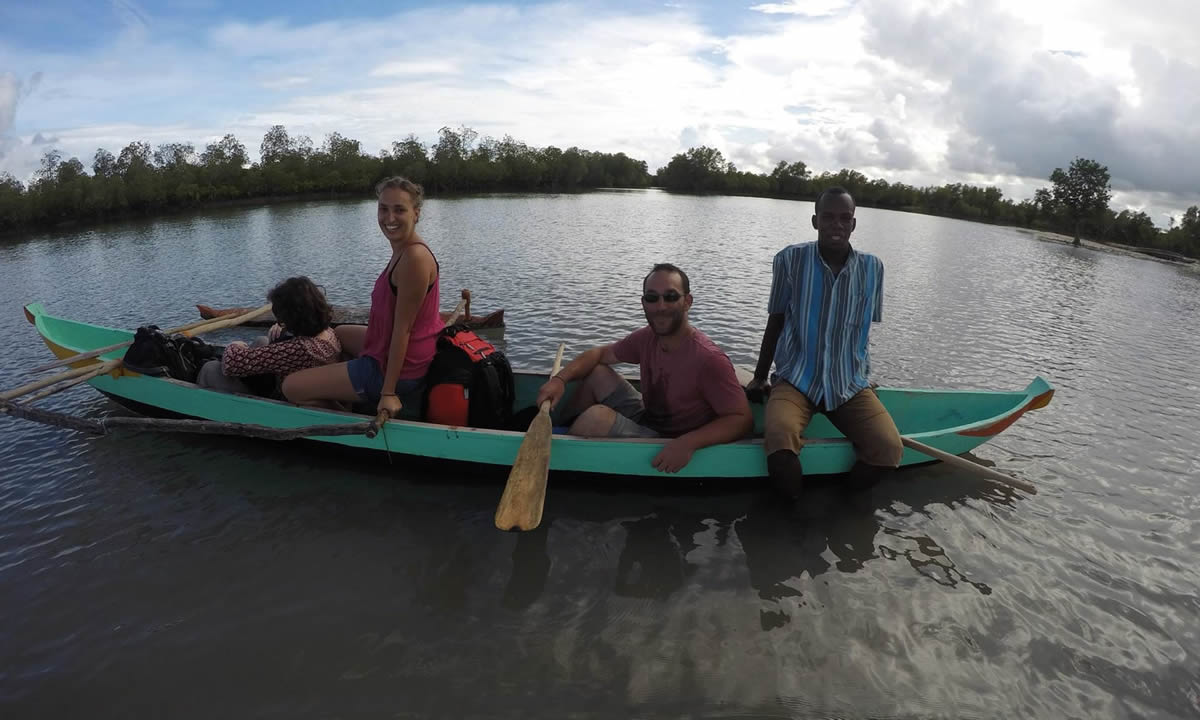 Ecotourists enjoy an outing in a pirogue in Kivalo, Madagascar. (Courtesy Kivalo)

In Kivalo, WWF is piloting the development of beekeeping and ecotourism. The initiatives offer alternative revenues to fishing and protect the mangrove by making it the cornerstone of the new activities. The organisation estimates that 80% of mangrove destruction in the area is due to human factors, and 20% to climate change; rising sea level and less rainfall means increased salinity levels and more silting in mangrove areas.

“There is nothing we can do about [climate change factors], but we can work on the human factors,” says Eli Todimanana, capacity building offer at WWF Madagascar.

Despite the new activities being far removed from anything they had ever done, the villagers have embraced the opportunity. The village now has 12 hives, kept in a secure enclosure, and they have had two honey harvests over the past year.

Since different species of mangrove trees flower at different times of the year, Todimanana says they could have up to four harvests a year once they master the art of beekeeping. “Can you imagine? Fishermen converted to beekeepers, that’s quite something,” he says. “They have tough lives: they leave at 4am to fish, come back by midday; then they must look after their nets. It’s quite hard to fit in other activities.”

The village has also started receiving tourists, making the best of its postcard location. There are pirogue tours, crab-fishing excursions in the mangrove and meals cooked by local women. WWF has provided training and technical support throughout.

Justin Rakotomanahira, a local fisherman and president of Kivalo’s village association, says the new activities have been like a window to the world: “It’s allowed us to meet new people and learn new skills, which we’ll be able to pass on to our children. Fishing is our life but, given the current pressures, this move [to other activities] is really important.”