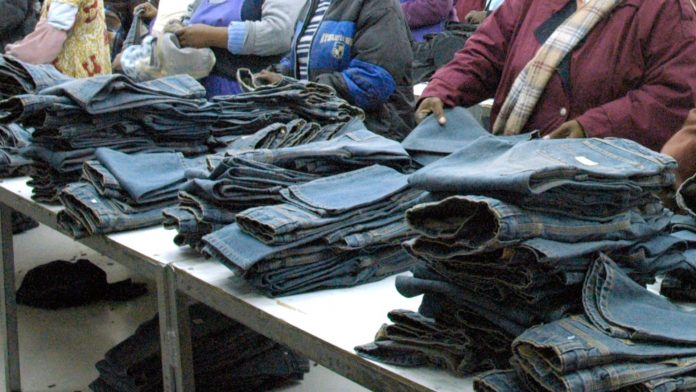 Women at factories in Lesotho owned by Taiwanese firm say jobs and promotions in jeopardy if they refuse advances, claims report

Women producing jeans for American brands including Levi Strauss, Wrangler and Lee have been forced to have sex with their managers to keep their jobs or gain promotion, an investigation into sexual harassment and coercion at garment factories in Lesotho has found.

Brands have responded to the “extensive” allegations by the US-based Worker Rights Consortium (WRC) by signing enforceable agreements with labour and women’s rights groups to eliminate gender-based violence for more than 10,000 workers at five factories owned by the Taiwanese company Nien Hsing, one of the southern African country’s largest employers.

A two-year investigation by WRC into Nien Hsing operations, published on Thursday, found that managers and supervisors regularly coerced female workers into sexual relationships by promising promotions or full-time contracts. The investigation also found that management failed to take disciplinary action against offenders and that workers’ right to unionise was suppressed, preventing them from collectively raising their concerns, the Guardian reports.

The abuses violated workers’ rights under Lesotho’s labour laws, international standards and the codes of conduct of the brands sourcing from the factories.

Sexual harassment from managers and supervisors was so pervasive that male co-workers also routinely engaged in abusive behaviour, according to off-site interviews with 140 workers in various operations at three Nien Hsing factories, where women engaged in sewing, quality control, cutting, washing and packing.

“All of the women in my department have slept with the supervisor,” one worker told the labour rights group. “For the women, this is about survival and nothing else … If you say no, you won’t get the job, or your contract won’t get renewed.”

Another claimed no action was taken against her supervisor despite a complaint to personnel about inappropriate touching: “They said they would fix it. No action was taken. Then I just let it go because they didn’t do anything about it.”

The report includes allegations against managers from overseas. One worker claimed that “foreign national managers slap women’s buttocks and touch their breasts”, adding: “One time, we caught [an expatriate] manager having sex with a female … worker in the factory. The women in these relationships get promoted easily and get a lot of bonuses.”

WRC also alleges that supervisors who were found to have engaged in sexual harassment, bribery or other forms of misconduct were usually transferred between departments, rather than being disciplined.

Notably, the abuses were not detected by the factories’ voluntary codes of conduct or monitoring programmes, as managers put pressure on employees “to lie” to auditors, the report claims.

“We are demanded to lie on behalf of the company,” one worker was quoted as saying.

“The people that buy the product of the company were on site, and we were threatened that if [anyone told] the truth of what really happens, it might jeopardise their jobs.”

Levi Strauss & Co’s vice president of sustainability Michael Kobori told the Guardian that the company has been sourcing from the Lesotho facilities for the past 10 years, and that as soon as they received WRC’s findings: “We required Nien Hsing to immediately take a series of actions to address the allegations, including making changes in staffing and management at the facilities named in the report”.

Flawed systems: Internal complaint processes ask employees to trust the management at the root of the problem to fix it

Rather than suggest the brands terminate their contracts with Nien Hsing, WRC asked them to use their business relationship to leverage the supplier to change its practices, said WRC senior programme director Rola Abimourched.

“Internal ‘complaints procedures’ ask workers to trust the very management responsible for the abuses and ignore the power imbalance between workers and their supervisors, who may be perpetrators of abuse,” explained Abimourched.

“Despite the existence of social auditing programs that aim to address gender-based violence, workers at the bottom of supply chains remain vulnerable to abuse. These binding agreements present a fundamentally different approach, one with teeth.”

The agreements include the creation of an independent oversight body with the power to investigate claims of sexual harassment and expose abusive managers. The body also has the power to compel the factories to discipline offenders, including sacking where warranted.

Chairman Richard Chen of Nien Hsing, which also operates in Mexico, Taiwan and Vietnam, said the agreements would “benefit and protect people, and women in particular”, adding: “We strive to ensure a safe and secure workplace for all workers in our factories and are therefore fully committed to implementing this agreement immediately, comprehensively, and with measurable success.”

In a joint statement, Levi Strauss & Co and Kontoor Brands said: “We are committed to working to protect workers’ rights and foster wellbeing at third-party supplier factories, so that all workers at these facilities, especially female workers, feel safe, valued and empowered.

“We believe this multifaceted program can create lasting change and better working environments at these factories, making a significant positive impact on the entire workforce.”

Lesotho is a growing player in the global textile and apparel industry, producing 26m pairs of jeans annually and employing about 38 000 people. Roughly 85% of all exports go to the US, where buyers include Gap, Reebok, Ralph Lauren, Walmart and Calvin Klein Jeanswear, according to official figures.

Abimourched said the factory agreements are likely to have an impact beyond the workplace.

“We expect that this will have a tremendous impact on the lives of women workers who will no longer fear going to work,” she said.

“We also expect that, because of the size of this employer and [because] leading women’s rights organisations were involved in the design of the programme, the success of the programme could impact the garment sector, as well as society in Lesotho.”

Kontoor, which sources from contract suppliers in up to 20 different countries, plans to “learn from this pilot project [in Lesotho] to implement changes in other [supply chain] facilities around the world”, said Deitz.

This piece was originally published as part of The Guardian’s Global Development project.

How long will you wait for a COVID vaccination appointment? We answer 7 EVDS questions