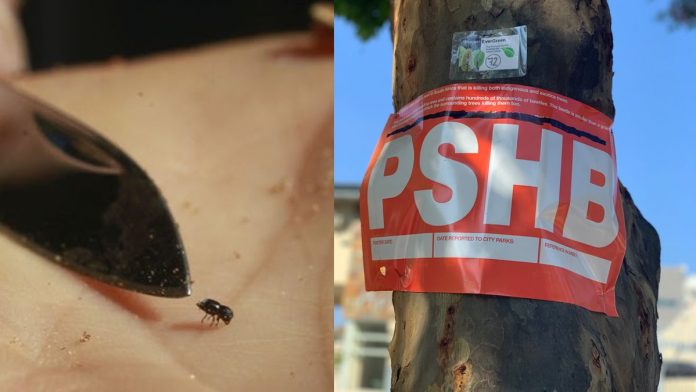 Joburg may have avoided a total “treepocolypse”, but the city is continuing to battle the invasive beetle killing off its trees. In the war against the shot hole borer, there may be more at stake than just the city’s iconic tree-lined avenues.

In Joburg, there was never any gold to be had without the trees.

If left to its own devices, Johannesburg would have been a swath of rolling grasslands. But the mines demanded more so some of the first trees planted in the 1800s in the city were for lumber, ferried deep beneath the earth and used to prop up mine shafts.

In part to feed the city’s quest for ore, plantations of trees such as Blue Gums, Oaks and Wattles were planted in neighbourhoods we now know as Laanglaagte, Craighall and Parktown as the mines sought the best bones for their tunnels, Johannesburg City Parks says. Soon, trees dotted gardens and the town square.

By the dawn of democracy, City Parks estimates, 10-million trees had been planted in the city’s boundaries.

Johannesburg’s trees have stood witness to our history, from the town’s early mining days to the quest for freedom under apartheid’s repressive regime. But they haven’t been just bystanders to our past, they shape our city — and our health even today.

And that’s under threat today because of one unwelcomed and tiny visitor.

In 2017, the polyphagous shot hole borer beetle was reportedly discovered in Pietermaritzburg Botanical Gardens. It recently made its debut in Johannesburg sparking initial reports that infested trees would have to be cut down and headlines that screamed of an impending “treepocalypse”.

Today, bright red signs with the initials “PSHB” have sprung up on trees all over the city. If you think the problem is all about aesthetics, think again.

In sprawling urban cities, we are more reliant on trees than we’d like to think. They help us feel better mentally and ward off the rise of phenomena that’s come to be known as urban heat islands.

Since 2013, there’s been a flood of research looking at how what scientists broadly call nature-based solutions — think planting trees or sowing rooftop or vertical gardens — could affect people’s health.

In 2017, scientists sought to make sense of it all and reviewed 13 of the strongest studies examining links between urban nature and — for instance — obesity, physical activity and emotional wellbeing.

The relationship between nature, obesity and physical activity were weak or inconsistent, the study published in the journal Environmental Research showed. But two large reviews found that exposure to these kinds of nature-based solutions was strongly shown to reduce anger and sadness. A year later, another study in International Journal of Environmental Research and Public Health echoed this, revealing that, for example, city dwellers who walked in urban nature preserves had better attention and ability to reflect on their problems than their peers who ambled through cityscapes.

Green spaces have also been shown to benefit children’s mental health, particularly focus and memory, a 2018 review published in the International Journal of Environmental Research and Public Health showed.

Research like this is one reason that guaranteeing everyone has access to green spaces in our rapidly urbanising world has become an international development target.

In South Africa, scientists have also found that communities living near green spaces report fewer new cases of depression than those who don’t. But this relationship doesn’t hold true for people living in urban informal settlements. There, access to green spaces was likely not enough to outweigh the health impacts of social and economic struggles associated with poverty, the 2017 research published in the journal, The Lancet Planetary Health, showed.

And, as Joburg’s heatwave continues, trees also have a knack for keeping us cool — which, for particularly the old and young who are more susceptible to heatstroke and dehydration, can be a matter of life or death.

As the world heats up due to the climate crisis, so too do our cities, creating what’s come to be known as urban heat islands. The concept, first studied in the 1880s, describes how our cities get hotter as natural vegetation is stripped away to make room for heat-absorbing asphalt roads and concrete buildings.

The normal daytime temperature of asphalt can be up to 20 degrees hotter than that of grass, according to a 2012 study carried out in Japan.

In 2015, University of Johannesburg researchers mapped just how hot Joburg was and where it was the hottest. The city’s northern suburbs had the highest temperatures. Conversely, neighbourhoods by bodies of water or with high levels of vegetation were the coolest, showed the work, which was peer-reviewed and presented at the 2015 International Symposium on Remote Sensing of the Environment.

They noted that although the city had millions of trees, these were not equally distributed and that places with fewer trees were indeed hotter even in the dead of night.

Then, these same researchers modelled what Joburg’s heat map would look like over time between 2017 and 2050:

How to keep cool in a boiling city?

But planting trees in combination with other greening strategies, such as rooftop gardens and green walls, can help cool these heat islands, reducing some of the risks of exposure to heat exhaustion and heatstroke, a 2016 study published in Landscape and Urban Planning found.

But science also says that we need more research to figure out which trees are better at helping cool cities and adapting to our changing climate.

Today, there may be a glimmer of hope for the city’s battle against the shot hole borer bug.

“The good news is that many trees have shown signs of recovery with sprouting buds and leaves,” said the City Parks department on its website. “Hundreds of infected trees have been saved, but City Parks continues to encourage the planting of indigenous and more resilient trees to restore the city’s ‘green canopy.’”

Joburgers should know the signs of an infestation — bore marks, fine sawdust and blotches of tree sap — and report affected trees. With braai season just around the corner, even using infected trees for firewood risks spreading the disease.

Saving our trees is more than a vanity project. If we do not, we stand the chance of losing the trees that have been the foundation of our city but also help sustain us.

Garret Barnwell is a clinical psychologist and PhD candidate at Nelson Mandela University and a Bongani Mayosi Medical Research Council Scholar. He has a special interest in planetary health, focusing on the psychological experiences of environmental degradation and climate change. Follow him on Twitter @BarnwellGarret.