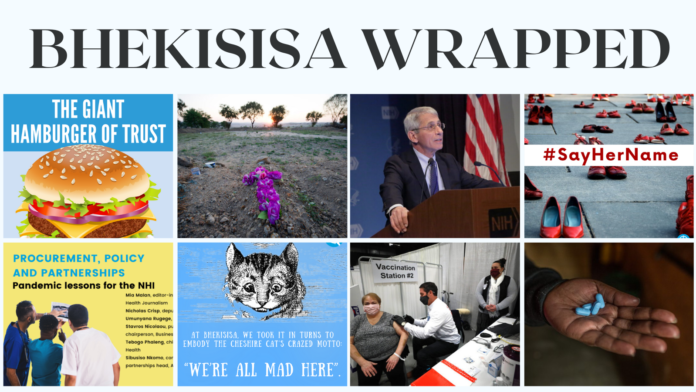 Crash landing into a pandemic as health journalists was already a rollercoaster last year. But little did we know the new twists and turns that 2021 would bring.

From new variants to vaccines to COVAX, unproven treatments and intellectual property rights and travel bans, we’ve had to keep up with it all. And it keeps on changing — one week you think you’ve cracked it, the next week it’s all different.

But that’s pandemics — things move at twice the speed of normal life.

One of the ironic gifts of pandemics is partnerships; without them you simply don’t get things done fast enough. And for Bhekisisa, the pandemic partnerships we’ve formed with journalism organisations such as Media Hack and Eh!woza as well as several radio and television stations, are incredibly valuable, especially because they will continue to exist long after COVID.

We’ve worked like maniacs this year, and we’re so grateful and humbled that some of our work has been rewarded. In November our team’s COVID-19 coverage was acknowledged with the 2021 Reconciliation Award of the Institute for Justice and Reconciliation. We’re so incredibly honoured to be mentioned among the likes of Albie Sachs, Tim Modise, Mary Burton, Sibongile Khumalo and the Socio-Economics Rights Institute, who are all previous winners of this award.

And in August, the Charlotte Mannya-Maxeke Institute awarded our Mia Malan their Public Health Award for making public health information accessible via her Twitter, webinars and media interviews during the pandemic. To end the year off, we asked each member to share the story they’re the most proud of — and it’s not all COVID.

We often write about gender-based violence at Bhekisisa, and about the projects that are trying to address it. But this opinion piece by researcher Lisa Vetten captures the contradictions and complexities of preventing violence against women and children in an almost poetic way.

The article also offers a pragmatic way to think about the hotly disputed data the police collect on violence against women. It’s not perfect, but it’s not useless either.

Nonetheless, rape cannot be prevented without taking into consideration the specific circumstances (such as poverty and hunger) that shape people’s daily experiences.

All together, this piece distills years of expertise and doubles as a handy reporting guide for journalists working to contextualise gender-based violence in South Africa.

I loved our Sputnik Series from August. I think it’s the perfect example of the type of work Bhekisisa does, which is to make complicated science easy to understand.

The four-part explainer uses a hamburger analogy to explain how scientific knowledge is produced. Each ingredient of the burger represents a different part of the process, including data, study design, peer review and regulation.

The information that’s out there about the Sputnik V COVID vaccine doesn’t make for an appetising meal at all.

In the final instalment, Aisha Abdool Karim and Joan van Dyk break down why each ingredient has to be fresh to ensure people trust medicines such as vaccines.

My favourite article from this year is “Four lessons from 40 years of HIV: Why COVID doesn’t end with equitable vaccine access”.

As someone who has lost family to both Aids and COVID-19, the parallels between the two pandemics have been uncanny.

The four lessons outlined by Lynne Mofenson in this piece not only highlights the cycle of inequality between Africa and the rest of the world, but also how inaction prolongs pandemics.

As Mofenson wrote, then and now, “lives that could have been saved, [were] lost”. Hopefully, the scientific strides made in this pandemic, can prevent us from repeating history in another 40 years.

Every so often, a woman is murdered by her partner and it enrages the South African public.

But many victims of femicide don’t capture much attention, and many are not even reported on in the media.

This data project, called “Say Her Name“, in partnership with Media Hack, found that only a fraction of femicide victims make it into the media.

Here, you can read about the real women behind the statistics.

A pill, a ring or a jab: The future of HIV prevention is choice

This year started on a good note for Bhekisisa. We were asked to be the official media partner for the International Aids Society’s annual HIV Prevention conference.

There’s one article from that conference that I’ve gone back to many times this year, months after the conference was over: “A pill, a ring or a jab: The future of HIV prevention is choice”.

The piece dives into the many emerging biomedical methods you can use to protect yourself from becoming infected with HIV. We, of course, now have to make sure we deliver them in ways that work for people.

This article helped me to answer many questions my friends had about HIV prevention.

Anthony Fauci, US President Joe Biden’s chief medical advisor, became a household name during COVID. When he granted Bhekisisa a Zoom interview in August, we were over the moon — and, well, intimidated.

When we asked him if life will ever return to normal again, he responded: “I believe it will … but I hope the normal will be a better normal than we started out with — being better prepared for the next pandemic.”

That’s also how we felt after our interview with him: a little better prepared for the next one.

‘We’re all mad here’: Gaze through the looking glass a year after SA’s first COVID case

My favourite story of the year is ‘We’re all mad here’: Gaze through the looking glass a year after SA’s first COVID case.

Although it deals with a serious topic that has taken a toll on everyone everywhere, Joan and Aisha tell us about having to learn about COVID and report on it at the same time.

The piece is written in a fun, quirky and honest way, chronicling a year of COVID and taking the reader through the first infection in SA, lockdown and the arrival of COVID vaccines.

A roller-coaster ride that was engaging to read from beginning to end.

I’ve always found Bhekisisa’s webinars to be incredibly informative. This one from July helped me to get a better understanding of an important social justice issue – universal access to healthcare.

The panellists were balanced, and spoke about South Africa’s proposed National Health Insurance scheme in a way that was clear and easy to understand.

COVID still dominates headlines, in the health world at least, but that doesn’t mean crucial developments in other sectors of health reporting should be left behind.

Lastly, an honourable mention from Mia

In April, South Africa lost one of its most-loved HIV doctors to COVID, Sindisiwe van Zyl. Sindi was also a dear friend of mine. I met her in 2010 at a media function where her playfulness and sincerity stuck with me.

She taught me an important lesson: if you want to be a successful lecturer or mentor, you need to treat your students or mentees as equals; not as subjects you’re expecting to be grateful for the imparting of your knowledge.

I’ve carried that lesson in my heart ever since — because that’s how Sindi treated her patients and close to 300 000 Twitter followers: as equals. Over the years, Sindi worked closely with Bhekisisa on several projects.

This was our goodbye to her.

If you’re wondering which of our articles got the most clicks this year, here’s a list of the top five.

Want to continue supporting our work so we can produce even more great content in the new year? Consider donating below.