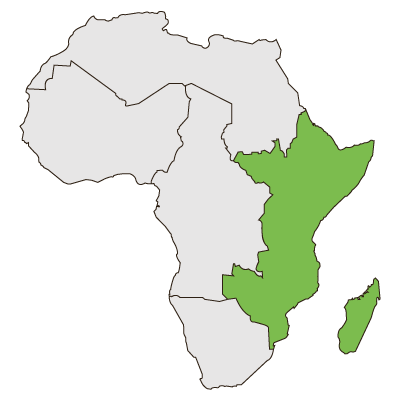 Main health concerns
According to the United Nations Children’s Fund, HIV and tuberculosis in East Africa are relatively controlled because of wide scale treatment, particularly in Kenya and Tanzania where prevalence rates are as high as 6% and 5% respectively. But these diseases remain a challenge for the healthcare system because treatment needs to be provided to large numbers of people.

East Africa forms part of the meningitis belt where the disease — a highly contagious inflammation of the membranes covering the brain and spinal cord — is endemic. The meningitis belt stretches over 26 countries from Senegal in West Africa to Ethiopia in East Africa. In parts of East Africa, including Kenya, Somalia and Tanzania, cholera, an infectious disease that causes severe watery diarrhoea, is also endemic.

According to the African Economic Outlook, East Africa has the highest projected population growth in Sub-Saharan Africa. Environmental changes related to the increased use of land to grow crops as a result of a fast growing population have resulted in higher temperatures. In turn, this has created a breeding environment for mosquitoes that spread mosquito borne diseases such as malaria and yellow fever. While mosquito borne diseases are decreasing in the region because of effective interventions, they remain a concern in Kenya, Ethiopia and Uganda.

Other insect borne diseases that occur in the region include sleeping sickness (African trypanosomiasis), dengue fever (a viral disease borne by mosquitoes resulting in fever) and bilharzia (a disease caused by parasites that can result in urinary tract or intestinal infections).

Our Stories from East Africa

The joke’s on us, South Africa. The cruel logic of Omicron...

[WATCH] Getting COVID: Is it safe to go to the movies...

How Africa plans to make 60% of the vaccines needed on...