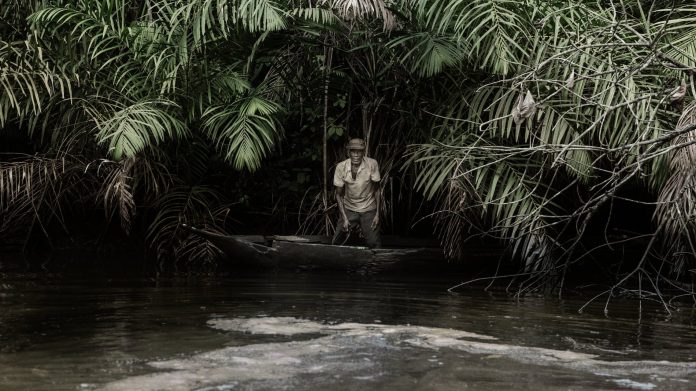 Meandering rivers and lush forests offered rich pickings for generations of farming and fishing communities. Then came the oil companies.

Almost every day, Udengs Eradiri is informed of another oil spill in Bayelsa state in southern Nigeria, in the Niger Delta. Most of the time, little or nothing is done to clean up the mess, says Eradiri, the state’s commissioner for the environment.

“You just need to take a tour to understand the magnitude of the environmental abuse,” he adds. “[Bayelsa] used to be green, you could go to farm or fish. We used to have very impressive harvests. You would spend just an hour in the water and you have a lot of fish.”

Today, he added, you can spend the whole day without catching anything.

Oil was first pumped in Bayelsa in 1956 by Shell. Since then, several international oil companies have extracted oil from across the Niger Delta.

In Bayelsa and elsewhere, communities have faced an environmental catastrophe. About 40-million litres of oil are spilled every year across the Niger Delta, according to the Rise for Bayelsa campaign.

Air, land and water have all been contaminated, with studies reporting devastating effects on residents’ health and livelihoods. Vast areas of the state’s waterways and mangrove swamps – one of the most diverse ecosystems in Africa – have been destroyed or put at risk.

Farmland has been cloaked in oil, contaminating crops and exposing people to high levels of heavy metals such as chromium, lead and mercury.

Meanwhile, gas flares – where natural gas associated with petroleum extraction is burned off in the atmosphere – have filled the air with pollutants, and created acid rain.

Of Bayelsa’s estimated population of two-million people, three-quarters rely on fishing or farming to support themselves.

“Those communities are getting involved in other ways of surviving. And that’s why there’s been a lot of upsurge in criminal activities as well as artisan refining, all to survive.”

Shell, one of the international oil companies operating in Bayelsa, says that oil spills due to crude oil theft, illegal refining and sabotage cause the most environmental damage in the Niger Delta.

“Our aim is to run a responsible business, which means operating safely without harm to people and protecting the local environment. In Nigeria, we operate to the same standards as other Shell-operated ventures globally. No spill is acceptable, and we work hard to prevent them,” Shell Petroleum Development Company of Nigeria said in a statement.

“We work closely with the regulators, local communities and other stakeholders to address this challenging issue and, irrespective of cause, we clean up and remediate areas affected by spills from our facilities or pipeline network,” the statement added.

It said that in the case of operational spills, compensation is paid to people and communities impacted.

The company says its efforts to clean up areas have at times been hampered by instability, as its employees are unable to safely access affected areas.

“If you want to resolve the issues in the Niger Delta, if you want to totally eradicate the compromise on infrastructure, you must involve communities in the contractual agreement,” says Eradiri. “That means it is not just owned by other people with other interests.”

The effect of the oil industry on people’s health in Bayelsa is still emerging. “Life expectancy is cut short – as low as 45. We used to have a very old population but, right now, that’s not as visible as it used to be,” says Eradiri.

“You see premature babies, you see all kinds of funny illnesses, cancer, that [are] not normal for young people.”

A recent study estimated that, in 2012 alone, 16,000 babies died within the first month of life because of oil pollution in the Niger Delta.

Separate research, cited by the interim report of the Bayelsa State Oil and Environmental Commission, has found that pollution is placing communities at heightened risk of kidney damage, as well as diseases such as cancer, diabetes, Alzheimer’s and Parkinson’s. Campaigners report increased cases of diarrhoea and child malnutrition.

The commission’s interim report concluded that communities suffered life-changing health consequences as a result of oil pollution. The report added that they have also found it almost impossible to secure fair redress.

“There is no concerted effort by [international oil companies] to ensure that a proper cleanup is done,” added Eradiri. “The law is not being adhered to.”