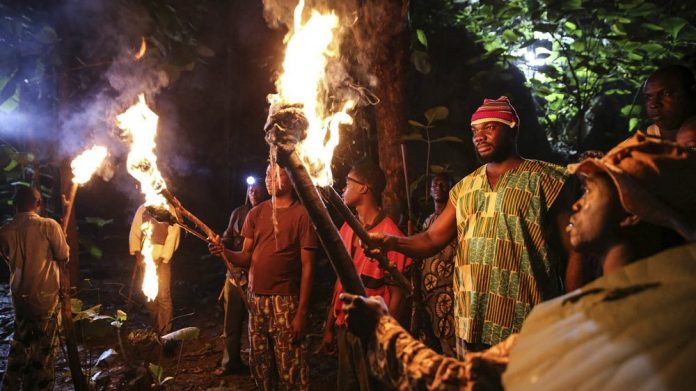 The continent’s largest film industry has been getting mental health all wrong with dangerous consequences. Now, that’s changing, find out how in this one from our archives.

Muttering to herself, a dishevelled woman stirs the contents of a pot cooking on an open fire.

“Son of laughter, son of pain,” she rambles incoherently, before pleading: “Have you seen my body? My body, I’m looking for it!”

The scene comes from the 1999 film Conspiracy, a classic that still tops lists of all-time favourite hits churned out by Nigeria’s prolific Nollywood film industry.

The story revolves around a woman named Grace — played by legendary Nigerian singer, actress and politician Onyeka Onwenu — who is accused of infidelity and then cursed by the village elders.

The curse causes a bizarre array of “symptoms”. At times, Grace will randomly burst into laughter, her head lolling. In other scenes, she whoops and claps her hands in childlike excitement. Often her behaviour inexplicably turns violent and destructive. It’s unclear exactly what illness Grace is meant to be suffering from. But no matter. The characters around her have their own name for it.

Grace is simply “a mad woman”.

For most of Nollywood’s history, this is how mental illness generally looked on screen — a jumbled mix of scary symptoms with no diagnosis, no treatment and almost no causes except the supernatural.

Those stereotypes, of course, didn’t begin with the film industry. Nigerian culture is steeped in them, says psychiatrist Ayomide Adebayo, who works to reduce stigma about mental illness and has studied the portrayals of it in Nigerian film.

But Nollywood is a megaphone, he notes, amplifying information — and misconceptions — about social issues across the country.

“Part of being human is simply that we are shaped by the stories we tell. And no form of storytelling is as widespread as movies, or as visceral,” he says. “Film feels real.”

“This is exactly why we can’t afford to be careless with the stories being told in our movies.”

This is especially true, he says, in a place like Nigeria, where awareness of the causes and treatment of many mental illnesses remains starkly low.

“The general belief is that preternatural or supernatural forces — witches, evil spirits and even God — cause mental illness,” researcher Udoka Okpalauwaekwe and others wrote in a 2017 review of mental health research in Nigeria. The study, published in the Integrative Journal of Global Health, found that these types of beliefs weren’t only confined to the general public but were also held by some healthcare workers.

The gap in knowledge has real consequences for people living with mental health issues. Several studies reviewed in the research found that people who had an accurate understanding of the causes and implications of mental health were less likely to stigmatise mental illness.

“The impact of the stigmatising attitude and poor knowledge of mental illness among Nigerians has been shown to be a major hurdle to improving mental health in Nigeria,” researchers explain.

A 2018 study found that about 6% of surveyed adults were living with depression in the country’s Lagos State. The research, published in the Journal of Comprehensive Psychiatry, revealed that another  4% reported living with anxiety.

But the country’s first and only mental health policy was written in 1991 and revised in 2013. The document aims, for instance, to provide mental healthcare closer to people’s homes and outside of large hospitals. It also says the government should develop strategies to reduce stigma and discrimination.

Although the country has tried several times to introduce a mental health Act, it has yet to be passed into law and numerous studies have highlighted gaps not only in legislation but also in mental health services, budget and treatment.

Mental illness, meanwhile, has been a core feature of Nollywood since its inception in the early 1990s.

As the legend goes, the industry as it is known today got its start when a Lagos salesman called Kenneth Nnebue found himself saddled with a large shipment of blank video cassettes from Taiwan.

Nnebue had some experience in the business: he had already been filming Yoruba theatre productions and was selling pirated foreign movies to the burgeoning home video market.

Nnebue wanted to recoup the losses of the consignment of cassettes and so financed a local film to be shot cheaply and sold on the streets.

The production, Living in Bondage, told the witchcraft-and-murder tale of a man who ritually sacrifices his wife to a cult in return for a lifetime of riches. But his newfound wealth slips away as her ghost pesters him, eventually driving him to an unspecified form of “madness”. It is only when the widower eventually goes to church and finds redemption that his sanity returns.

Despite — or maybe because of — the melodramatic acting and low budget, the film was a mega-hit, and an industry was born. Soon, shoestring budget films were being churned out at a rate of between 30 and 40 a week.

The vast majority followed the same recipe as the first: betrayal, witchcraft and redemption.

They resonated strongly with an audience hungry for stories it had never seen on film — Nigerian narratives with their own lenses through which to view mental health.

“Every civilisation tries to grapple with mental health using the information available to it”, Dami Ajayi, a Lagos-based poet and doctor at the Federal Neuropsychiatric Hospital explains. “We are a cultural and religious people who still hold on to our ancient practices, so the idea that mental illness is caused by spiritual afflictions … is still very popular around us.” 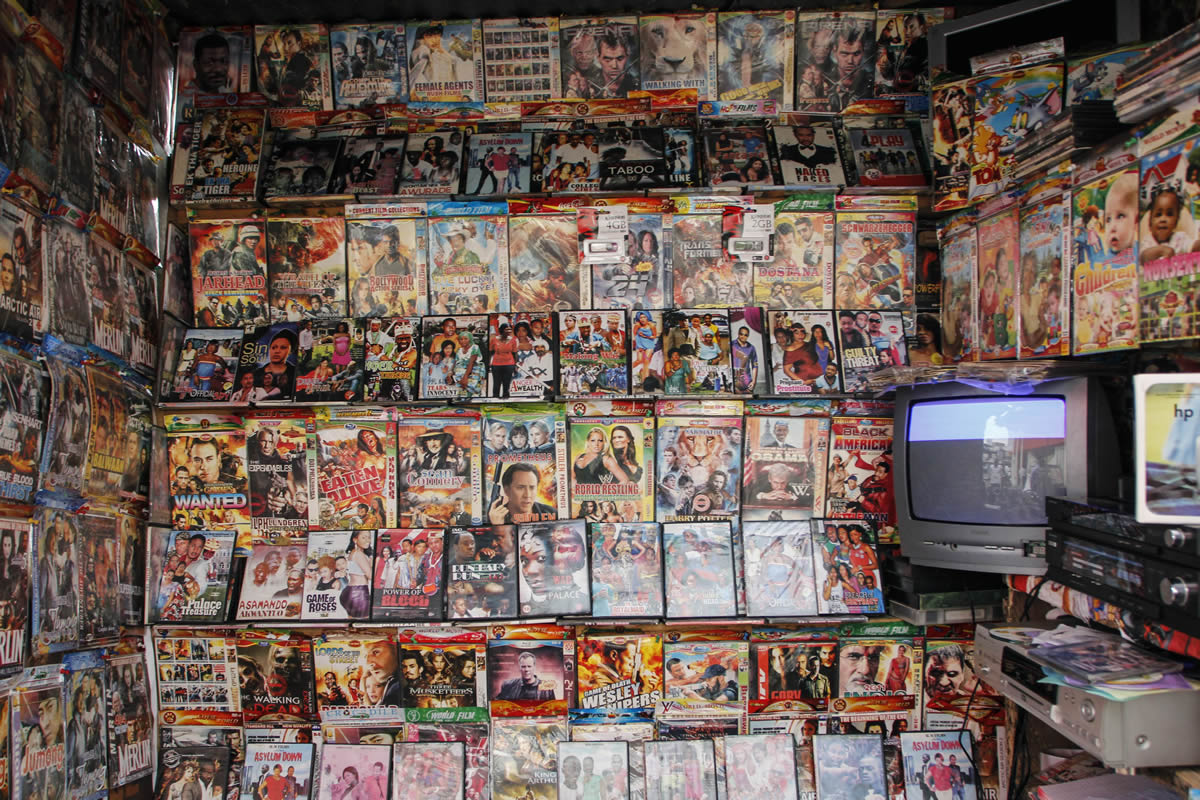 Africa’s most beloved film industry is flipping the script on mental health. (AFP)

Three decades later, it is hard to overemphasise just how big the industry has become — not just in Nigeria but also across the continent and beyond. Among film industries worldwide, the United Nations Educational, Scientific and Cultural Organisation ranked Nollywood second only to Bollywood in the number of movies it produced annually by 2011.

But for many, Nollywood’s portrayal of mental illness has long been a cause for alarm. A 2014 study sought to figure out just how Nollywood and the West African film industry was painting psychiatric illness.

Researchers reviewed 163 films from the region and, although only about 15% featured portrayals of mental illness, the majority of cases were ascribed to sorcery and curses. More than half never featured any attempt to treat the illness, the study published in the journal Medical Humanities revealed.

People often take what they watch on screen into their doctor’s offices. Researcher and psychiatrist Olatunji Aina knows this first-hand.

“In the course of clinical practice, I have encountered patients and their relatives attributing mental illness to supernatural forces and quoting the films they watched as one of the sources of their information,” she writes.

“This erroneous belief usually makes it difficult for the patients to gain the required insight [into their illness], with subsequent poor compliance with treatment.” 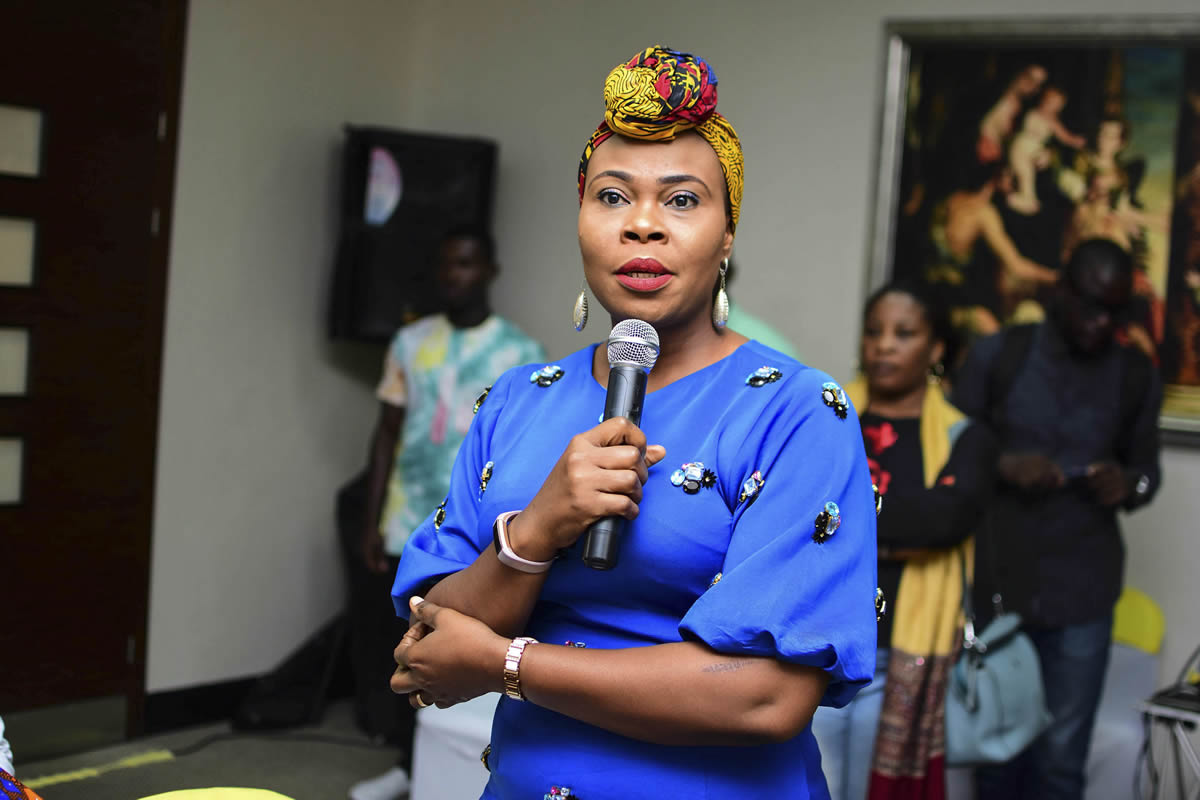 Representation matters. That’s why Maymunah Kadiri is looking to challenge the Nollywood norm when it comes to mental health.

For Lagos-based neuropsychiatrist Maymunah Kadiri, it was time to flip the script.

“Our movies have loads of stereotypes — the mentally ill must eat from trash, be on the street, [be] violent …” she says.

“For me, it was pertinent to start changing the narrative.”

Kadiri dipped into her own savings and got to work. First came Peppersoup, a short film about substance abuse. In it, a carefree celebrity gets addicted to an unknown substance after eating at a roadside food shack. (It later turns out that, to attract more patronage, the vendor had laced the dish with drugs to keep customers coming back for more.)

The positive feedback she received for her sensitive portrayal of addiction in that film encouraged Kadiri to think bigger.

In November 2017, she released her first full-length feature, Little Drops of Happy, the story of a mother’s struggle with postpartum depression and an abusive husband.

The film features something perhaps never before seen in a Nollywood film: a couple talking to a professional counsellor, hashing out their marital problems under her trained eye.

“Me depressed? An African man like me depressed?” the husband, Femi Ojo, repeats during the counselling session, after being told he may be experiencing depression. “That thing is for weak women.”

“Depression is not a woman’s sickness,” the counsellor counters coolly. “Men get depressed every day in this country, all the time.”

Little Drops of Happy has enjoyed modest box office success with screenings in major cities across the country such as Lagos, Abuja and Port Harcourt.

As for Kadiri, she knows her films are still swimming against the tide of the industry — and society — at large. But she says a change has to start from somewhere.

“Media and entertainment are big avenues to change people’s mindsets,” she says. “For issues like mental illnesses with a high [level of] stigma attached to them, when [people] start seeing things in an entertaining way through platforms like Nollywood, they start thinking differently.”