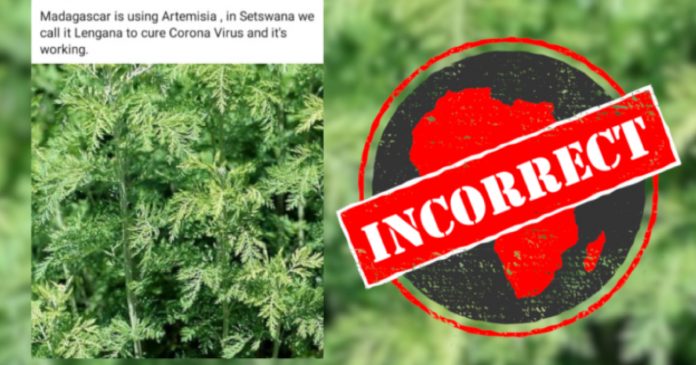 Africa Check separates fact from fiction when it comes to the lastest unproven treatment being peddled for the new coronavirus.

South African Health Minister Zweli Mkhize announced on Twitter Wednesday that Madagascar had contacted South Africa for help in studying the plant, artemisia, as a possible treatment for the new coronavirus. The request came after the country’s president Andry Rajoelina has publically endorsed the unproven treatment.

“We will only get involved in a scientific analysis of the herb,” Mkhize tweeted. “We are not at that point yet.”

But what does the data say about this Madagascar herb? Our friends at the non-profit fact-checking organisation Africa Check took a look and below is what they found:

“Madagascar is using Artemisia, in Setswana we call it Lengana to cure Corona Virus and it’s working,” says a Facebook post from 25 April 2020.

Similar posts claim the plant, a key ingredient in a tonic endorsed by Madagascar’s President Andry Rajoelina, is a COVID-19 cure.

“The name of the herb is: Umhlonyane (Zulu), Lengana (Sotho) and Artemisia (English) and it can be found in your yard. So all along you had a COVID-19 cure in your home,” says another post published on 27 April.

Artemisia is used in traditional medicines. In 2012, the World Health Organisation (WHO) said remedies containing the dry leaves of the artemisia plant could be used in combination therapy “with an effective antimalarial medicine” to treat “uncomplicated malaria”.

But is artemisia a cure for COVID-19, the disease caused by the new coronavirus?

Madagascar academy of medicine issues warning over the claims

On 22 April, Rajoelina launched Covid-Organics, an artemisia-based herbal drink developed by the Malagasy Institute of Applied Research to prevent and cure COVID-19.

Rajoelina said preliminary tests had proven that the drink was effective after just seven days. “Tests have been carried out – two people have now been cured by this treatment,” he reportedly said at the launch of the tonic.

“Schoolchildren should be given this to drink … little by little throughout the day.”

But on 23 April the National Academy of Medicine of Madagascar (Anamem) released a statement explaining that the effectiveness of COVID-Organics in preventing and treating COVID-19 had not been adequately tested.

Part of the statement, in French, translates as: “It is a medicine for which the scientific evidence has not yet been established and which risks damaging the health of the population, in particular, that of children.”

“According to the law, only health professionals within health facilities are authorised to distribute medicines and not administrative structures. We appeal to the sense of responsibility of the competent authorities and of the parents of pupils.”

In fact, the unproven tonic was tested in fewer than 20 patients. And the data is nowhere to be found, publically at least…

The tonic was tested on fewer than 20 patients. Data from the study has not been made available.

The WHO says there are currently no vaccines or medicines to prevent, treat or cure COVID-19.

“Possible vaccines and some specific drug treatments are currently under investigation. They are being tested through clinical trials,” it explains.

Madagascar’s president has launched an artemisia-based tonic for COVID-19. But there is no evidence it cures the disease.

The bottom line? ‘Africans deserve to use medicines tested to the same standards as people in the rest of the world,’ WHO says

On 4 May 2020, the WHO in a statement noted that medicinal plants such as Artemisia annua “are being considered as possible treatments for COVID-19 and should be tested for efficacy and adverse side effects”. The health agency said it has been working with countries to ensure safe and effective traditional medicine development in Africa by providing financial resources and technical support.

But these should be properly tested. “As efforts are underway to find treatment for COVID-19, caution must be taken against misinformation, especially on social media, about the effectiveness of certain remedies. Many plants and substances are being proposed without the minimum requirements and evidence of quality, safety and efficacy.”

It added: “Africans deserve to use medicines tested to the same standards as people in the rest of the world. Even if therapies are derived from traditional practice and natural [sic], establishing their efficacy and safety through rigorous clinical trials is critical.”