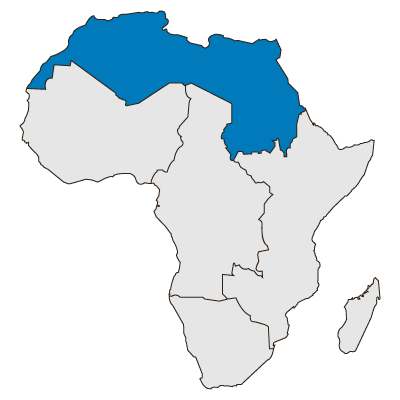 Main health concerns
North Africa has a different set of health challenges than the rest of Africa. According to the World Bank, non-communicable diseases such as heart disease, strokes and diabetes are becoming primary causes of death and disability in North Africa. Risk factors for non-communicable diseases in the region include unhealthy eating and consequent obesity, high blood pressure and smoking. Non-communicable diseases are spreading so fast that the World Bank argues that the disease burden in North Africa is becoming similar to that of the United States and Western Europe. The 2013 Global Burden of Disease report found that lower back pain, depressive disorders, anaemia and diabetes are commonly responsible for disability. Malnutrition, particularly among children, is also a significant problem.

HIV is not as prevalent as in sub-Saharan Africa and infections are mainly concentrated in high risk groups such as commercial sex workers, intravenous drug users and men who have sex with men. The region has made progress in expanding access to basic healthcare services and improving the health status and quality of life of its population.

Our Stories from North Africa

The jabs that could save us — an introduction to COVID...

To gather or not to gather? How to better promote staying...

‘This could be a game changer’: What you need to know...