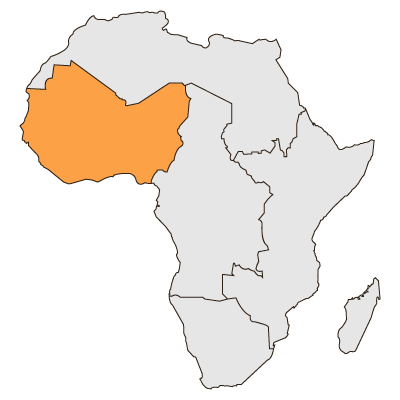 Main health concerns
West Africa featured in the news almost daily in 2014 and 2015 because of the emergence of Ebola in Guinea, Liberia and Sierra Leone. These countries had to cope with an Ebola outbreak amidst a shortage of medical personnel, weakened infrastructure and inadequate healthcare budgets.

HIV, malaria and tuberculosis are health challenges in the region, although West Africa’s HIV prevalence is considerably lower than on the rest of the continent. According to the World Health Organisation, in 2010 70-80% of West Africans used traditional medicine for healthcare and disease management of HIV, malaria, tuberculosis, heart disease and diabetes.

According to the African Economic Outlook 2015 poverty and inequality levels are moderate in comparison to the rest of Africa. The Economic Community of West African States (ECOWAS) has partnered with the Joint United Nations Programme on HIV and Aids to adopt the ECOWAS Regional Pharmaceutical Plan to boost the local pharmaceutical production of antiretroviral drugs and essential medicines for infectious and non-communicable diseases such as heart failure, diabetes and stroke.

Our Stories from West Africa

Tech talk: Unpacking and assembling the puzzle pieces of a COVID...

The joke’s on us, South Africa. The cruel logic of Omicron...