Female condoms may have been criticised for being noisy, intimidating and expensive, but their prominence and popularity in South Africa are steadily increasing.

"Women often say using it can increase pleasure because the outer ring gives sensation to the clitoris and internally the ring or sponge can give extra sensation for the man and woman," said Mags Beksinska, a senior researcher at the University of the Witwatersrand-affiliated health organisation Maternal, Adolescent and Child Health.

Since 2008, condom use in South Africa has declined from 85.2% of males between 15 and 24 who said they had used a condom during their last sexual encounter to only 67.4% in 2012, according to the Human Sciences Research Council's latest national household survey.

The female condom is the only female-initiated dual-barrier method – offering protection against both pregnancy and sexually transmitted infections – currently available.

"All female condoms are inserted into the vagina with a sponge, ring or capsule. There is an external ring or frame which keeps the condom from being pushed inside the vagina during sex," explained Beksinska.

The first-generation female condom, the FC1, has been available in other countries since 1993 but only arrived in South Africa in 1998.

It has received criticism from users that includes its being noisy during sex, complaints about the large, intimidating rings and the much higher cost compared with male condoms.

New condoms on the market
However, there has been a series of innovations over the years, and manufacturers have paid attention to bringing down costs as well as ensuring that female condoms deliver a more pleasurable experience.

The FC2 condom, which has been available in South Africa's public sector since 2009, is a more refined version of the FC1 – it is made of a cheaper material and the manufacturing process has been streamlined to bring down costs significantly.

"The material [of the FC2] is synthetic latex, similar to medical gloves, and is thought to be less noisy [than the FC1] although noise was a bit of a myth," said Beksinska. "A few people mentioned it and it was blown out of proportion."

A number of other female condoms have been invented and are in various stages of development, testing or approval.

The Cupid, which was approved or "pre-qualified" by the World Health Organisation last year, is inserted using a medical-grade sponge instead of the flexible ring found in the FC brands.

It is available in a natural colour as well as pink and is the only female condom that is vanilla-scented.

It is the second condom that can be procured globally for the public sector donor market. Beksinska said this is significant because most female condom programmes are donor funded.

According to Beksinska, one of the latest female condoms on the market is the Women's Condom, which has been developed by the international organisation Programme for Appropriate Technology in Health.

Vivian Naidoo, from the organisation's Johannesburg branch, said that the designers have taken the complaints into account and developed a condom that is, among other things, easier to insert.

The condom is enclosed in a small tampon-shaped capsule that dissolves once it is inserted into the vagina, releasing the condom sheath.

To avoid having a ring or sponge device to hold the condom in place during use there are four small patches of foam on the sides of the sheath that cling to the vaginal wall.

First-hand account
Naidoo has used both the FC2 and Women's Condom with her husband.

"The FC2 is a bit messy [it comes with pre-added lubricant] and is not as easy to insert as the Women's Condom," she said.

"The material of the newer condom is very thin, it isn't noisy and both my husband and I found it pleasurable."

She said the lubricant comes in a separate sachet, which gives users more freedom to decide how much or little to use.

Marion Stevens, co-ordinator of the reproductive group Wish Associates, said there are a number of other advantages to using female condoms. The FC2 and the Women's Condom are made of a thinner material that "warms to body temperature so sex can feel more natural than with a male condom".

She said some men have reported that they like the sensation of "their penis bumping against the inner ring" of some female condoms, such as the FC2.

The sponge of the Cupid condom can help to absorb semen, which reduces "the chance of semen spilling when the condom is removed".

Beksinska said that another reason some men like to use it is because "it does not interrupt sex as it is can be inserted before sex starts" – unlike the male condom.

Extra protection
A report compiled by the Reproductive Health Supplies Coalition (a global partnership of public, private and nongovernmental organisations focused on delivering reproductive health supplies to developing countries) noted that the female condom "also covers parts of the external female genitalia" offering more protection against sexually transmitted infections that are transferred through the skin, such as the human papillomavirus, which can cause cervical cancer.

According to the coalition, with correct and consistent use, the female condom has a 97.1% reduction in the risk of HIV infection for each act of intercourse – a similar range of protection to the male condom.

Beksinska said that, although more women know about female condoms than 10 years ago, they still need "to be normalised" and made available alongside the male condom.

She said they are usually only available at designated sites in the public sector because staff needed to be specially trained "because it does need some counselling to ensure that it can be used correctly".

South Africa's progress with prophylactics
South Africa has one of the biggest female condom programmes in the world, according to Mags Beksinska, a researcher at the University of the Witwatersrand-affiliated health organisation Maternal, Adolescent and Child Health.

However, female condoms still account for only a fraction of the total condom distribution in the country. By 2010 there were 5.1-million female condoms distributed in the public health sector compared with 2.5-billion male condoms.

The national department of health has committed to increasing distribution, but, according to the April tender for female condoms, only 15-million will be procured for the next two years. Yogan Pillay, deputy director general at the department, said that the bid evaluation process has been finalised and the recommendations are waiting for approval.

According to the government's national strategic plan on HIV and sexually transmitted infections, there should be 25-million female condoms distributed in the public sector each year by 2016. 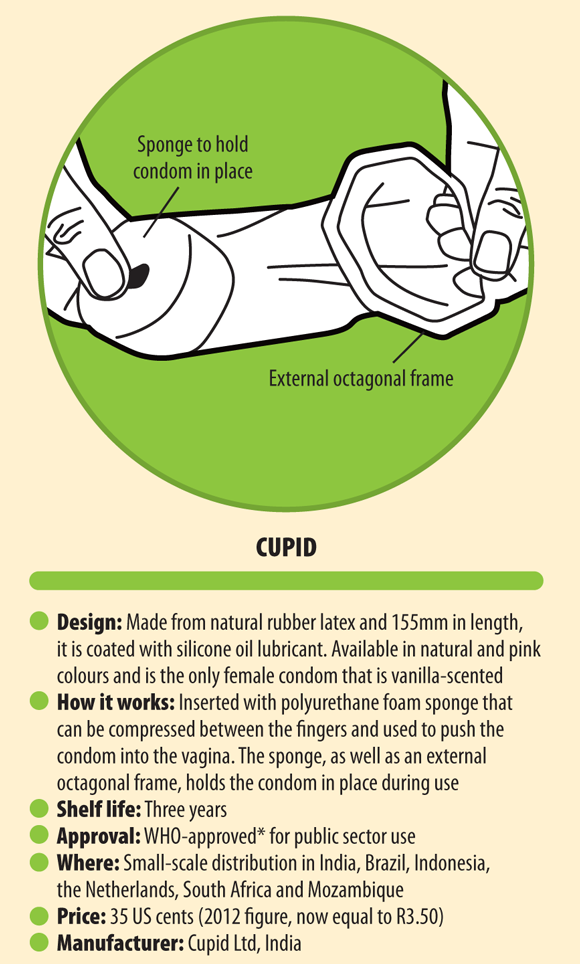 "We plan to increase [female condom distribution] in line with the national strategic plan," said Pillay.

These numbers are based on the higher cost of the female condom (R8 compared with 30 cents for a male condom) as well as the department's intention to focus distribution on target populations, including sex workers and women in informal settlements.

In the interim, the government has partnered with the United Nations Population Fund, which has procured and distributed five million female condoms in the country as an interim measure.

"Female condoms are very important. Studies have shown that, when [only] male condoms are available, women tend to have limited access to them," said the fund's Tlangelani Shilubane. 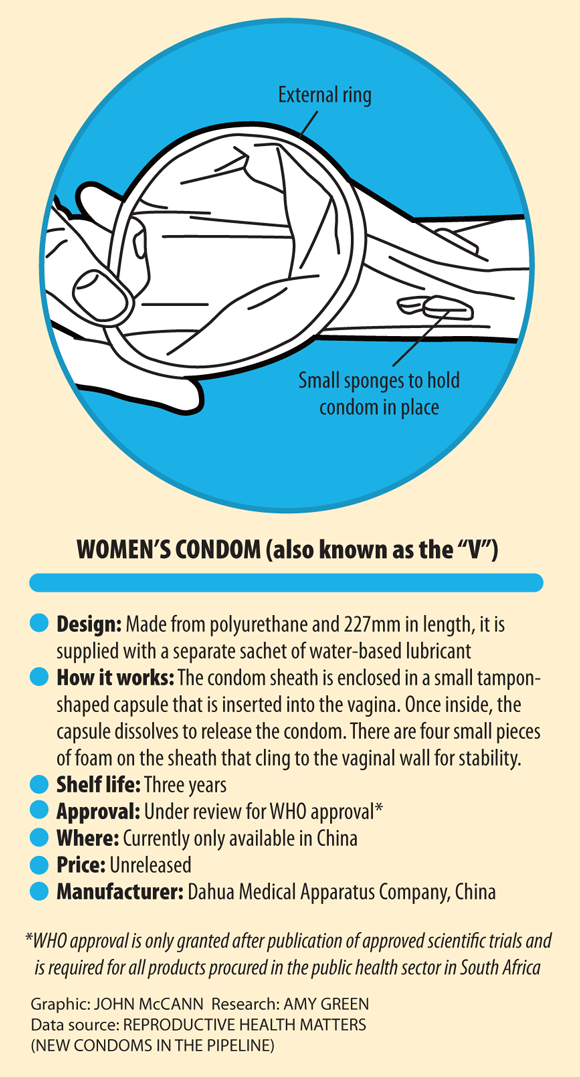 Between 20% and 25% of HIV infections in young South African women can be attributed to gender-based violence, according to the Medical Research Council.

"Most women lack the power to negotiate the use of male condoms with their partners and therefore access to female condoms gives these women another alternative to protect themselves and their family," Shilubane said.