These are the only medical staff the department of correctional services has on its payroll – the doctor:patient ratio is three times less than what is available to the general population, according to a 2012 South African Medical Journal study.

The World Health Organisation says prisoners need more doctors as they are generally sicker than people who are not in prison. Health activists argue that the same is true for prisoners in South Africa.

According to Sonke Gender Justice, an organisation that advocates for access to medical services in prisons, among other campaigns, tuberculosis is seven times more common in the country’s prisons than in the general population.

Sonke says the department of correctional services has not been able to uphold inmates’ human rights because of its inability to fill the required posts. This, said Sonke’s Marlise Richter, “has had a far-reaching effect on inmate and staff health and safety”.

Lieve Vanleeuw, a researcher who formerly worked at HIV advocacy organisation the Treatment Action Campaign (TAC), said: “Most prisons are attended by a doctor for one day or a half-day a week. This doctor might have to oversee the health of hundreds or thousands of inmates. This problem, together with overcrowding in prisons, leads to inadequate and substandard health care and violates inmates’ rights.”

Richter says the rights of prisoners to healthcare are “regularly severely compromised, as evidenced by the ineffective treatment of HIV and TB in South Africa’s prisons. In the 2012-2013 financial year, 652 inmates died of what the Judicial Inspectorate for Correctional Services categorised as ‘natural deaths’. The reality is that a great many of these were related to TB and/or HIV.”

In a memorandum presented at the South African TB Conference in June last year, the TAC and advocacy organisation Section27 said that, while the prevalence of TB and MDR-TB (multidrug-resistant TB) in prisons is unknown, “the departments of justice and correctional services [has] estimated the prevalence in prisons to be between three and seven times that of the general population”.

South Africa has the third highest TB prevalence rate in the world, according to government estimates.

High-risk environment
Emily Keehn, from Sonke, said it is vital that government finds a better way to deal with the spread of TB in prisons, especially in the context of HIV. “Having HIV and having spent time in prison are the two main risk factors for developing active TB. We know that in prisons the HIV rate is very high. Nationally, as of March 2014 … [more than] 16% of inmates were on record as being HIV positive.”

According to government figures, about 80% of people with HIV also develop TB. Keehn said, apart from medical professionals, general staff shortages in prisons were negatively affecting inmates’ wellbeing. “The shortage … [seriously affects the] health outcomes of prisoners; for example it’s one of the reasons inmates are stuck in their cells for 23 hours a day under minimal supervision. In many centres, there are not enough staff to let them out of their cells for longer than that. Also, if there is no security official available to escort inmates who are on TB or HIV treatment, the inmates cannot collect essential medicines from the pharmacy.”

In December 2012, a landmark ruling was made by the Constitutional Court in the case of Dudley Lee, who spent four years awaiting trial in prison before he was acquitted in 2004. “The ruling clearly held the department of correctional services liable for causing Lee’s TB infection. It increased the incentive on the department to improve conditions and … [the] control of TB in prison, and they [the department] can clearly be held accountable for this,” said Keehn.

Task team
She said the department’s policies have improved with the establishment of the national TB task team, which is working on better screening and treatment for inmates.

“But without addressing the material conditions that drive TB, there will be limited progress. Severe overcrowding and lack of ventilation, and the locking-up of inmates for 23 hours a day remain at [the] Pollsmoor remand detention [centre] – where Lee was detained.”

To remedy the issue of the shortage of medical staff in the country’s prisons, various correctional regions (provincial offices) have agreements with provincial health departments whereby these departments provide “medical and dental services for the inmate population on [a] sessional basis”, said correctional services department spokesperson Wolela. “Similar agreements exist between correctional facilities and nongovernmental organisations to improve health services and health promotions programmes in prison.”

But several challenges, such as inadequate infection control and maintaining the confidentiality and privacy of inmates, persist.

Overcrowding, “which has a negative impact on the delivery of health care services and conditions of detention consistent with human dignity”, remain a huge challenge, he said. 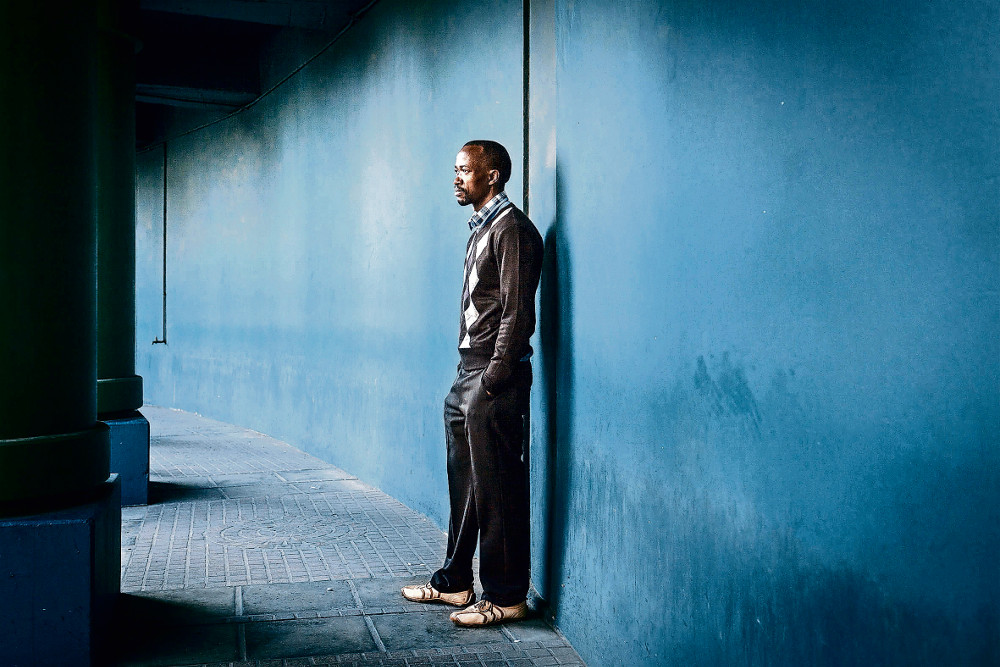 Thulani Ndlovu, a former inmate at Boksburg prison who now sits on the national TB task team that pushed for better TB screening in prisons, says the health of prisoners is not treated as a priority. (Gustav Butlex)

‘It’s overcrowded and people
are scared to get tested’

Mthetho Mdekazi survived tuberculosis twice during the 10 years he spent in prison, but many of his cellmates weren’t so lucky. “I’ve seen a lot of people die next to me. There was this one guy, from Philippi, who died of stomach TB. I would often ask myself why people are dying when we are all on the same treatment,” Mdekazi said.

Mdekazi first developed TB in 2006 because, he believes, he shared a cell with inmates who had TB and he often slept on the floor – all the beds in the cell were full. He received treatment for six months and recovered.

“I was on TB treatment for about three months. But this time the treatment didn’t work, they [the doctors] said I had MDR-TB [multi­drug-resistant TB for which ordinary TB treatment doesn’t work]. It felt like I was going to die,” he said. “Every morning for two years I had to drink 18 pills and get an injection for six months to treat the MDR-TB.”

Eight months into his MDR-TB treatment, Mdekazi developed ulcers that were so bad that he had to have surgery twice. His vision was also affected by the treatment.

Despite the side effects, Mdekazi finished his treatment.

“I just told myself that I won’t stop taking the treatment because I also want to live. I don’t want to die in prison. Therefore, I took the treatment and I recovered,” he said.

But the conditions in prison made it difficult for Mdekazi to adhere to his treatment.

“It’s overcrowded and people are scared to get tested. They are scared of being laughed at by the others. When I was sick they said I have Aids. It got so bad that at times I even thought of stopping the treatment, but I just told myself that my family needs me. I had to continue with the treatment.”

“Sometimes the medication would run out, and it would take two days for the pills to be ordered from an outside hospital. Then you have to wait for the medication to arrive because you can’t share your pills with others.”

Thulani Ndlovu, a former inmate at Boksburg prison who is now on the national TB task team, said the health of prisoners is not treated as a priority. “At the end of the day people die because of simple things like TB because they are given medication but they are not monitored. Sometimes a person may not be strong enough to take the medication on his own.

“They [the prison officials] prioritise their security before your health. So you have to be bedridden to be taken to an outside ­hospital,” he said.

This was the case for Vusi Sibisi, a former inmate at Leeuwkop prison in Johannesburg. In 2009 Sibisi had an adverse reaction to medication that was used to treat his genital warts. But despite lodging several complaints with the prison’s management, he was taken to Charlotte Maxeke hospital only close to a month after he first had symptoms. By that time, Sibisi said he was unable to walk and had to undergo several operations as a result of the delay in getting treatment. – Ina Skosana