In the space of a year and a half towards the end of 2013, a middle-aged multimillionaire lost R1-million on reckless business deals, R134 000 on speeding fines and R850 000 in the form of a new Mercedes Benz after he crashed it on a Johannesburg highway.

The car crash was the final straw for his family and business partners. His lawyers advised he be placed in a psychiatric hospital for evaluation. After the January 2014 car crash, he was admitted to Life Poortview psychiatric clinic in Roodepoort, west of Johannesburg.

Gregory Matthews, who did not want to use his real name, said he had suspected something “wasn’t right” with him for years but he hadn’t known what was wrong or where to go for help.

But his doctors at Poortview knew almost immediately what the problem was and diagnosed him with bipolar disorder.

Extreme highs and lows
Bipolar is a “mood disorder where, if untreated or mismanaged, results in changes in mood ranging from an elevated mood state, also known as mania, to a depressed mood”, according to clinical psychologist Zamo Mbele, who works at the specialised psychiatric state facility, Tara H Moross Hospital in Johannesburg. “During a manic episode a person can display symptoms like having a lot of energy, poor sleep, racing thoughts, fast speech, distractibility, restlessness and irritability,” he said.

If managed well, people can function well in society but “the reputational effects are usually very difficult to negotiate after a manic or depressive episode”, he said. “Once the bipolar is treated, individuals then have to face colleagues, family, significant others and may feel the pressure to explain what happened and that this happened during a state when ‘they were not themselves’.”

In 2013, Matthews bought a farm, a restaurant and an organic make-up business in the space of a month.

“I don’t even know anything about make-up. I was just doing things without thinking. It was like I couldn’t see clearly that these were bad business decisions and I didn’t even think about it when I did it,” he said.

Getting treatment
Matthews was placed on a cocktail of bipolar medicines that were gradually adjusted to get the right dosage.

He was then referred to a residential “step-down” facility where people with mental illnesses receive treatment aimed at reintegrating them into society. “I was resistant to go to such a place at first but then my uncle became my financial curator and said I have to do this.”

Matthews said he wanted the “nightmare” to be over and to go home but, after six months at Papillon Psychiatric Recovery Centre in Randburg, he has changed his mind about what he needed to recover. “Coming to a place like this is the only reason I made a 100% recovery. I spent so much time doing soul-searching and really discovering who I was and what I wanted from my life. I’m a totally different person now.”

Papillon’s founder and managing director, Yolande Boshoff, said: “If you treat a brain disease in the right way there is no reason you can’t live a normal life and [not have to] be placed in homes or hospitals until you die.”

Papillon places their clients, as far as possible, in jobs or internships when they are ready.

“We don’t speak about a career. We speak about finding a vocation that brings peace and happiness to someone and which will make them feel like they are making an impact,” Boshoff said.

Repairing relationships
Matthews, a self-made millionaire, was fortunate enough to have a lot of money saved to fall back on and, instead of concentrating on finding a job after recovery, he is concentrating on repairing his personal life.

“My ex-wife and I got divorced two years ago and I’m certain that if I had got treatment earlier we would still be married,” he said. “I wasn’t a good person. I was irrational and erratic. She couldn’t handle my mood swings any longer.”

According to the South African Federation for Mental Health, people usually develop bipolar disorder between the ages of 15 and 25 but it often remains undiagnosed until it has caused major problems in a person’s life, something Matthew has experienced.

He describes himself as lucky. “I never became bankrupt, even with all the money I lost. My family stepped in to help before it was too late,” he said. “If I was still destroying my life I would have actually gone broke. And then my life would be a whole lot more difficult.”

A month’s treatment at Papillon costs between R16 500 and R18 000. On average, patients stays for three months. According to Boshoff, medical aids usually only pay a lump sum of about R30 000 for 21 days of treatment, but clients are permitted to spread the amount over a longer period. 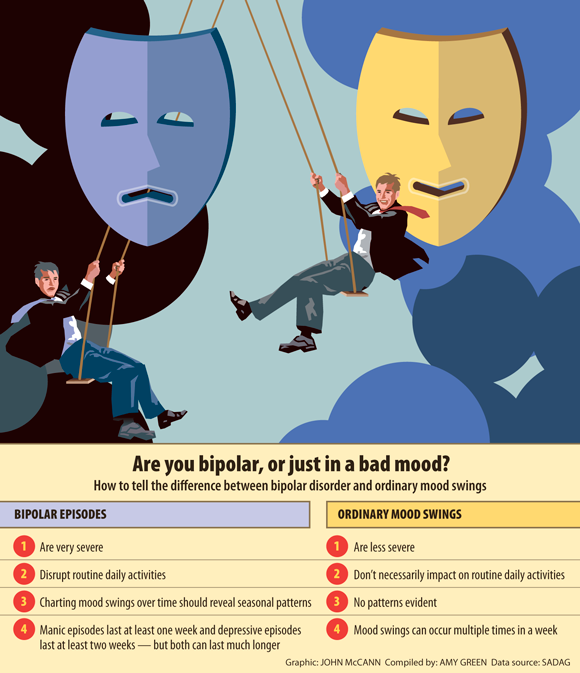 Cost of care
According to Statistics South Africa’s latest general household survey, only 18% of citizens belong to a medical aid scheme. The World Health Organisation estimates that the country spends 2.7% of its annual health budget on mental health – far below that of developed countries such as Britain, which spends 10.8%.

This situation places specialised reintegration mental health facilities such as Papillon out of the reach of most South Africans.

But for Matthews, who could afford it, things have turned out well.

He is now semiretired and receives weekly home visits from Papillon nurses and counsellors who check up on him and monitor his progress.

“I’m seeing the light, you know what I mean? And before I couldn’t see the light,” said Matthews. “Everything used to be blurry but now I can see reality for what it is.”

How to recognise and treat bipolar disorder

Bipolar disorder is a mood disorder that used to be known as manic depression. A person’s mood alternates between a manic-like phase (euphoric happiness) and a depressive phase (extreme sadness).

According to the Medical Research Council’s latest survey for mental health, which took place from 2002 to 2004, bipolar disorder accounted for 2.1% of South Africa’s total burden of disease. The United States’s Centre for Disease Control estimates there is a 4% chance of any person becoming bipolar.

People in the manic phase may feel energetic and indestructible. They may display reckless behaviour or make unrealistic plans. Talking fast and jumping between thoughts is common in this phase and people may sleep and eat less than usual. They may easily lose their tempers and will often deny anything is wrong with them.

But most people with bipolar have more depressive episodes than manic ones.

A person in the depressive phase may sleep and eat too much or too little, will withdraw socially and stop doing activities they ordinarily enjoy.

Antidepressants and mood-stabilising medicines are usually prescribed to treat the disorder.

The treatment may also include psychotherapy sessions that focus on giving the patient a better understanding of their disorder so they can better manage their condition.