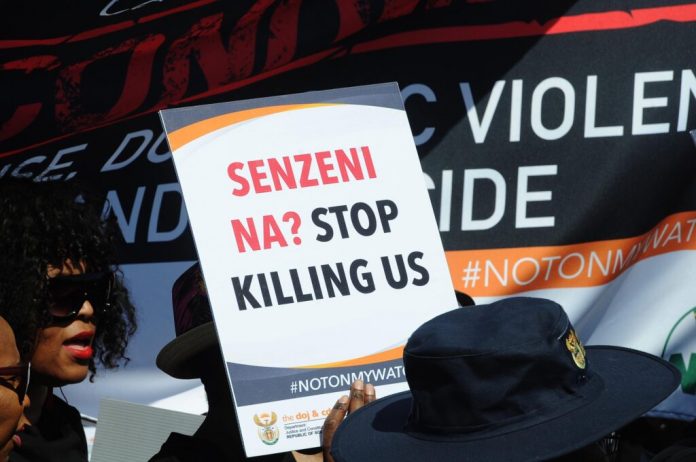 The police recently announced 30 gender-based violence hot spots to which additional resources will be directed to address violence against women. But the methods they used to identify these areas are flawed —and the hot spots might be elsewhere.

Police Minister Bheki Cele’s September announcement that the police had “pinned down” 30 areas recording the highest levels of gender-based violence (GBV) violence in the country, generated interest and hope.

“Might the targeted policing of GBV finally yield some success in the country’s attempts to address the problem?” South Africa wondered.

Unfortunately, because of the methods the police used to identify these hot spots of violence, the answer, at best, is a lukewarm ‘maybe’.

Questions of method are not academic abstractions — they have real-world consequences.

In this case, the 30 hot spots will receive extra resources and services, such as permanent desks dedicated to attending to GBV cases, DNA evidence collection kits and shelters. The identified areas will also benefit from awareness campaigns and strategies that will be launched in those zones to raise awareness of gendered forms of violence and abuse.

If we go by the 30 hot spots the police have identified, these resources will be distributed to nine hot spots in Gauteng; eight in the Western Cape; seven in KwaZulu-Natal; three in the Eastern Cape; two in the Free State; and one in North West.

Limpopo, Mpumalanga and the Northern Cape will receive none of this government largesse, because not a single hot spot is located in one of these provinces.

A minister’s speaker note is, of course, not a research document — but Cele’s 22 September speech is the only document in the public domain that provides some insight into how the hot spots were identified.

It does — at least — outline the sources of information from which the hot spots were compiled.  One such source is the police’s crime statistics between 1 April 2019 to 31 March 2020. The specific crimes focused on are rape; kidnapping with the purposes of committing a sexual offence; trafficking, especially for purposes of sexual exploitation; murder and attempted murder within the context of domestic violence and cases of assault with intent to cause grievous bodily harm.

It is possible to compare the 30 hot spots announced in September with the various lists of ‘top 30 stations’ identified by the crime statistics, because the police have listed the 30 stations recording the highest number of reports for the selected crime categories for several years. But this is a messy exercise because the police are inconsistent with the type of details they record.

In 2019/20, for instance, the police provided no statistics on trafficking. They also didn’t disaggregate the statistics of their top 30 stations lists — for murder, attempted murder and assault with the intent to cause grievous bodily harm — by gender. So it’s not possible to speculate on how many of these crimes occurred within the context of a domestic relationship. There is also no breakdown of the number of kidnappings occurring in the context of sexual offences.

Police stations that report the most rape missing from ‘hotspots’

Ultimately, it is rape that offers the least confusing comparison between lists.

Because the 30 hot spot stations are being prioritised for DNA evidence collection kits, it is particularly important that they match the top 30 stations for rape — DNA evidence is crucial to solving and prosecuting cases of stranger and serial rape (meaning that all stations should, by right, be receiving such kits).

And yet eight of the top 30 stations for rape are not included amongst the 30 hot spots, with three of these stations being in Limpopo, a province with no GBV hot spots, according to the police.

[WATCH] Forced abortion: ‘The baby was already developing … I could see the fingers’

Given that it recorded the fifth-highest number of reports of rape in 2019/20, the exclusion of Thohoyandou is especially surprising. Lusikisiki in the Eastern Cape is another notable omission, featuring in the top 30 stations for both rape and murder.

It is also not obvious why Kopanong in the Free State, Butterworth in the Eastern Cape and Bellville in the Western Cape were included among the hot spots — none of the three feature on any of the relevant top 30 station lists.

What about those left uncounted?

Much GBV data is, of course, skewed by the fact that many survivors of rape and domestic violence do not report the violence done to them to the police. The most recent data on under-reporting, now a decade old and drawn from a community-based survey conducted in Gauteng, found that although about a quarter (25.3%) of the women interviewed had experienced sexual violence in their lifetimes, only one in 25 had reported the rape to the police.

Between April 2008 and March 2009, a total of 12 093 women in Gauteng, or 0.3% of the province’s adult female population, reported an assault by an intimate partner to the police in the province. By contrast, during the same time period 18.1% of women in the province reported an experience of violence at the hands of intimate male partners to researchers.

The police seem to have attempted to take under-reporting into account by also deriving their information from the Thuthuzela Care Centres (one-stop centres where rape can be reported and medical and psychological services can be accessed), health facilities, ‘calls related to domestic violence and gender-based violence’ (probably referring to calls made to the Gender-Based Violence Command Centre), and “other data from other departments” — a phrase so vague as to be meaningless.

The Thuthuzela Care Centres (TCCs) may be a useful source of data — the others less so. According to the National Prosecuting Authority’s 2017/18 Annual Report, 33 973 sexual offences were attended to by the TCCs during that 12-month period. However, in 35% of adult cases,  the victim did not wish to pursue a criminal charge and wanted TCC health and counselling services only. The TCCs are, therefore, a potential source of information about under-reporting. Subsequent annual reports have not, however, made this information publicly available so it is unknown whether or not such calculations were available to the police.

The Gender-Based Violence Command Centre is a considerably less helpful source of information — because, while it may receive many calls, only a fraction relates to GBV. In 2017/18 the Command Centre received a total of 182 354 calls, of which 1 047 were reported as GBV cases, while of the 102 286 calls in 2018/19, just 2 257 were GBV-related cases, according to the department of justice and constitutional development’s 2018/2019 annual report.

Disorganised data hides the need for help in rural provinces

It is not only messy data, compiled on the basis of unexplained reasoning, that raises questions about how the hot spots were identified; it is also the failure to control for population size. Not doing so utterly disadvantages the Northern Cape and its small population.

Systems of ranking informed only by the total number of cases reported are going to produce lists with a predominance of stations serving densely populated areas. To correct for this, it is necessary to look at the number of crimes relative to the size of the population.

Not having adjusted station figures for population size may help explain why 24 of the 30 hot spots are found in the three most populous provinces and none in the least populated province.

Identifying where women are at particular risk of GBV, and taking action accordingly, can make a tremendous contribution to addressing violence. But you need to be sure you’ve pinpointed the right spots. Whether the police have in fact identified such hot spots of violence is open to debate.

Lisa Vetten is a research and project consultant in the faculty of humanities at the University of Johannesburg where she works on the ‘Gendered Violence and Urban Transformation in India and South Africa’ study.

Lisa Vetten is a research and project consultant in the faculty of humanities at the University of Johannesburg where she works on the ‘Gendered Violence and Urban Transformation in India and South Africa’ study.