The COVID-19 outbreak has overwhelmed our laboratories. Many labs can no longer deliver results within 24 hours and for some, these times have stretched up to 14 days. Is it time to South Africa to rethink its testing strategy?

The COVID-19 epidemic in South Africa is now in its exponential phase. Cases are rapidly increasing in many areas. This is most apparent in the Western Cape province, which could be due to higher rates of testing per capita, coupled with a more selective testing strategy than in other provinces.

The doubling time of mortality in the province’s Cape Town metro is now eight to nine days, indicating a rapid increase in the number of severe cases and deaths from COVID-19. Although the health system is better prepared as a result of the initial lockdown, major cracks are starting to show. This is causing a deterioration in clinical service which, if not stemmed, threatens the country’s response to the epidemic.

Globally, rates of testing for SARS-CoV-2 infection have varied between and within countries. For example, testing rates (per 1 000 people) range from 148 in Iceland to 0.76 in India. In South Africa, as of 3 May 2020, the testing rate was 4.5. The high demand globally for molecular assays (known as PCR) to identify infectious cases has led to a shortage of samples and kits required in laboratories.

In South Africa’s case, the rise in the number of cases in the Western Cape, and the pressure this is putting on laboratories charged with processing tests, is only the forerunner. Here, we explain what needs to be done, and why.

Diagnosis of COVID-19 relies on a laboratory test that is simple, but laborious. The time taken from the sample being taken to the communication of the result – the “turnaround time” – is influenced by a number of factors. These include the speed at which the sample reaches the lab, the lab’s capacity to run the test – access to reagents and test kits, number of analysis machines, availability of staff, errors leading to a need for re-testing – and the communication process.

Early reports by the National Health Laboratory Service indicated that it had the capacity to do 36 000 tests a day by the end of April 2020. But the capability to do so has not materialised.

Currently, the number of tests received in laboratories exceeds their capacity to deliver results within 12-24 hours of sampling. In many parts of the country, turnaround time has increased from 24 hours to over 5-14 days. According to correspondence we have seen, some labs with the capacity to do 1 000 tests a day have a backlog of 10 000.

Why is “turnaround time” so critical?

Identification of infectious cases – even if only a quarter of those who are infected are identified – coupled with adequate tracing of their contacts and ensuring isolation (of cases) and quarantine (for up to 14 days) of test-negative contacts, could assist in slowing the rate of community transmission of the virus.

But for such a strategy to be effective requires a clear line of sight in terms of efficiency of testing, isolation of cases as quickly as possible (within 12-24 hours of being tested), and effective and immediate tracing of their close contacts.

It is estimated that any single case will, on average, have 20 close contacts (probably higher in South Africa) who should be traced. These include any close contacts (someone who spends more than 15-30 minutes within 1.5 metres of the person) occurring from at least 2-3 days prior to symptom onset in the identified case, and up until the case has been isolated. Assuming that isolation occurs on the third day after symptoms appear, for each case there would be approximately 120 close contacts to be followed up.

For this strategy to assist with slowing the spread of the virus requires tracing (and physical contact for screening for symptoms) of approximately 80%. Although possibly achievable in the initial phase of the epidemic, it becomes an unrealistic goal to aspire to when identifying 400 “new cases” each day, as that would require tracking and physical tracing of approximately 5,200 contacts.

This is why the turnaround time matters. A delay means that the current “new” cases reported in South Africa reflect cases that were likely sampled approximately a week ago.

This points to the need to shift the focus of PCR testing to patients being admitted to the hospitals. This would inform the management of the patient and limit the likelihood of spread within hospitals.

But the turnaround time for this cannot be anything more than 12-24 hours if it is to achieve any of these goals of testing. When a person with COVID-19 is admitted to a hospital, it is critical that they do not infect others. We achieve this by triaging patients into those who are COVID-19 suspects (a “person under investigation”) and those who are not. We separate patients into different wards accordingly.

Slow turnaround time for tests means a delay in diagnosis. The longer the turnaround time, the worse it gets. As the epidemic accelerates in South Africa, the number of patients needing to be admitted to hospital as a “person under investigation” and subsequently COVID-19-confirmed cases rapidly rises, and the system becomes overwhelmed.

This is why we are arguing for a wholesale change to the current system.

How we fix this

We believe the following crucial steps need to be introduced as a matter of urgency.

Shabir Madhi is a professor of vaccinology and director of the Medical Research Council's respiratory and meningeal pathogens research unit at the University of the Witwatersrand.

Marc Mendelson is a professor of infectious Diseases at the University of Cape Town. 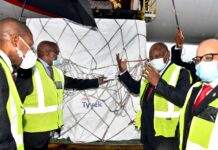 SA teens, you’re up for a vaccine, without your parents’ permission

Gift of the jab: 6 tips for speaking to the unvaxxed

In the science kitchen: Making the perfect burger