Philda Dladla, 59, enters a green and white card, with a thick red line running across it, into a small opening in a machine that looks like an ATM.

It’s so that the machine can scan the card.

It’s a Thursday around 10am. Around her, people are rushing to do their end-of-the-month grocery shopping and taxis are blowing their horns to attract passengers.

But there aren’t any bank notes popping out.

Instead, the face of a pharmacist appears on the screen.

“Is your medication treating you well?” he asks.

Dladla smiles: “Yes, it’s working for me, thanks.”

The pharmacist responds: “Are you experiencing any side effects since your last collection?”

Then the machine spits out two small white boxes with red pills.

It’s a two month supply of her antiretroviral drugs. 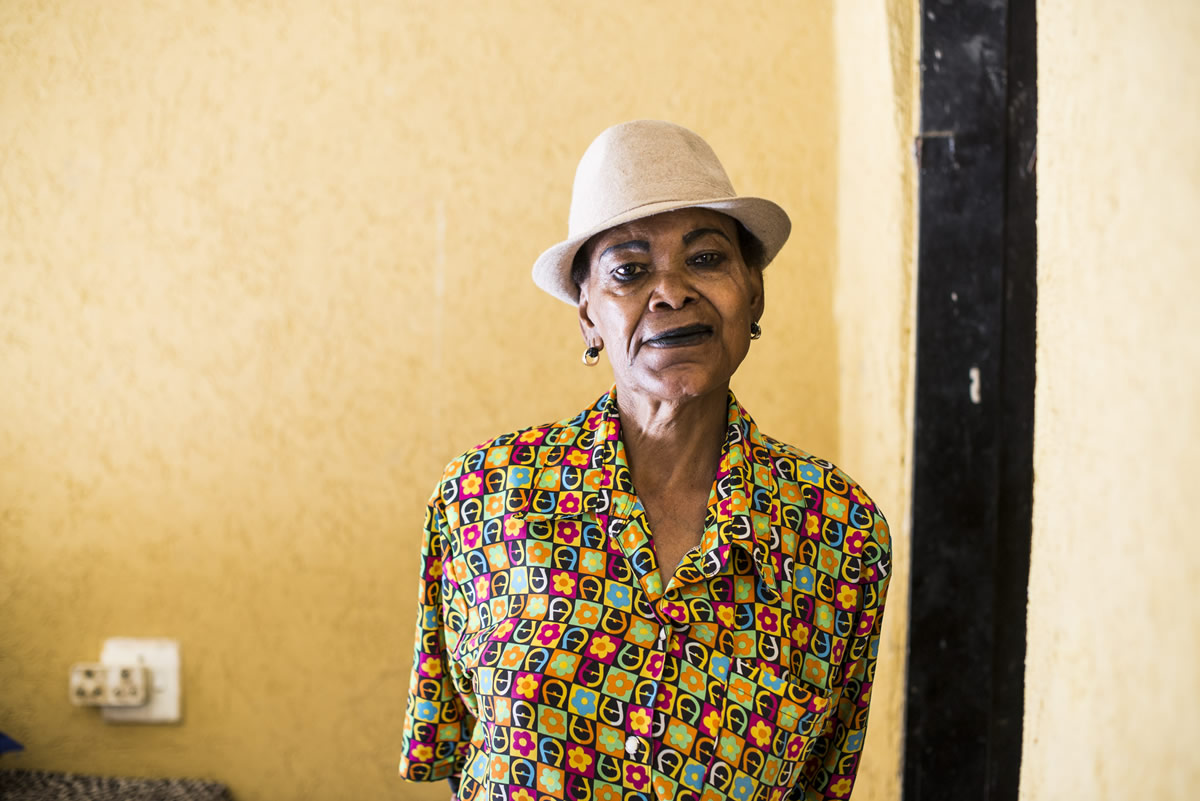 Philda Dladla collects her ARVs from a pharmacy dispensing unit in a shopping centre. Her waiting time has been cut down from 12 hours to three minutes. (Delwyn Verasamy, M&G)

For almost 15 years, Dladla collected her monthly HIV medication from the 8th Avenue Clinic in Alexandra township in Johannesburg.

The facility is only three streets away from where she lives in 11th Avenue. But that didn’t necessarily make things easier.

Once she got there, she says, she would be faced with waiting in a line for 12 hours.

“I would be in the queue by 5am and would then get back home by 5pm,” Dladla explains. “By that time, you’re so hungry.”

The machine from which Dladla collected her medication today is called a pharmacy dispensing unit (PDU). It was installed at the Alexandra Plaza shopping centre three years ago.

She says: “With this machine, whether you come early or you come late, you go home early.”

It took Dladla only three minutes to get her medication.

How do ATMs work? Listen to Bhekisisa’s Nelisiwe Msomi explains in this radio interview with Salaamedia

Because the PDU is located in a shopping centre, Dladla could do some grocery shopping as well.

This time around, she bought some sweets for her grandchildren.

“When it’s month-end they come and visit me,” Dladla explains. “They expect me to spoil them with goodies such as yoghurt.

“When I collected my medication from the clinic, they would not find me at home. But now, at 1pm, when school is dismissed, I’m home and they know that I will be waiting for them.”

South Africa is the first country in the world to use pharmacy dispensing units, says Ian Sanne, from the health organisation, Right to Care. The non-profit helps the national health department to install and maintain the machines, which are funded by the German and United States governments.

The shopping centre in Alexandra has four such units. In total, there are six such sites in the country. There are also PDUs in Diepsloot, and two sites in Soweto and one Bloemfontein.

Sanne explains: “Each site has the capacity to cater for 50 000 scripts per month. The machines dispense chronic medication for illnesses such as HIV, hypertension, and diabetes.” 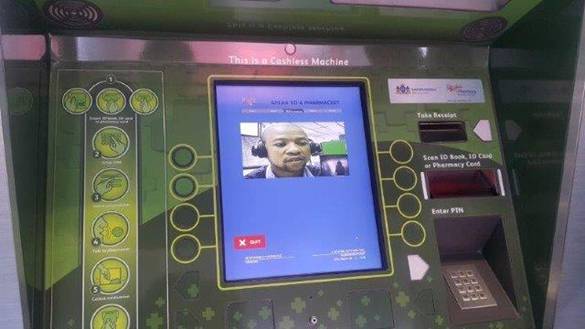 Pharmacy dispensing units allow patients to talk to on-screen pharmacists, should they experience any side effects from their treatment. (Supplied)

Since its opening in January 2017, the four machines in Alexandra machine have provided medication to more than 8 000 patients.

Sanne says Alexandra and Diepsloot were selected as piloting areas for the PDU project because of the size of their populations.

“We chose them because they are underserved communities. We focused on high-density urban areas because of the cost of capitalising the project. We need lots of feet through the door,” he says.

About 7.9 million people of South Africa’s population of almost 58 million are HIV positive, according to the Human Sciences Research Council’s 2017 household survey. Health department statistics show that 4.3 million were on treatment by August 2018.

“The PDUs cut down the time patients have to spend waiting at pharmacies.

“Because PDUs lighten the burden on clinics, nurses, doctors and pharmacists are able to spend time with the patients who still collect their drugs at clinics. That way, they have more time to explain to patients what drugs they are getting, how they must take them and what the side effects are,” says Pillay.

“Those are the patients who might experience side effects and need to see a doctor or nurse on a regular basis, as opposed to the PDU patients who don’t need that.”

Decanting is not new in South Africa. In 2011, the Western Cape government adopted an adherence club model of decanting, where patients who had been adhering well to their chronic treatment, could receive their medicine at pick-up points such as crèches, schools, churches or even the house of a club member. 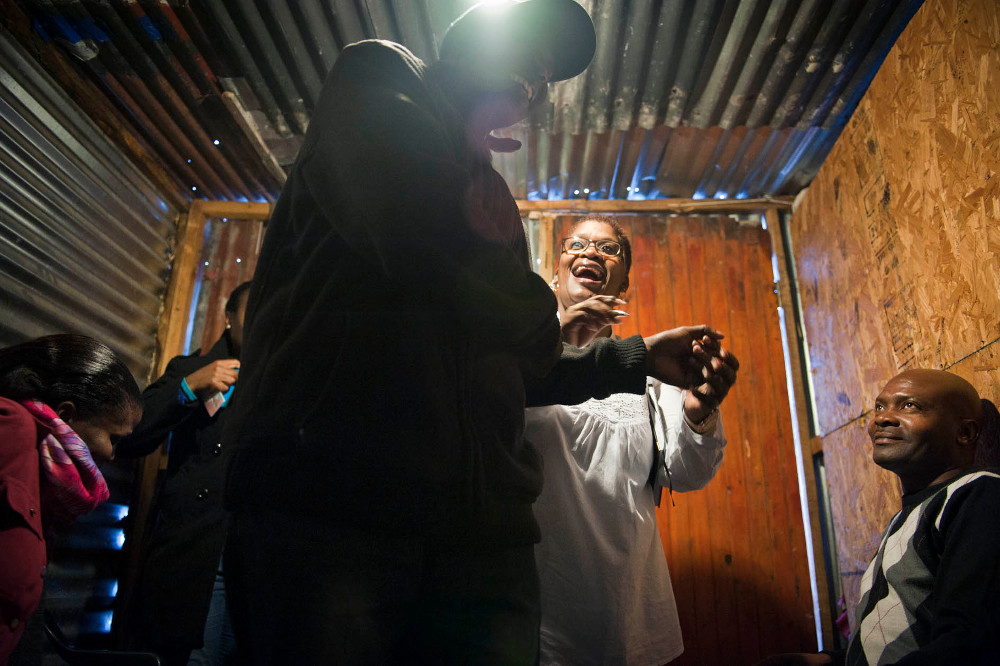 Adherence clubs help people with HIV to access their medication at central points close to their homes instead of having to queue up at healthcare facilities. (Madelene Cronjé, M&G)

Sanne emphasises that only patients with clinic records that show that they’ve been using their medication correctly are suitable to collect their drugs from PDUs. But he also points out that life commitments prevent some patients from picking up their treatment at clinics.

“So if your employer doesn’t allow you to go to the clinic every month to go get your medicine, then that can lead to treatment interruption,” he says.

“What we are trying to do with the Right e-pharmacy [the Right to Care programme that runs the PDUs] is to make it easier for people to collect their medicines at a time that suits them. Within a window of a few days of their pick updates, they can come between the shopping centre’s operating hours to fetch their medicine. The intention is to address non-adherence.”

Sanne says that they don’t anticipate stockout problems at PDUs, as the computer system that the programme uses can calculate potential stock outs a week in advance and then alert the department of health.

“Reordering is much more automated than in the normal clinics or hospitals because we actually know what we need because of the data systems,” he explains.

Pillay says the expansion of PDUs will depend on patients’ responses to pilot sites.

Back at the shopping centre, Dladla is signalling for a taxi.

It will be a five-minute ride home.

There, she will wait for her grandchildren with the bag full of sweets she bought for them.

The next morning, she’ll go back to her daily routine: waiting for the soapie, Muvhango’s familiar tune at 9am — the sign that it’s time to take her three-in-one ARV pill.