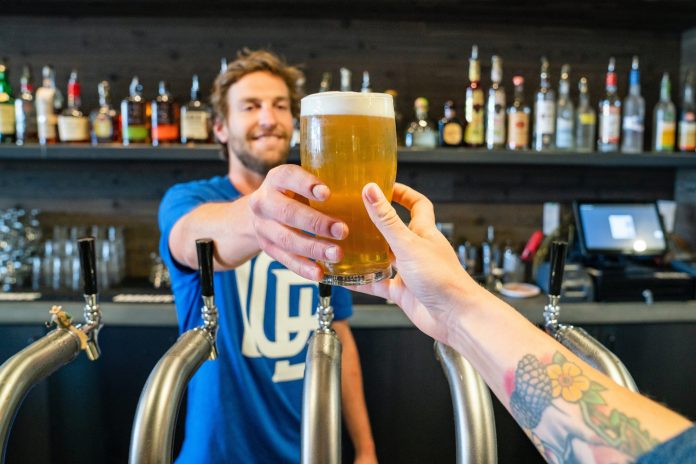 You can now have a beer at a pub each day of the week. There are no limits to how much you can drink or how many alcohol promotions taverns and liquor stores can offer. Is this a good thing?

Given the drop in pressure on hospitals from COVID-19 patients it is logical that the government has ended the ban on liquor sales as part of steps to reopen the economy.

The two interventions implemented on 13 July — the temporary ban on liquor sales and the curfew — did work in that trauma presentations at hospitals were reduced by more than a third in the Eastern Cape, Gauteng, KwaZulu-Natal and the Western Cape, according to unpublished provincial government reports. This was substantially more than the decrease that was predicted by a modelling study undertaken by the South African Medical Research Council (SAMRC) at the beginning of July.

I have two concerns with the way in which the ban on liquor sales has been lifted. First, opening of on-consumption liquor sales at bars, casinos, taverns and shebeens — even if only 50 people are allowed to gather — is worrying in terms of the risk for increasing community transmission of the coronavirus and re-igniting a second wave of infections. As Anthony Fauci, director of the United States government’s National Institute of Allergy and Infectious Diseases, has been quoted as saying: “If you [are a high risk area for COVID-19], you have a choice. You can either close the bars or close the schools.” We’ve done this, but will soon have reversed both.

Many European countries with lower risks of infection than ours have now taken a tougher stance on opening bars. In Scotland, it is mandatory to provide table service. In general, guidance has been issued in the United Kingdom on measures that pubs and restaurants must take to keep customers and staff safe. They include the option of ordering food on apps, music should be kept at a low volume to avoid people needing to shout, which increases the risk of transmission, pub-goers are encouraged to book tables in advance and live gigs and standing at the bar will not be allowed.

READ MORE: Drinking heavily increased the odds of violence by men who already have violent tendencies against women by 50%, a study conducted in a section of Diepsloot found

South Africa is opening up alcohol sales without any such regulations. I would have liked to have seen on-consumption sales limited to restaurants serving a meal up to a specified amount. In Ireland, the threshold for such meals is 9 euros.

My second concern is that we are likely to see an even bigger surge in alcohol-related trauma admissions and non-natural deaths than when alcohol sales resumed at the start of level 3, because we now have on-consumption outlets selling alcohol seven days a week until 10pm. Simply telling people to drink moderately and responsibly is not going to be enough, we’ve seen in various research studies.

I was disappointed that the president didn’t announce more stringent regulatory controls on alcohol to curtail the likelihood of heavy drinking and alcohol-related trauma cases at hospitals when he made the announcement to lift the second ban on sales of liquor in South Africa.

Measures proposed to government by the SAMRC prior to the president’s announcement on Saturday include:

Disaster management regulations alone, however, were never going to be a long term fix for the problems of heavy alcohol use in South Africa, where, according to the World Health Organisation, 59% of drinkers engage in heavy episodic (binge) drinking and we have the dubious honour of having the world’s 6th highest level of absolute alcohol consumed per drinker per day. The consequences of these drinking patterns are high levels of trauma and non-natural deaths — and the costs that go along with it.

READ MORE: Government said no to alcohol sales during lockdown but said yes to the industry’s money for years

An underlying challenge is that parts of the alcohol industry in South Africa depend on heavy drinking to make the profits they have become used to making.

The government and Parliament now need to look at revising and passing the stalled 2016 Liquor Amendment Bill, which aims to better regulate the marketing of alcohol products to reduce exposure to minors, raise the drinking age to 21 and disallow the granting of liquor licenses to premises at petrol stations, near public transport facilities, within 500 metres of schools, places of worship or substance abuse treatment centres. The 2020 Road Traffic Amendment Bill, which aims to reduce maximum BAC levels for drivers to zero, also needs to be approved and implemented. Moreover, the stalled state needs to revisit the 2013 Control of Marketing of Alcoholic Beverages Bill as part of a package of measures to turn things around. This Bill aims to prohibit the marketing of alcoholic beverages (except at points of sale), any sponsorship associated with alcoholic beverages and the promotion of alcoholic beverages.

On a provincial level, the Western Cape needs to take the Alcohol Harm Reduction White Paper, which was approved by the provincial cabinet in 2017, to the provincial legislature. This paper, among other things, aims to bring responsible unlicensed liquor outlets into the regulated space in a sustainable manner. The paper also seeks to identify mechanisms and criteria that will enable the rezoning of outlets for liquor sales in appropriate residential areas.

But to have a meaningful impact on heavy drinking, South Africa needs to go beyond these legislative interventions and also consider measures that increase price. One example would be to increase the price of alcohol through equalising taxation across alcoholic beverages, according to absolute alcohol content — in other words, the more alcohol a beverage contains, the higher that tax on the product would be.

[WATCH] Why South Africa banned alcohol under the COVID-19 lockdown

Other potential interventions include instituting minimum unit pricing, for example, R8 per standard unit of alcohol (12 g of 15 ml of absolute alcohol), and to improve the labelling of alcohol containers by requiring the placement of standard alcohol units and calories. Warnings on beverage containers about the dangers of alcohol, such as drinking during pregnancy, can also be improved and a track and tracing system can be implemented whereby it will be possible to track products back to the source that sold them. This will help to reduce the sale of alcohol products by unlicensed outlets and to identify counterfeit products and concoctions.

Lastly, making alcohol-related trauma, such as people being injured due to drunk driving or alcohol-related violence, a notifiable condition by using clinical assessment tools, will serve as a barometer of the effectiveness of the implementation of national efforts to reduce harmful use of alcohol, and especially the burden incurred by the health sector.

Most of these measures are in line with the package of evidenced-based interventions launched by the World Health Organisation about two years ago.

Not implementing effective regulatory controls on alcohol during level 2 of the lockdown, raises the risk of increasing community transmission of SARS-CoV-2, the virus that causes COVID-19, and worsens the burden on our health services. The former will not only increase the risk of negative outcomes for people infected, but will also prolong the lockdown.

If we don’t take more seriously the need to use effective measures to curtail heavy drinking and facilitate a safer drinking environment going forward, these problems will continue to plague us.

Charles Parry is the director of the SAMRC’s Alcohol, Tobacco & Other Drugs Research Unit and an extraordinary professor in the department of psychiatry at Stellenbosch University. Follow him on Twitter @profparry

Charles Parry is the Director of the Alcohol, Tobacco & Other Drug Research Unit at the South African Medical Research (SAMRC) and is a former Acting Vice-President of the SAMRC (2012-2014).