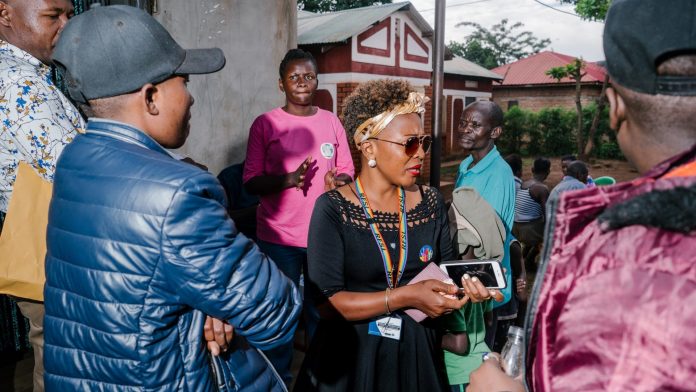 When this queer woman’s activism put her at the centre of a village-ordered hit, a sex worker saved her life. Go behind their story of love, life, fear and solidarity in one of the most homophobic countries in the world.

Maria Nantale is enjoying a beer at a rickety wooden bar after a long day’s work. “Forty people tested today,” she reflects.

“Found three positives. One of them is in denial. She has run away.”

Twice a week, from dawn until dusk, Nantale conducts outreach services in the town of Mbale, about 200kms northeast of Uganda’s capital, Kampala. The aim is to combat HIV among those most at risk: LGBTIQ+ Ugandans, drug users and sex workers.

She asks a local person to play some music while peer educators discuss condom use and sexual health, and invite people to get tested for HIV. Her mobile lab is run by a trio of nurses, a lab technician and a counsellor.

About one in 20 people in the country between the age of 15 and 49 are living with HIV, UNAids says. But in men who have sex with men, HIV prevalence rates are more than double that, according to a 2016 report by Uganda’s Aids Commission. The country’s sex workers, the document shows, are hardest hit: Almost four out of 10 are HIV positive.

The criminalisation of groups like these is a big factor.

Uganda is one of the most homophobic countries in the world. In October, an LGBTIQ+ advocate was killed in the eastern Ugandan town of Jinja, not far from Mbale.

More recently, lawmakers said they would introduce legislation to bring in tougher punishments for homosexual acts, conjuring memories of the so-called “kill the gays” Bill that was proposed in 2013 and initially included the death penalty for certain cases.

As the law stands, homosexual acts can lead to sentences of up to 14 years in prison. LGBTIQ+ people routinely face human and legal rights abuses by employers and police, or violence and harassment in their communities. Because homosexuality is illegal, the LGBTIQ+ community is often hesitant to seek out HIV care and testing.

That’s why Nantale’s primary goal is to reach Mbale’s gay and transgender populations and sex workers.

The problem, says Nantale, is that many people in marginalised groups don’t get tested for the virus due to the double stigma of being both HIV positive and queer in a homophobic country. Nantale realised she needed to offer tests to everybody or risk giving credence to the belief that LGBTIQ+ people are “sick” or diseased.

A further complication is that many rural LGBTIQ+ Ugandans are transient or even homeless, having been ostracised by their families. By inviting entire communities to get tested in a public setting, she creates a safe space.

“It’s a strategy we use so that the LGBTI, sex workers and drug users can come out and get tested,” says Nantale. “Whenever people here have HIV, they run in the opposite direction. That’s what the counselling is for. Telling them it will all be fine.”

As a lesbian herself and an outspoken woman in a male-dominated community, gaining people’s trust was no easy task. “This has taken me years,” she says.

Nantale, director of the Eastern Region Women’s Empowerment Organisation, is an anomaly in Uganda. Most Ugandan LGBTIQ+ activists busy themselves with a plethora of other problems, such as being arrested or extorted by police, or blackmailed by neighbours. Many teenagers are disowned by their families, and some are forced to flee Uganda as refugees.

The method employed by the impeccably dressed, energetic anti-HIV campaigner is to attack that stigma head on, testing and counselling people outside and in public, in front of their friends, neighbours and family.

One afternoon, residents looked on as a tall man in his 40s walked up to the collection of tables, benches and blankets Nantale’s team had set up on a small patch of land in one of Mbale’s crowded, low-income neighbourhoods.

A nurse cleaned the man’s finger with a swab, then lightly pricked the tip. A tiny droplet of blood appeared, which she places into an HIV test kit.

Ten minutes later, his result was announced in front of the dozen or so people who were standing around: negative.

Nantale says that once a few people get over the initial hurdle of participating, the entire neighbourhood tends to join in.

She describes one octogenarian great-grandmother who never misses a test, just to feel a part of what’s going on. Nantale’s peer educators hand out male and female condoms.

“Of the three people who tested positive that day, one was a lesbian, raped by her uncle. She’s devastated.”

Nantale’s approach has garnered the attention of Ugandan LGBTIQ+ rights organisations such as Sexual Minorities Uganda and works with them on HIV awareness. Her work has also attracted international donors such as the United States development agency, which has funded her mobile clinics.

One evening after an outreach session, Nantale spent nearly an hour searching for an HIV-positive trans teenager who had run away, throwing her antiretroviral medication into a drainage ditch out of shame, desperation, or both.

Nantale tries to counsel those who test positive by explaining that HIV is not a death sentence. But for LGBTIQ+ Ugandans, the roots of their depression often go far deeper than concerns about their own health.

“Of the three people who tested positive that day, one was a lesbian, raped by her uncle,” says Nantale. “She’s devastated. She’s resting just nearby.”

Numerous LGBTIQ+ residents say violence is a common occurrence. Nantale herself says she was thrown into the path of a truck by a man hired by a group of village elders.

“They paid a boda boda guy [motorcycle taxi driver] to kill me,” she says. “Homophobes,” she shrugs.

Her LGBTIQ+ activism is what drew the hit, but it was also what saved her. “Fortunately one of our sex workers, he recognised me for giving him free condoms. He put me in his trailer and rushed me to the hospital.”

Nantale spent several weeks in a coma. Now she lives with her partner and their son in a safe house, with a security guard. She takes different routes to her office and to the outreach sessions, to avoid a repeat attack.

Verbal abuse has forced some of Nantale’s friends to leave Mbale for Uganda’s more metropolitan capital.

Life in Kampala offers a certain anonymity and freedom but also leaves many of them feeling isolated, lonely or depressed.

“I could go to Kampala,” says Nantale, “but my grandma lives here. My uncle lives here.”

To move is, in some ways, to leave one’s family behind.

But the same families can ostracise. According to a 2016 global attitudes survey, 53% of Ugandans say that homosexuality should be a crime — the highest margin of all 10 African nations that were polled. But in the same survey, nearly 40% agreed that bullying of LGBT people is a significant problem.

Such awareness, Nantale says, is cause for optimism.

She believes that attitudes in Mbale are beginning to shift. Just five years ago, after Uganda passed its new anti-gay law, Nantale was outed by the local newspapers as a lesbian. She was fired from her job, ridiculed in public. But now entire neighbourhoods know her by name and respect her for her work providing healthcare in neglected communities.

She says: “I want people to focus more on my work, not on my orientation.”

This is an edited version of a feature originally published as part of the Guardian’s Global Development project.