Without accurate data, marginalised groups risk being left behind — again.

Tanzania’s most recent national census tells us that about one in 16 people has a disability in the country’s Ruvuma region. But what if the true number was closer to one in five?

Data is not just for analysts. When properly used, statistics can make a real difference to people’s lives. They can decide, for instance, where services such as hospitals, schools and voting stations are located and who benefits from them.

The international charity Sightsavers works to prevent and treat blindness and advocates for equal rights of people with disabilities in more than 30 countries. The World Bank estimates that about one-billion people globally are living with a disability but in many countries data is based on traditional census questions. Recent research by Sightsavers reveals that this kind of data may be seriously inaccurate.

Sightsavers wanted to find out whether its programmes were meeting the needs of people with disabilities. To do this, it used a short questionnaire developed by a United Nations statistics body, the Washington Group Short Set of Questions. This survey lets respondents gauge their levels of difficulty across six areas such as sight, hearing and mobility on a sliding scale. In contrast, typical census questions only allow “yes” or “no” answers.

When Sightsavers collected data on disability using the Washington Group survey at a rural eye health camp in Tanzania’s southern Ruvuma region, one in five people reported that they experienced severe difficulties. The country’s national 2012 census had found a rate of disability less than half that in the region.

How is the discrepancy accounted for? Unlike the Washington Group questionnaire, Tanzania’s census only interviews the head of the household, so people weren’t reporting their own levels of disability. Also, given the stigma associated with disability, some people may not have wanted to label themselves or their family members “disabled”.

To date, Sightsavers has tested this method in Tanzania, Malawi, Cameroon and India. Where data is available, this approach has revealed significantly higher self-reported rates of impairment than that captured by national censuses.

In all four countries, surveys have revealed higher rates of disability than those found in national censuses.

It is clear that the way people are asked about disability has a huge effect on the accuracy of the data collected. 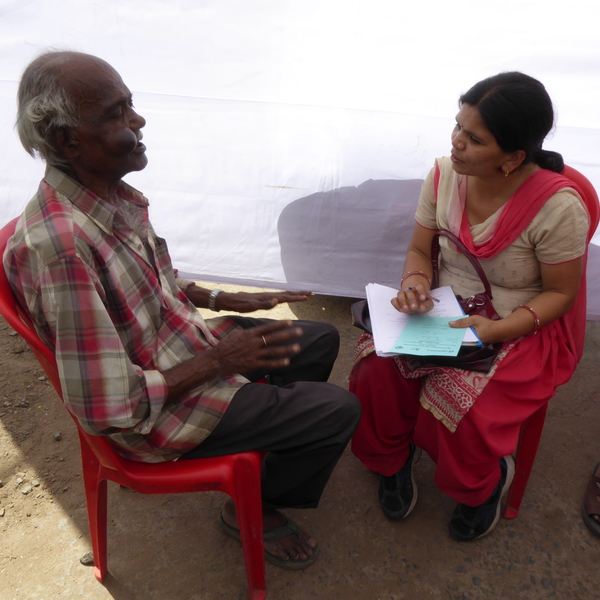 Uma, a data coordinator, conducts an interview with a patient in India. (Sightsavers)

Through the research, Sightsavers also learned that its programmes, run in partnership with health ministries, don’t always reach people with disabilities equally.

In Malawi, for example, the data showed that people with disabilities were more often poorer and therefore less likely to use the eye health services Sightsavers supports. Now that the data is more accurate, the organisation can start to address this problem.

The organisation’s findings prove it’s possible to collect the nuanced, disaggregated data that is crucial for tailoring programmes and budgets to ensure services reach everyone equally.

It’s the kind of data that became a rallying cry for governments, civil society and data collectors globally at the recent  UN World Data Forum in Cape Town. My favourite quote of the week came from  Haishan Fu, development director at the World Bank: “Disaggregation is not the pursuit of data, but of rights and accountability.”

Very little data globally is disaggregated by disability status. Why is that important? The world’s previous set of international development targets, the millennium development goals, mostly measured general improvements. As a result, although there was general progress made on targets, not everyone benefited.

In short, the most marginalised — such as women, people with disabilities and the world’s poorest — benefited least, found a 2015 UN report.

In 2015, the world ushered in the next wave of international targets, the sustainable development goals, but current UN plans to measure the progress towards these targets don’t go far enough towards bridging the data gaps.

Better data is key to giving marginalised people the power of evidence to advocate with their governments for change.

To borrow from UK chief statistician John Pullinger, disaggregated data is data about people — and one billion is too large a number to leave behind.

Dominic Haslam is the director of policy and ­programme strategy for Sightsavers.

Dominic Haslam is the director of policy and ­programme strategy for Sightsavers.