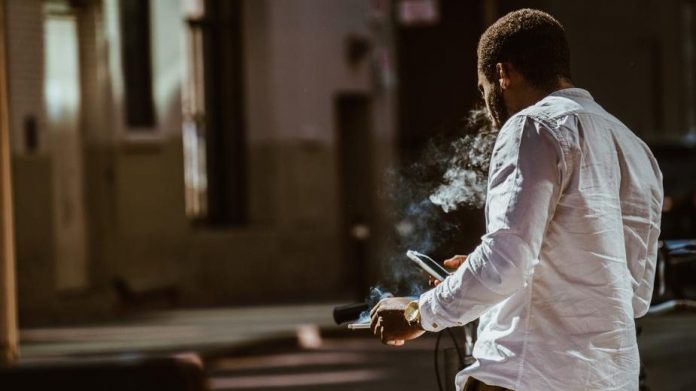 State capture was a godsend for tobacco dealers, writes former Sars official Johann van Loggerenberg in his latest book, which may shed new light on one of the industry’s most popular campaigns.

In 2018, Bhekisisa and the Mail & Guardian published a piece questioning the tactics of the #TakeBackTheTax campaign and the data on which it was based —  produced by an industry-funded Ipsos study. Industry body the Tobacco Institute of Southern Africa (Tisa) maintained that the campaign was not linked in any way to the Tobacco Control Bill introduced earlier that year.

In his new book, “Tobacco Wars: Inside the spy games and dirty tricks of southern Africa’s cigarette trade”, former South African Revenue Services (Sars) employee Johann van Loggerenburg sheds new light on the tobacco industry’s tactics. He describes how prior to #TakeBackTheTax’s launch, traditional Big Tobacco companies planned a coordinated campaign to ensure that “the ‘illicit tobacco trade problem’ received the highest priority from Cabinet and government as a whole, before any ‘new or controversial legislation’ was to be considered.” This is an extract from the book.

Suddenly, there was space again for them to carry on with their dirty tricks. The pressure was off them… and instead, we at Sars were suddenly on the back foot. At the same time, even the new kids on the block, smaller, newer manufacturers belonging to Fair-Trade Independent Tobacco Association (Fita), heaved a sigh of relief to see our backs. The pressure was off them too.

One of the guys would later admit to me in conversations: “When you guys were out of the picture, it was a relief. You really had us. You really understood the game. We got away with it all. I can tell you this now because you are no longer there, but we got away with it. What happened at Sars suited us fine. From then on, we printed money.”

With all of these developments, the big boys — traditionally large and established tobacco firms — had to come up with a new plan. The playing fields had dramatically changed all of a sudden.

“What happened at Sars suited us fine. From then on, we printed money.”

Where, once, only the mighty voice of Tisa was given a public platform, the first sign of change was visible in May 2018 when not only Tisa but also Fita and a range of state agencies presented to Parliament’s standing committee on finance on the illicit trade in tobacco.

It was Fita that introduced a new angle to the debate. Their chairperson Sinenhlanhla Mnguni remarked to the committee that billions of rand were being pilfered out of the economy by a group of companies through base erosion and profit-sharing schemes. He believed government should afford more attention to levelling the tobacco industry playing field to ensure small businesses also have a voice. I am told that Tisa was rather surprised to find the Fita people present that day.

Obviously, the Tisa members had to change track. I got to hear of it by chance when an email from Tisa was passed onto me. This was clearly a summary of a bigger plan. Firstly, said the emails, Tisa wanted the “illicit tobacco trade problem” to receive the highest priority from Cabinet and government as a whole, before any “new or controversial legislation” was to be considered. The plan then set out four key angles that Tisa would pursue.

On 5 July 2018, a large press conference was called by Tisa. The main speaker was longtime Tisa chairperson, Francois van der Merwe. Journalists from media houses across the country received invitations. Van der Merwe presented a report that Tisa had commissioned.

According to Tisa’s press statement issued on the day of the conference: “The Ipsos Study is the most robust scientific analysis of the multibillion-rand illegal cigarette market ever carried out in South Africa. It has been peer-reviewed and independently validated. It shows that the illegal market exploded since Sars ordered that investigations and the inspection of cigarette factories be stopped, under suspended Commissioner Tom Moyane.

The report also found that just one manufacturer’s products, Gold Leaf Tobacco Corporation, account for 75% of the illegal trade in the country. This is despite Gold Leaf Tobacco Corporation’s cigarettes being made in a local factory officially licensed by Sars.” The loss to South African taxpayers from the illicit market was estimated at almost R600-million every month, or more than R7-billion in 2016, the report alleged.

Tisa’s campaign had already got underway before the press conference began. On 27 June 2018, a website was published on the internet: www.takebackthetax.org.

It basically takes you to a petition that reads:

“I implore the South African Revenue Service, the Parliament of the Republic of South Africa and law enforcement agencies to act with urgency and take decisive steps in combating the trade of illegal cigarettes. By doing so we will stop the South African economy from losing R7-billion in potential tax revenue every year. I ask that the aforementioned parties conduct thorough investigations into claims of tax evasion by all cigarette manufacturers, to implement and enforce new laws to mitigate the negative impact that illegal cigarettes have on low-income communities.”

Tisa’s campaign didn’t get complete buy-in. Within days, media reports began to question the underlying basis of the Ipsos findings. Several people tried to lay their hands on the actual research report as opposed to the slideshow and summary presented by Tisa at their press conference. Tisa refused to hand it over or make it public. Then claims started surfacing that the big boys were paying social media celebrities and media outlets in a suspected ploy to undermine government efforts to curb tobacco use in South Africa.

According to the Bhekisisa Centre for Health Journalism, Tisa had apparently been funding a social media campaign and a number of adverts. Journalist Joan van Dyk accused Tisa of not being very forthcoming about their campaign. “If you’re not disclosing that you have been paid to punt this campaign with money from the tobacco industry, that’s a problem. They didn’t want to tell us who else they were paying, and they have admitted to paying other people.”

In September 2018, Bhekisisa got confirmation from Tisa that it had paid the social activist and media personality Yusuf Abramjee to help promote the campaign. Abramjee explained his position somewhat by saying that he “had not been paid to endorse the project but I have received remuneration for promoting the campaign ads on social media, just like traditional media is paid to run the ads in newspapers… and TV. I am a long-standing anti-crime activist. I support this campaign wholeheartedly as I believe illegal cigarettes have had a free run for far too long and are costing our country much-needed taxes and jobs.”

Tisa hit back at Bhekisisa, saying that they were willing to disclose the underlying data, “which is extensive, technical and complete to organisations who are qualified to analyse it and who will guarantee its confidentiality.” Bhekisisa retorted by saying they didn’t intend to analyse the data themselves, but instead wished to provide it to the University of Cape Town Professor Corne van Walbeek.

Tisa declined to comment in relation to this edited extract from Van Loggerenberg’s book, “Tobacco Wars: Inside the spy games and dirty tricks of southern Africa’s cigarette trade” is published by Tafelberg. Van Loggerenberg joined Sars in 1998 and ultimately led some of its investigations units until he resigned in 2015 when he became a target of various plots to capture and disable the revenue service. Today, he is a private tax practitioner and advisory consultant.

Van Loggerenberg joined Sars in 1998 and ultimately led some of its investigations units until he resigned in 2015 when he became a target of various plots to capture and disable the revenue service. Today, he is a private tax practitioner and advisory consultant.