The tobacco industry is paying social media celebrities in what could be a ploy to undermine new government efforts to curb tobacco use in the country.

“VAT doesn’t have to increase if we take back our R7-billion.”

Adverts with slogans such as this, paired with the hashtag #TakeBackTheTax, have been splashed across newspapers, including the Mail & Guardian, and in social media for weeks. The adverts argue that if the country curbed the illicit cigarette trade, the tax collected from the sale of legal cigarettes could build 127 000 homes, hire 52 000 anti-corruption investigators, and even end the country’s load-shedding woes.

The ads, and a social media campaign, are paid for by the Tobacco Institute of Southern Africa (Tisa), which represents tobacco farmers and multinationals such as Philip Morris International and British American Tobacco.

Tisa chairperson Francois van der Merwe confirmed that the campaign included paying social media commentators for “tweeting our adverts and the link to our website”.

Last month, former journalist Yusuf Abramjee was one of the dozens of people who tweeted about the campaign, saying, “You can help take back R7-billion in 60 seconds” with the hashtag #TakeBackTheTax. 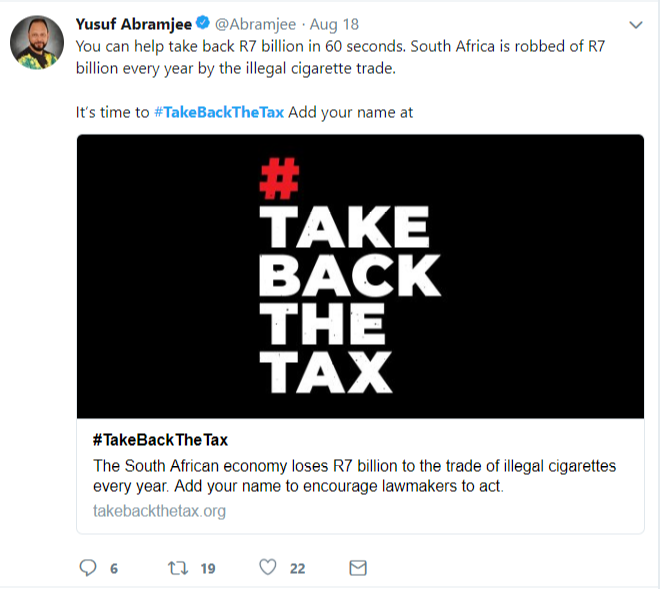 Abramjee says he had “not been paid to endorse the project but I have received remuneration for promoting the campaign ads on social media, just like traditional media is paid to run the ads in newspapers (like the advert in the M&G) and TV”.

Abramjee explains: “I am a long-standing anti-crime activist. I support this campaign wholeheartedly as I believe illegal cigarettes have had a free run for too long and are costing our country much-needed taxes and jobs.” 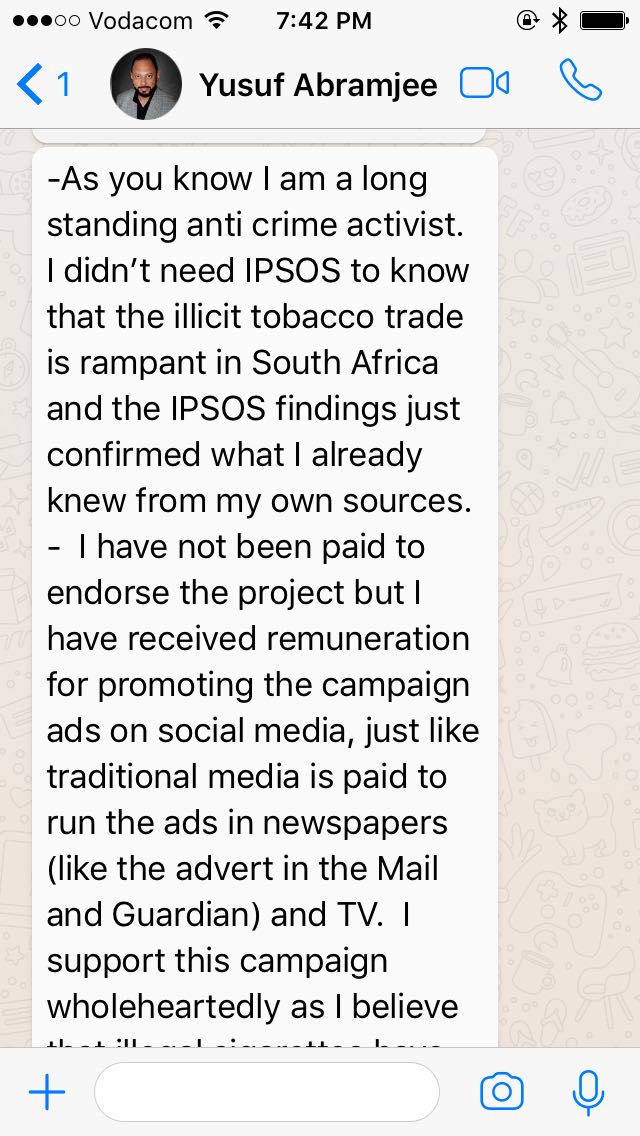 Van der Merwe would not release the names of other people paid as part of the campaign.

Tisa’s advertising onslaught coincides with the July release of proposed anti-tobacco legislation that would curtail advertising and smoking in public places, with violators facing fines and even up to three months in jail. Tisa argues government has drafted new legislation in part based on faulty economic impact data.

But the figures at the centre of Tisa’s campaign come from a Tisa-commissioned study by market research company Ipsos, leading some public health experts to question the lobby group’s motives.

The #TakeBackTheTax series is the tobacco industry’s latest campaign and follows a similar one on illegal cigarettes. That campaign was recalled in 2014 by the Advertising Standards Authority of South Africa (ASASA), which called it “misleading”.

Read an excerpt from the ASASA’s ruling:

Tisa and Ipsos refused to provide Bhekisisa with a copy of the study cited in the latest ads or the data on which figures were based.

Van der Merwe argues that the information is Tisa’s property and that because no formal report has been written, raw data was open to misinterpretation. No one would let Bhekisisa see the written methodology used for the survey. But Ispos lead researcher Erika Terblanche says researchers visited shops in areas across the country over two weeks to track how many shops sold cigarette packs for less than R17.85 — the minimum price for legal cigarettes in South Africa.

The research found that 30% of packs were illegal, Terblanche says. She argues enough shops were visited in enough communities to make the findings nationally representative, or applicable to South Africa as a whole.

The Foundation For a Smoke-Free World, funded by Philip Morris International, currently seeks to support research into the effects of nicotine products such as e-cigarettes.

Van der Merwe explains: “We support the government’s health objective [to reduce smoking] because tobacco is harmful. You can write as many new laws as you want, but until we curb illegal trade, people won’t stop smoking.” 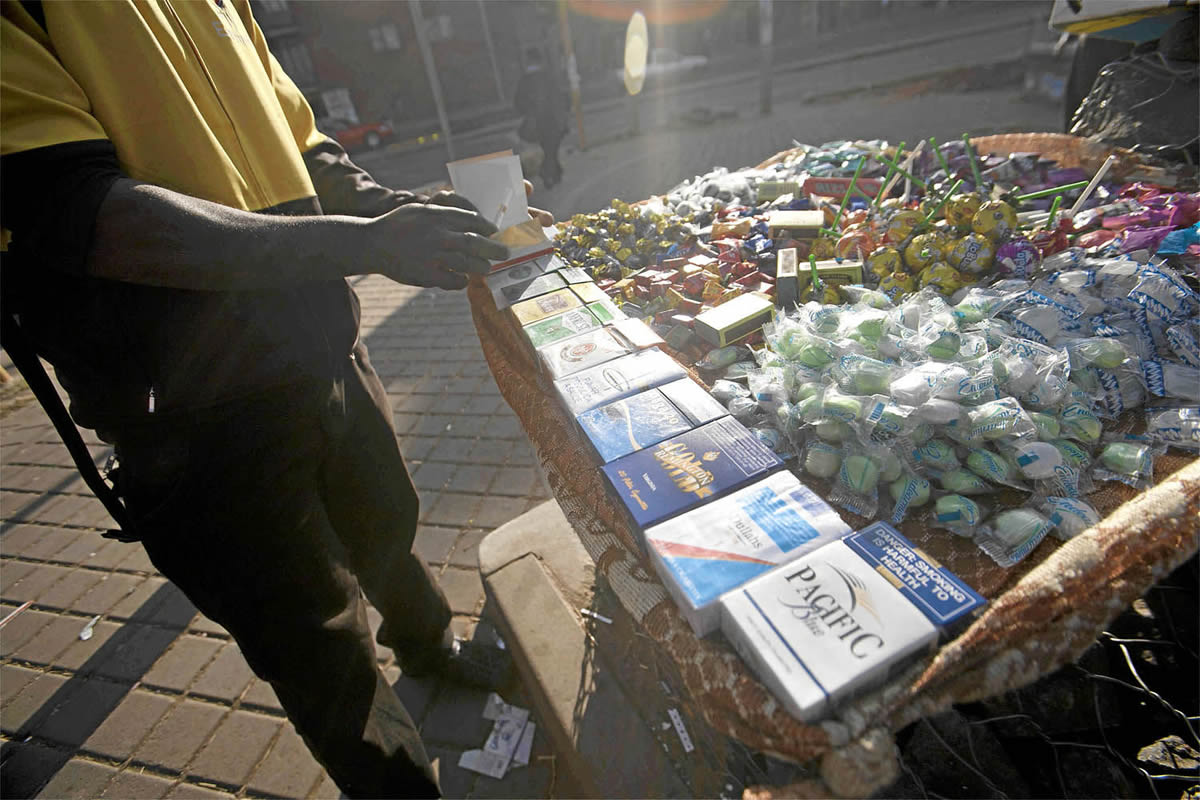 The corner rush: Industry-funded research says that 30% of all cigarettes sold could be illegal but lobbyists aren’t keen to share the raw data or the methodology.

Corné van Walbeek is an economics professor at the University of Cape Town and head of the university’s Economics of Tobacco Control Project. While Van Walbeek was not allowed to see the full methodology or data but says it seems like the way it was done seems sound. However, he has refused to endorse the findings. The full study has only been released publicly in the form of PowerPoint slides. He did not see the full methodology or data.

“All [Tisa] did was sit me down for two hours and showed me what could have been a sanitised version of the truth,” Van Walbeek says.

Ipsos is now revisiting the sample sites for further research.

Van Walbeek says there is no arguing that the illicit cigarette trade has grown dramatically since 2015. But Tisa and its members are using the issue to argue that the tobacco control bill will fail.

“The survey is being misused by Tisa members to come up with a narrative that says, ‘We are the good guys … [We are] here to support the government in getting scoundrels in the dock,’” he says. “Tisa’s arguing the South African Revenue Service must get off its backside … and that we can buy nice things with the money we’ve lost. That touches a nerve [with the public].”

Tisa’s R7-billion calculation is also flawed, he explains. If the illegal tobacco sector were shut down, Tisa says everyone would pay more taxes — but Van Walbeek counters fewer people would be able to afford to smoke, so the state would collect less than R7-billion in tobacco taxes.

Treasury data from 2013 reveals a 40% drop in cigarette consumption since South Africa imposed higher duty taxes for tobacco manufacturers in the 1990s. This kind of tax is the most effective tobacco control measure, according to the International Agency for Research on Cancer.

Local data on the societal costs of tobacco use is extremely limited, according to national director for non-communicable diseases Lynn Moeng-Mahlangu. But a 2004 study published in the journal Tobacco Control attributed about 8% of all deaths in the country to smoking.

The research, which reviewed about 5 300 death records, found that almost 60% of lung cancer deaths and nearly four out of every 10 deaths from chronic lung disease, also known as chronic obstructive pulmonary disease, could be attributable to smoking.

Moeng-Mahlangu argues Tisa’s campaign is misleading and conflates the cost of the illicit trade and government’s efforts to protect non-smokers.

The illegal tobacco trade has long been a public relations darling for South Africa’s tobacco lobby, Van Walbeek says. In a 2014 study published in Tobacco Control, Van Walbeek showed how Tisa adjusted its previous estimates of the illicit trade to create the illusion that it had been rapidly growing.

He wrote: “By rewriting history about the magnitude of the illicit market, [the tobacco industry] has yet again shown itself as an untrustworthy source of information.”

[Updated 11:47am 14 September 2018. This story was updated to reflect additional comments]